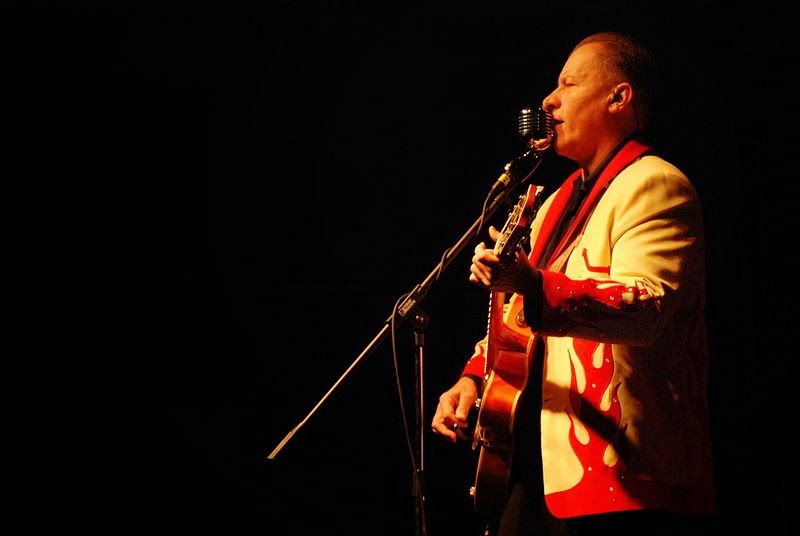 My tolerance for "funny songs" is pretty low. But if you can make me smile while we're rocking, I'm with you. Jim Heath writes a lot of humorous songs, but nearly always foregrounds his love of eighth note, supercharged rock and roll and honky tonk. "400 Bucks" from The Full-Custom Gospel Sounds Of The Reverend Horton Heat is a prime example, but there are plenty of other grinning songs—"Bales Of Cocaine," "Baby, I'm Drunk," "Galaxy 500," "Please Don't Take The Baby To The Liquor Store," and "Let Me Teach You How To Eat," for starters.

Hey, I drive a Ford, too! Well, a Ford Taurus. I'm no gear head. Though I gawk like everyone else at cool old cars at shows or on the street, my fascination with and knowledge of custom-built or restored 1940s and '50s automobiles end there. But that doesn't matter: Heath's car songs are so infectious and affectionately-written that it doesn't matter if I can't tell my flathead motor from my four-twenties under the hood from my suicide door. I'll hop in, anyway. "Yeah kids, that's 'Like A Rocket.' That's Rock and roll!"

There's something to be said for the bang-for-buck value that you get at a Reverend Horton Heat show. He's a true pro: I've never seen a down show, a phone-in performance, or a truncated gig. He always delivers. "Can't call in sick," he sings, "never once late."

4.) He's not afraid to write personal songs within the limitations of genre.

I've said on many occasions that I tend to look for art in art, not in rock and roll. That's not to say that a rock and roller can't mine the self for poignancy. "Smell Of Gasoline" explores regrets, boy-girl politics, and shy, adolescent haplessness, while "Scenery Going By" addresses mortality, missed opportunities, and a wasted life, not to mention the suicidal impulse:

Lookin' out my window there's a world going by
Out here on this highway is probably how I'll die
I've been everywhere, haven't seen a thing
But that's what you get when you play guitar and sing

Asked about writing songs in the tradition of the rockabilly revival, Heath said," "I’m thinking more of, ‘Should this chord be an augmented chord, or just a straight dominant chord?,’ you know? I’m thinking about, ‘Is this lyric going to work better in a slower song because the story is so good?’ I don’t have time to think about genres, or what’s watered down . . . I don’t go there. I’m thinking about the nuts and bolts of what makes music happen—stuff that is generally lost on 90 percent of everybody who has opinions about music."

Heath and his band have hundreds and hundreds of shows under his belt, and he shows no signs of letting up. "It’s so weird. You know, we live in a world where it’s all about retirement. ‘Oh, I can retire,’ blah blah blah. I never want to retire," he said last year. "Willie Nelson is still out there doing gigs—as many gigs as we are probably. Think about a guy like Willie. He got his start as a young guy playing bass with Ray Price way back in the ’50s. Well, Ray Price is out there playing a gig tonight somewhere. So really, Willie Nelson isn’t even an old guy."

You have GREAT taste in music. The Rev continues to amaze me both in both his longevity, and his "heads-down, no-nonsense, mindless boogie" without end. Extra meaty, that one :+)

And thanks also to you for all your posts, and your baseball ones especially. I use them to educate younger baseball fans as to the history of the game. Well-done!

Thanks so much for reading—and sharing, DrBOP! I'm grateful.