In the summer of 1978 my dad, mom, and five siblings scrunched into our Ford Gran Torino station wagon and drove from suburban Washington D.C. to the small town of Coldwater in rural, far western Ohio, a trip we made annually to visit my mom's parents and her hometown. I loved cruising the Pennsylvania and Ohio turnpikes for nine or so hours, leaving suburbia behind, armed with a cache of Richie Rich and Archie comics and candy (and car sickness pills). I have an indelible memory from this particular trip: staring idly out the window as night came on, the radio tuned to the Cincinnati Reds game as Pete Rose tried to keep a hitting streak alive. My mom's dad was born and raised in western Ohio (he was mayor of Coldwater for a time) and was a staunch Reds fan. We'd often arrive after dark, and I remember seeing through the living room window my grandfather's silhouette as he stood up from his chair where he'd been sitting listening to the Reds game. I associate these mid-summer trips and damp, muggy Ohio with baseball, specifically Big Red Machine baseball: Rose's hustle, Johnny Bench's restaurant in Cincinnati with the giant hand-shaped bar chairs, George Foster's herculean homers.

That summer, Rose's 44-game hitting streak—it began on June 14 in Cincinnati and ended on August 1 against Gene Garber and the Atlanta Braves—was epic to me, a striving for something that seemed impossible, mythically so. I didn't have a home team; my family pulled for the Baltimore Orioles' by default, the Washington Senators having decamped for Texas in 1972, and so I mostly watched American League baseball, tuning in to snowy Channel 11 to catch the O's. When I wanted to watch National League ball—when I wanted to see Rose or Foster or Mike Schmidt or Steve Garvey or J.R. Richard—I had to wait for NBC's Saturday Game of the Week, ABC's Monday Night Baseball, the All-Star Game, or the playoffs. This scarcity made Rose's hitting streak for me all the more distant, other-worldly: I'd follow it in the Washington Post Sports section, mostly, maybe catch a highlight on local news at 10 or 11. And so as my family drove closer to south-western Ohio and my dad was able to tune in the game, Rose's streak became clearer to me, and not only in reception. This is happening now, I remember thinking. The top of my head came off as I gazed out the window at the dusk dark, the shapes of barns and grain silos against enormous corn fields silhouetted against an even bigger dark sky, as Rose took a fastball low, chopped a breaking pitch foul, the smell of gasoline and manure and the rhythmic hum of the two-lane roads in rural Ohio hypnotic, as I wondered where exactly Riverfront Stadium is as Rose looked at a ball low, and then drove the next pitch into center field. I pictured Rose holding his helmet tightly onto his bushy head as he rounded first. This was 1978: there was no Internet, satellite radio, or ESPN. The drama in my head was all I had, and it was everything. Roger Angell calls this "the interior game." I watched a baseball game last night, but my vision of Rose hitting in 1978 is just as vivid. Childhood: Pete Rose, baseball, a streak, farms, and the black Ohio night sky. 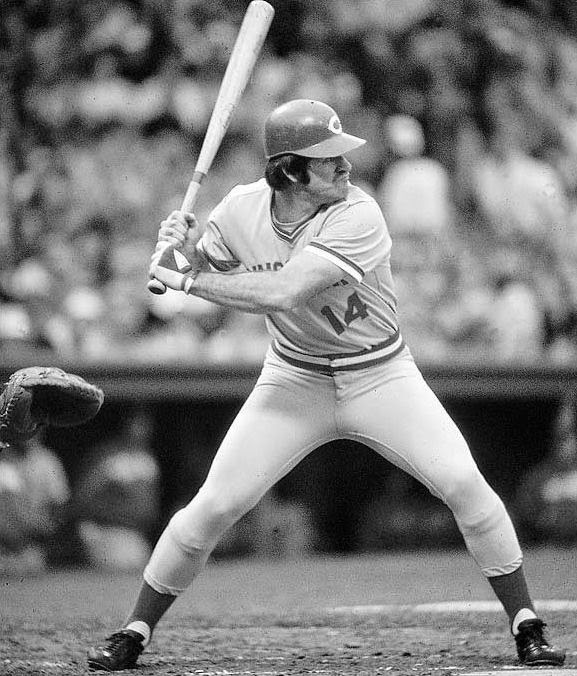