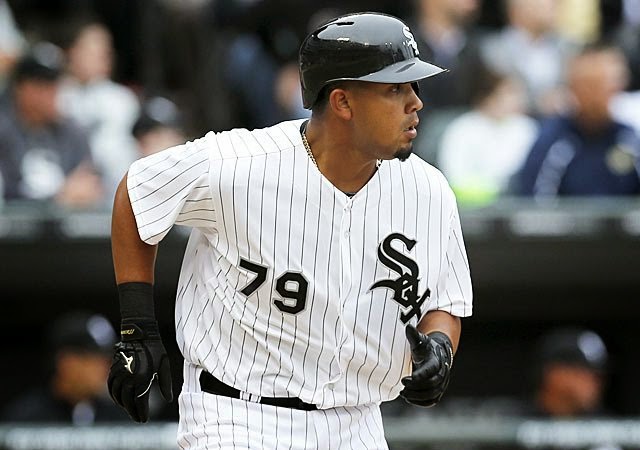 The 2014 Chicago White Sox baseball season is a wash. Poor relief pitching and inconsistent hitting have discouraged winning streaks and have kept the team below .500 for much of the season. The Central Division-leading Detroit Tigers are poised to pull away for good (again). One of the bright spots for the White Sox this season has been the arrival of Jose Abreu, a Cuban-born slugger who's having one of the best Sox rookie campaigns in history. Already he's been named American League Rookie of the Month three times and Player of the Month twice; he also was named to the All Star team. As I write, he 's hitting .307, with an OPS of .911. He's slugged 31 homers, knocked 28 doubles, and driven in 86. He's struck out 95 times, but many of those whiffs came in a mid-season funk when he was trying to hit everything out of the park. Since then, his plate appearances have only gotten more impressive; he hits the ball to all fields, lays off close pitches, and seems to have a game-plan with every pitch. With his muscular stance and bat held high he reminds me a bit of Albert Pujols, and by sending balls screaming in all directions he's reminded some of newly-minted Hall of Famer Frank Thomas. But it's too early. He's a serious player—you can hear the gears whirring when he's at the plate—with a mature attitude to the game and its daily knack for humbling hot-streak players and exposing their weaknesses. But he's not sober, humorless, or distant. He's young enough to have a long career ahead of him, barring injury, but he's been around long enough that he takes the game's ups and downs in stride. His patience at the plate is complemented by a swing so fast it startles. At a game against the San Fransisco Giants at U.S. Cellular on June 18, I saw Abreu shoot a low line-drive homer to left that got out so quick that everyone in the park, with the exception of Abreu himself, looked baffled.

What I love about Abreu—and why he's quickly becoming a favorite player of mine—is his business-like nonchalance about his gifts that masks his concentration and knowledge. He's not a show-boat, and he doesn't sulk when he fails. His facial expression remains the same before a pitch, as he's crushing the pitch, and when he's standing on second after another loud double. Mr. Abreu, Baseball Player, has gone to work. He'll be refreshing and fun to watch for a long time.