What Do You Hear? 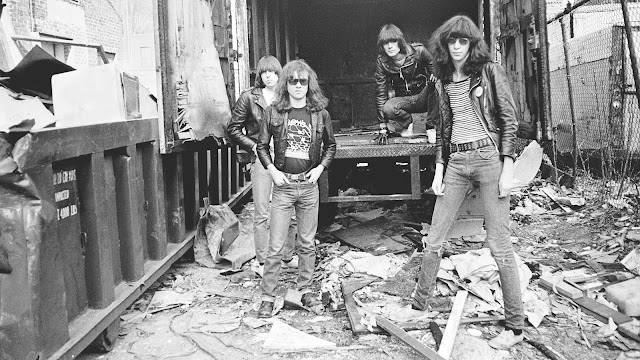 Greil Marcus has always been unimpressed with the Punk Rock scene in New York City of the mid- and late-70s. Thus it was interesting to read his 1977 Village Voice review of the Ramones' third album, Rocket To Russia (archived here) as he begins by praising the band's melodies and hooks‚ particularly on "Rockaway Beach" and "Sheena Is A Punk Rocker," which he smartly compares to Billy Bland's “Let The Little Girl Dance” from 1960. "The melodies are right on the surface, and they’re delicious: you can float on the changes," he writes. Soon enough, though, he arrives at his standard complaint with the band:


The central weakness of the Ramones remains: there’s no conviction in their music. This is particularly evident on a record where they have little to be ironic about (“Cretin Hop” is the only song here that might be called cruel, and that’s pushing it). Foregoing the blood and guts of “Blitzkrieg Bop” or “You’re Gonna Kill That Girl,” the Ramones have made a very straightforward album–which is probably why I like it–but while some may have found them seriously ironic, or ironically serious, in the past, their dropping of this pose/device, and the subject matter that demands it, simply shows up their inability to put emotional force behind what they say. “We’re a Happy Family,” a good song (as written) about a nuclear disaster area (“Daddy’s telling lies/Baby’s eating flies”) might have been truly sordid, but though the Ramones sing as if they mean to communicate bitterness, the song doesn’t cut, nor is it funny.

Down-and-out as they may appear, the Ramones sound spoiled: smug. There’s no conviction in their music because they don’t sing from the inside of the personae they posit; they make insulated music. It’s music that, for me, never puts across the feeling that something’s at stake when the band plays; none of their songs sound as if anything would be lost if they weren’t sung. To say that that’s the point isn’t good enough. It’s why, at this point, the group’s music does not compare to Alice Cooper’s “Eighteen” or just about anything by the Clash or the Sex Pistols. Much as they may intimidate AM radio, the Ramones aren’t dangerous yet. Until they get inside the roles they assume, they won’t be.

Marcus raises an interesting issue: that rock and roll might matter only to the degree that it might fall apart when played genuinely, needfully, that what's at stake has to be enormous and maybe frightening in its intensity. How do we define R&R conviction, as I-know-it-when-I-feel-it? I'm not sure that I fully agree with Marcus about the Ramones. Yes, the band was cartoony, cultivating leather-and-safety-pin Punk Rock personae, but the departed Dee Dee Ramone and Tommy Ramone wrote songs out of genuine hungers and dysfunction. The Ramones were as much a pop band as a punk rock band; they wanted the airwaves, and they dressed up their genuine borough disaffection, mental duress, and drug addictions behind snottiness, 60s Top 40 radio changes, and caricature. I think that on "I Just Want To Have Something To Do" (on 1978's Road To Ruin), the boredom, angst, and desperation is full of conviction. Whatever persona Joey's singing from here and whatever's at stake, it always sounds real to me, not smug:

Shortly after reading Marcus's review, I listened to the Buzzcocks' great 1978 single "What Do I Get?" The frenetic middle eight in is, to my ears, among the most sincere and desperate in any rock and roll song from the 1970s. Who's the "you"?


I only get sleepless nights
Alone here in my half-empty bed
For you things seem to turn out right
I wish, they'd only happen to me instead


Marcus complains that the Ramones can't—or won't—get inside the roles they assume. In "What Do I Get?" Pete Shelley sings as if his body is surprising, maybe embarrassing, him with its admission of need and sorrow (and self-pity). Do we get this level of emotional intensity, of vulnerability wrapped up in passionate, hook-filled rock and roll in the Ramones'? Is that what they were after?
Posted by Joe Bonomo at 2:11 PM

I don't hear the anger in the Ramones that I hear in the Sex Pistols or Clash. Maybe that's why Marcus thinks there wasn't much conviction in their music. I understand about how the music "has to be enormous and maybe frightening in its intensity", but the Ramones just weren't that kind of band.

Two reasons they were great were their pop sensibility and their humor, intentional or not. I don't think that "We're A Happy Family" could ever have been sordid, Joey's laments are over the top funny, and how can you not laugh at "Daddy likes men"?

I don't hear any smugness, there's just as much conviction with their music as anyone else's. If there's anger or frustration, the humor and melody tone it down. Joey couldn't spew bile and disgust like Johnny Rotten; "Glad To See You Go" isn't all that dangerous.

If you ever had any doubts about their conviction and intensity, you should have seen them live, they never held back.

No doubts here, M! I love the band, and saw them several times starting in 1984. Fantastic live band. I think that Marcus's comments about something having to be at stake in R&R are interesting, and worth discussing. As I wrote, I disagree with him about the Ramones. They weren't his band, though I often wonder if his take on the NYC 70s scene would've been different had he grown there and not N CA.

I understand what Marcus means about something having to be at stake, I remember some of what he wrote about '68 Comeback Elvis in Mystery Train. Moments like that don't seem to come up very often, though.

I still don't get the "smug" Ramones remark.