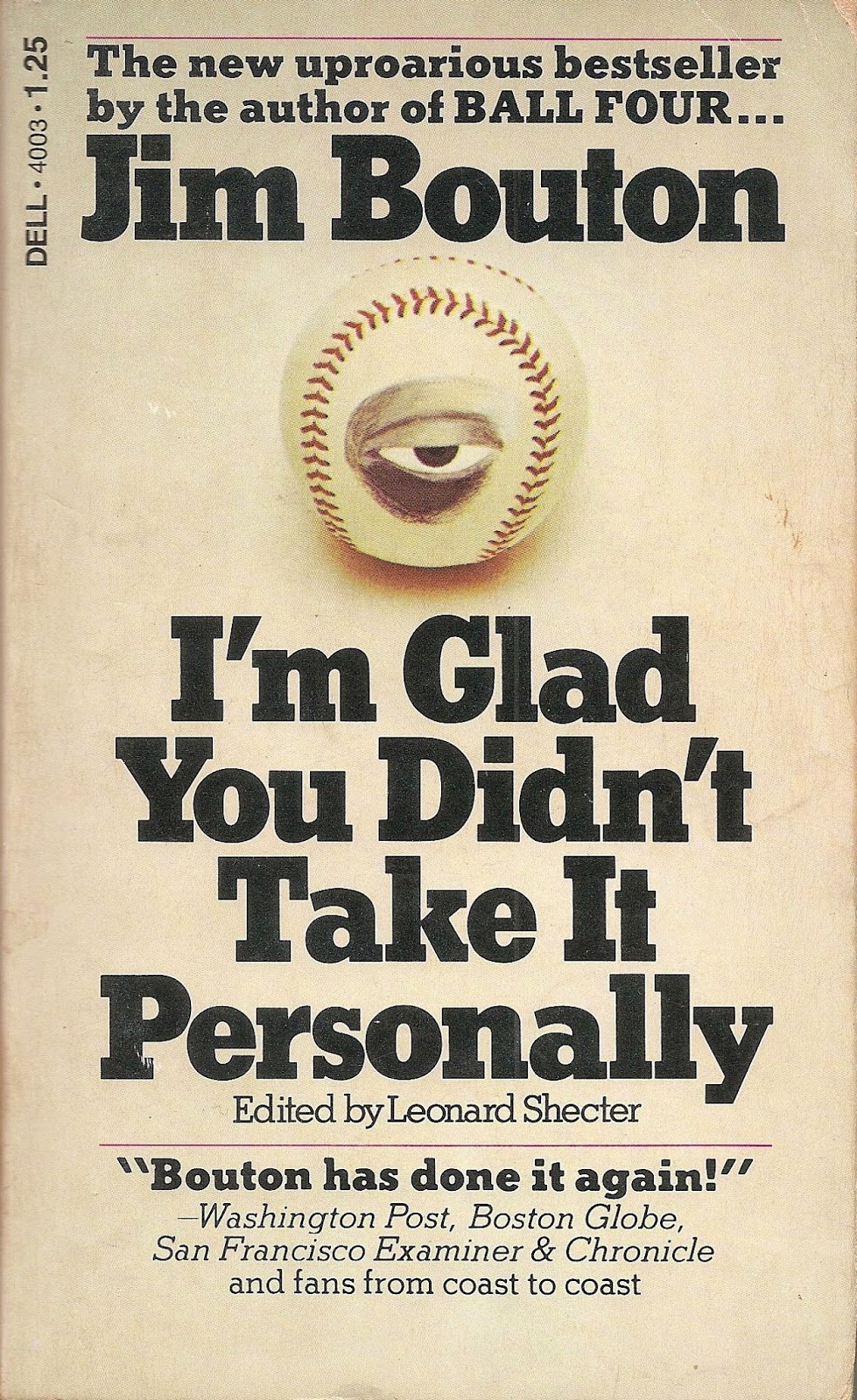 In 1969, knuckleballer Jim Bouton was pitching for the expansion Seattle Pilots (and later in the season for the Houston Astros). During the year he kept a journal in which he reflected upon aspects of the game and industry, and detailed many notable players’ booze- and amphetamine-fueled escapades and general louche behavior both in the clubhouse and on the road that hadn’t been reported on by mainstream sportswriters. A year later Bouton published his insider look as Ball Four. Edited by Leonard Shecter, the book became a best-seller, Bouton a coveted talk-show celebrity. But the book also alienated many current and former players who felt that Bouton had betrayed them and sullied their public images. Mickey Mantle was notoriously upset with him. Pete Rose taunted him at games. Baseball Commissioner Bowie Kuhn, the game’s self-appointed moralist, called Ball Four “detrimental to baseball.”

Midway through his under-appreciated follow-up book, I’m Glad You Didn’t Take It Personally, published in 1971 and also edited by Shecter, Bouton pauses to reflect on the damage that Ball Four may have caused:


There’s a song written by David Frishberg that appears in an album called Oklahoma Toad. The title of the song is “Van Lingle Mungo.” The words are, basically, just the names of ballplayers out of Frishberg’s childhood and they’re sung one after the other in a kind of lilting refrain: Whitey Kurowski, Johnny Sain, Eddie Jost, Johnny Pesky, Ferris Fain, Van Lingle Mungo. It’s a very pleasant song, sad and haunting. Here is a man reliving his childhood through the names of old baseball players, men he admired and respected, maybe loved.

While listening, Bouton admits to twinges of regret about having written Ball Four. “I felt that perhaps a kid reading it would be so turned off to baseball heroes that he would never want to write songs about them when he grew up, that he would never feel nostalgia about them,” Bouton writes. “I wondered if I had really smashed heroes, whether I had ruined the game for the kids and ruined it for baseball fans.”

Chastened, Bouton acknowledges going through fanish stages when he was a kid, adoring the New York Giants, Alvin Dark, Dusty Rhodes, Sal Maglie. “Even now, thinking back, I can remember exactly how I felt about those men,” he writes. “There is still that same rush of good feeling when I think about them and what they meant to me,” adding, “my memories of them are still so happy that if I could write songs I’d write one about them.”

And yet, Bouton insists, there are two sides to everyone. “There’s the Dusty Rhodes who won a World Series pinch-hitting and the Dusty Rhodes who drove a bus in the World’s Fair. I could write a song about one of them. But I’m writing no songs about the Alvin Dark who ignores kids who want his autograph. And I’ll write no songs about Sal Maglie, the pitching coach, my pitching coach, who did me more harm than good.” He acknowledges that it’s possible to see people as both heroes and as flawed creatures, “imperfect, narrow sometimes, even not very good at what they do. I didn’t smash any heroes or ruin the game for anybody. You want heroes, you can have them. Heroes exist only in the mind anyway. David Frishberg has his heroes. I have mine. I just wish I could write songs.”

A few years ago, NBC News reported that the breaking pitch—the pitch that bends or, out of some hurlers’ hands, seems to “drop off the table” as it approaches home plate—is a false impression. Researchers Arthur Shapiro and Zhong-Lin Lu observed that batters focus on the ball as it leaves the pitcher, but when the ball nears the plate batters quickly alternate to peripheral vision, then return to central vision as the ball arrives at the plate. Shapiro and Lu note that this shift in focus can cause the ball to appear to break as much as a foot. Lu recognizes that for fans watching games on television a curveball seems to break when seen from behind home plate. “That is a geometric illusion,” he said, “caused by the fact that for the first part of a pitch, the viewer sees little or no vertical drop. Because the pitcher throws the ball at a slight upward angle, the first part of the pitch appears more or less flat. Then the drop seen near home plate surprises the eye.” 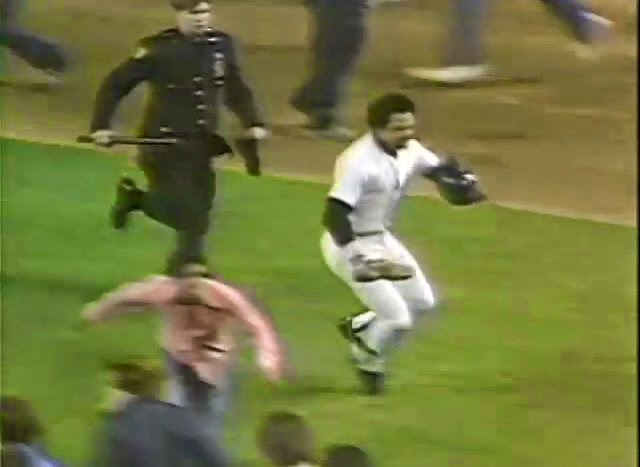 Nostalgia deceives as sneakily. The word, after nostos, its Greek root, evokes wistfulness and an almost painful desire to return home, but the questions are, “Whose home?”, “Where is it?”, and “Did it ever exist?” A couple of months ago I wrote about Game Six of the 1977 World Series in which Reggie Jackson smacked three home runs on three consecutive pitches. Remembering the onfield spectacle afterward—Jackson ran for his life to the dugout through the crazed crowd—I’m nostalgic for homer heroics, delirious fans, and being allowed to stay up late to watch all the madness, but this ignores the brutal realities of the era, the cultural turmoil beneath the spectacle. As Jim Bouton reminds us, there are always two sides: playing and braying; celebration and violence; joy and danger. (Nostalgia only exists in the mind anyway.) There are no pleasant songs about urban collapse, reckless violence, class inequities, erupting crowds, a city nearly coming apart at the seams. Nostalgia requires that we elide darkness, blinded as we are by the lights calling us back home, wherever that is.

Bouton worries that Ball Four may have affected the game’s presumed innocence and its roster of burnished heroes, but nostalgia is very forgiving; that’s why we talk about the “good old” days, not the bad ones. When we’re nostalgic for the game of baseball we’re usually recalling isolated moments, images, still-frames from memory: a coveted Topps baseball card; a sun-warmed glove in the backyard; a favorite player rounding second; an enemy player overthrowing first, allowing your team to score the winning run; your dad’s moist eyes in the rec room. Nostalgists, all of us, prefer the close-up, not the wide-angle, the soft-focus, not the harsh realities.
Posted by Joe Bonomo at 1:17 PM

Another good piece, Joe, thanks. Ball Four's been one of my favorite books since its release. I remember Bouton being interviewed by several sportscasters on a Philly TV station, I don't think they had one good comment about him or his book. The harshest criticisms were the Mickey Mantle anecdotes. I always thought it was good to see Mantle and others as human beings, not golden idols. The story about Mantle hitting a game winning pinch hit homer with a hangover was one of the best.

Bouton pitched for a few years in a semi-pro tournament in Bridgeton NJ, I never made the ride down there. It would have been fun to tell him to "smoke him inside, and we'll go pound some Buds".

Thanks, M! Yep, Bouton is terrific, and ahead of his time. Have you read ...Personally? It's a good read, mostly about the reactions to Ball Four.

Yes, I did, Joe, but I haven't read it in years. I just opened it at page 120, which starts "...Pepitone showed up at the park hung over out of his mind". It was the first game of a double header; Pepitone played the second and hit a homer. That's a ball player! I need to read them both again.