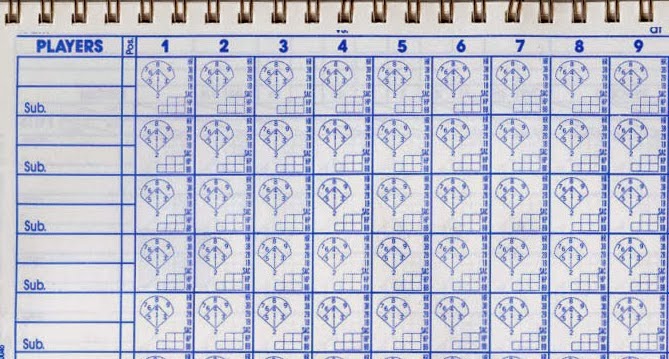 In the May 22, 1995 issue of The New Yorker, Roger Angell wrote, "With some baseball games, the best of them, you can take a look back afterward, in memory or on your scorecard, and find the unexpected play or late at-bat that turned the thing around.


This doesn’t happen with anything like the same regularity in other teams sports, and it’s one of the reasons that baseball offers hope as one of its steady ingredients: balm for your pain; restoration for your foundering, down-on-its-luck team; and that little three-run rally by the good guys in the bottom of the eighth which starts when your No. 7 batter lifts a feeble Roman-candle pop that just falls in behind first base and sends a runner scurrying along into scoring position.

I hope that one day the Baseball Hall of Fame gives Angell a call and asks him to donate his scorecards. [I've since learned that Angell's papers are housed at the Hall; the list of his donated items, including scorecards, is impressive.] Cooperstown ought to showcase the meticulous work of a dedicated baseball watcher like Angell, whose scorecards—if he's kept them—would date back to the late 1920s/early '30s. (Angell's father was a lawyer, and Angell remembers using his father's long yellow legal pads to keep score when he was a kid in the living room, listening intently to some middling New York Giants game on the radio.) Unsurprisingly, Angell has written affectionately and memorably about scorecards and their usefulness—as above—and I've gathered a few of his references over the decades (all, of course, from The New Yorker):


Later on, swarms of second-stringers began to crowd into the lineup, quickly causing my scorecard to resemble a botched arithmetic test, so I cheerfully gave up following the game….

I stuck with the game until the end of the seventh inning, by which time matters stood at 16-12, in favor of the Padres, and my scorecard looked like a volume report from the Chicago commodities market.


O my Mets! I came back to Shea—came back home, really, after a sensible defection of several summers—when they began to win, or almost win, a lot of games in June, mostly on nerve and pitching and some plain luck. I have a private scorecard symbol for an eye hit—two tiny circles under the pencil stroke that indicates a single—and a good many of my Mets scorecards saved from midsummer, I notice, have those beads peeping out from the thickets of some Mets rally.


[My] squidgy, messed-up scorecard looked like a child’s work of art (a valentine, a birthday card)….


Watching [the Red Sox’s] six-run second-inning assault against Doyle Alexander, I at last devised a neat addition to my scorecard symbols—a little

on the left-hand margin of the appropriate box, standing for a ricochet off the green wall....

The smoking 15-14, thirty-two-hit morass looks not better on one’s scorecard, which yields up dripping, sanguinary slices whether read vertically or across….

Watching, you knew that [Aaron] Boone had glimpsed [Juan] Pierre, or the idea of Pierre, whirling past first base, and wanted him stopped there. He’d given up the run—the winning run, as it turned out—because he was afraid of the next one, or a bunch more. Call it a forced mistake. And as I put the play into my scorecard, I circled it, for elegance.

Angell posted his first baseball piece to the New Yorker blog on October 17, 2008 and, with the exception of a magazine recap of the 2009 postseason, all of his baseball commentary now appears on the magazine's blog. (They're archived here.) I don't know whether this turn of events is Angell's idea—he's slowing down, at age 93—or whether the magazine has deliberately moved him off of the printed page, or a combination of both, or other factors about which I'm unaware. Reading his blog posts of the last couple of postseasons is good fun, of course, and they cumulatively round out the playoffs in Angell's pleasing manner—with not a few impulsive musings that might've been edited out of the magazine. Yet I miss the breadth and heft of his longer print pieces. (In the early- and mid-1990s, those long pieces got much shorter under the controversial editorship of Tina Brown, down from his customary 30-plus pages to 10 or so, where they remained.) Perhaps it's too much work for Angell now, and it's more convenient for him to weigh in whenever he feels like it with short pieces on the blog. Is he capitulating to the current cultural shift toward smaller and smaller fields of comprehension, or does he genuinely prefer blogging to long-form writing? Who knows. Whatever keeps him working.

One terrific advantage to blogging if its immediacy, and every baseball fan was treated to something really special on the morning of October 28, 2011, when The New Yorker blog posted Angell's scorecard of the tremendous sixth game of the Cardinals/Rangers World Series, in which the Rangers were twice one strike away from winning the Championship. In one of the greatest World Series games I've ever watched, David Freese tied the score with a miraculous bottom-of-the-ninth triple (with two strikes on him), and then won the game on his next at-bat with a home run in the eleventh. Here's Angell's scorecard of the insanity: 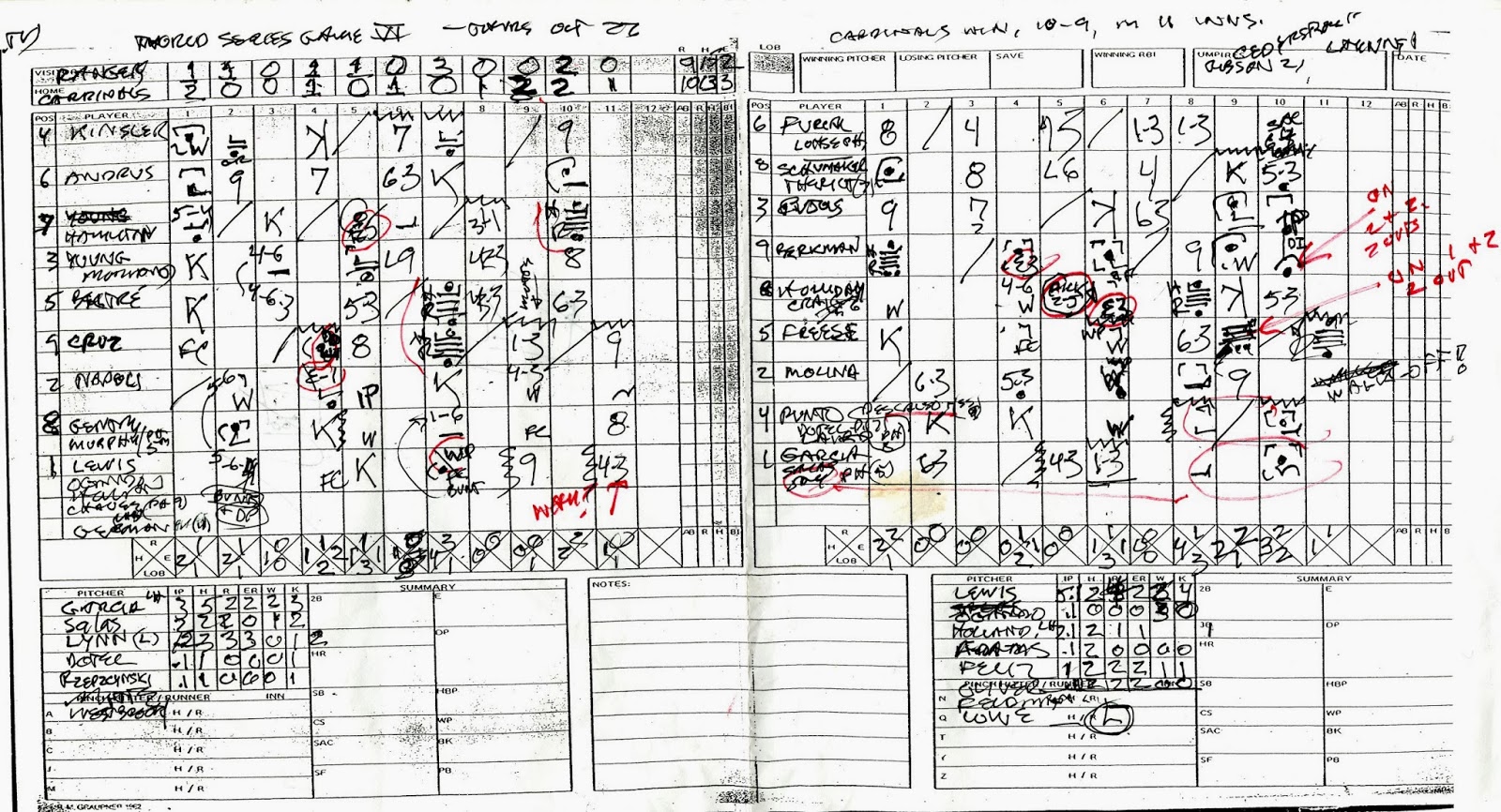 Note his excited, red-inked "On 2 & 2, 2 out" and the all-cap "WALK-OFF!" notes on the right, the chaos of the slashes and circlings and cross-outs. There's something about the energetic, up-to-the-second scribbling that matches the game's urgency and lived-in excitement, the lead changes and tensions, dramatizing how one later can "find the unexpected play or late at-bat that turned the thing around." I'd love to see many more of these parallel stories that over the decades Angell's been telling, in neat orderly rows and in predictable and wildly unpredictable fashion.


Photo of Roger Angell by Elon Green via Nieman Storyboard.
Posted by Joe Bonomo at 1:58 PM