Baseball, The Bicentennial, and 70s America: A Conversation with Dan Epstein 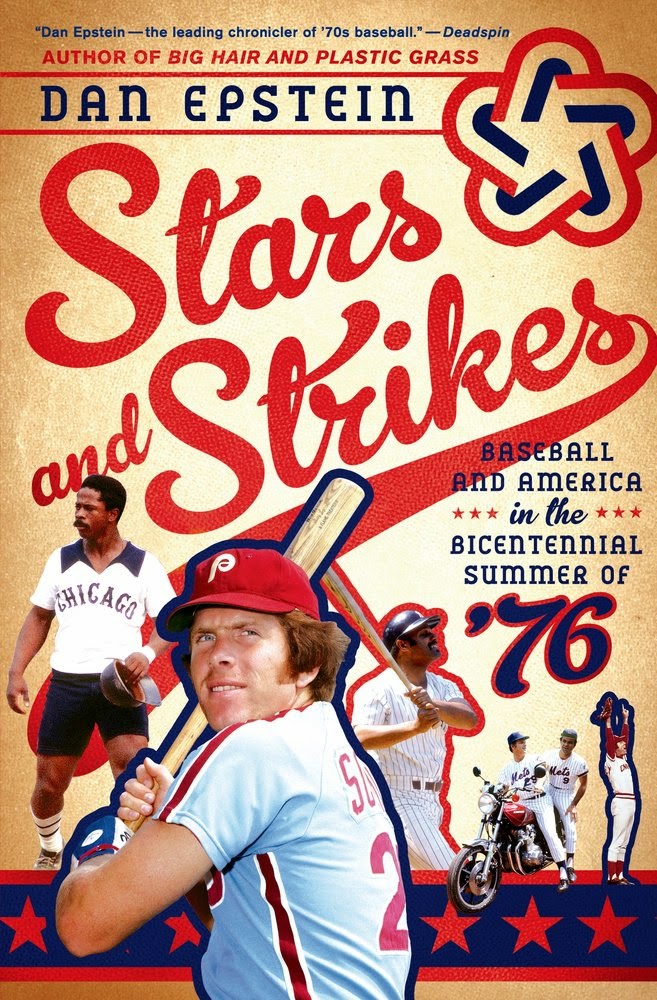 In Dan Epstein's entertaining new book Stars & Strikes: Baseball & America in the Bicentennial Summer of '76, two simultaneous stories unfold: the 1976 season, a tumultuous campaign that ended in a World Series sweep (Reds over Yankees); and the nation's 200th Birthday, an equally noisy, flashy affair. With deep affection for the game and the era, Epstein takes a wide-lens approach, observing the many unlikely instances when the nation's pastime and pop culture crossed paths. Stars & Strikes is meticulously researched, bouncing between recaps of both essential and oddball games of the 1976 season and touchstones of American culture, notably the nationwide Bicentennial celebrations but also the CB craze, Billboard album and single chart sightings, burgeoning music scenes, Hollywood movies, violent urban unrest, the Olympics, and the Presidential Election. The result is a wild, illuminating and very funny book.

Baseball—like any sport, like anything—does not exist in a vacuum, and Epstein, whose previous book Big Hair and Plastic Grass explored baseball against the decade of the 1970s, is especially hip to this. (I interviewed Epstein, along with fellow baseball writer Josh Wilker, here in 2011.) Some of the connections he traces are innocuous—Bill Buckner looks like porn star Harry Reems who happened to be on trial in 1976—and some purely metaphoric, but throughout, Epstein happily enjoys detailing the boisterous, ricocheting figures, events, and trends of sport and culture in the funky mid-70s. If there is a central figure in Stars & Strikes it's Mark "The Bird" Fidrych, the gangly, mop-haired, 22-year-old phenom starting pitcher for the Detroit Tigers whose curious, talking-to-the-ball and mound-tending style of play captured the attention and affections of the Motor City and then the nation. (I vividly remember Fidrych pitching on Monday Night Baseball, the Bird's "coming out party" that Epstein writes about so memorably, and throughout the rest of the '76 season; as a kid I loved his joyful, weird, appealing personality.) As Epstein shows, Fidrych's starlight shined bright, and well beyond the game: he was invited backstage at an Elton John concert (and walked away with a pair of John's boxers, autographed), appeared on television variety shows, was considered for a part in the film version of Grease, and was generally mobbed wherever he went. Fidrych serves as a kind of locus in the book for the meeting of a difficult, slow-paced, occasionally-exciting strategic game with celebrity-obsessed, trend-watching, People magazine-consuming culture. In many ways, the Fidrych phenomena embodied the ethos of 1976, on the field and off.

Epstein has his most fun observing wacky moments: the Houston Astros and Pittsburgh Pirates "rained-in" at the Astrodome when a torrential storm prevented fans from driving to the stadium; California Angels luring designated hitter Tommy Davis away from Casablanca Records (KISS, Donna Summer, et al) where he'd recently been hired thinking that his days playing ball were over; owners Bill Veeck's and Ted Turner's over-the-top ways of promoting their teams to dwindling crowds. Epstein unearths 70s pop trends (mystic pyramid power, TM, etc.), and cites Top 40 pop and R&B hits as a kind of musical score to the long season (each chapter in the book is named after a hit song of the year). But Epstein doesn't shy away from more complex issues: he acknowledges the vexed race relations polluting both MLB clubhouses and city streets, describes Los Angeles Dodger Rick Monday's famous snatching of the American flag from the hands of protesters who tried to ignite it in the Dodgers Stadium outfield, and reminds us that the mind-boggling salaries players enjoy today are the result of hard-fought battles between players and owners that resulted in the revoking of the infamous Reserve Clause, the contractual item that allowed owners to keep players forever, pay them little, and trade them away with impunity. The freedom granted the players via the Basic Agreement in 1976 played out, of course, against the country's long and prideful celebration of its own freedom earned two centuries earlier.