Reading Roger Angell's recent essay "This Old Man," a sobering and melancholy but ultimately cheering account of the writer's own mortality, I childishly pushed aside thoughts about death and other depressing inevitabilities, not the least of which those circling Angell. (He's far braver than I am.) I comforted myself by considering the many goodbye's that Angell has bade to others. He's been writing about baseball for over half a century; during that span many athletes and managers, writers and broadcasters have died. When he or his editors feels that the occasion warrants it, Angell eulogizes. His piece on the passing of Joe DiMaggio in 1999 is among his best in this vein. 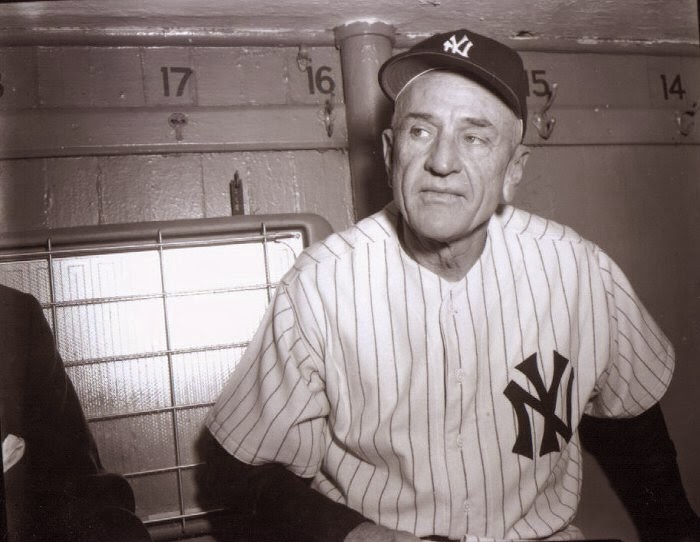 But I'm recalling tributes to a different kind of mortality: the departed baseball manager. Angell knows that a field manager, particularly in a hi-wattage town such as New York, does more than fill out lineup cards, chew over eighth inning strategies, and holler at umpires; he also, perhaps unfairly, comes to represent and embody the hopes of thousands of fans. Managers are dads who often disappoint in their promises; managers themselves toil under a different kind of gloomy patriarchy. In an unsigned (and as-yet-uncollected) "comment" in The Talk Of The Town in the October 29, 1960 issue of The New Yorker, Angell gives an affectionate "so long" to longtime Yankees skipper and local legend Casey Stengel, fresh off his team's seven-game loss to the Pirates in the World Series. With his characteristic blend of knowledge, humor, and affection, and in the grand "We" manner, Angell acknowledges that Stengel's departure "from our town and our summertimes" has left us "saddened and reflective."

Zooming out, he adds, "Among other things, it has made us realize how rarely these days we encounter a public news item that strikes us personally."


Now that this city has become the capital of the world, we have grown habituated to significance, attuned only to the long view; the cry of a siren in the street below us, once the herald of some small neighborhood excitement, now only marks the passage of a statesman speeding toward crisis and the history hooks. Casey was different; we have cared about him as we used to care about our local celebrities—with pride and laughter and a fond recognition of detail. Watching him, memorizing him as we have done—the rubbery, humorous mouth between deep parentheses, the thumbs oddly pointing outward above half-clenched fists, the torso bent forward during the labored walk toward a pitcher in trouble, like that of a mountain climber on a steep trail—we have been increasingly grateful for the sight of a rarely complex man who was sufficiently preoccupied with his trade to develop eccentricities that were wholly unconscious.

Angell gently criticizes New York media for its patronizing tone toward Stengel's "difficulties with the spoken language—his total recall, his addiction to the non-stop sentence, the unattachable pronoun, and the multiple non sequitur." With precise knowledge of the game and with a mastery of describing its nuances, Angell defends Stengel's in-game expertise, so often misunderstood by the outsider. "The manager on his way out to the mound or on the point of selecting a pinch-hitter is a man beset," Angell begins.

He must have total recall, in order to remember not only what this batter or that pitcher did earlier this season but what ten thousand batters and pitchers have done under the same circumstances in the past—right back to, say, a left-handed spitballer for the Toledo Mud Hens in the sixth inning of a doubleheader played in August of 1927. There are also the immediate abstrusities: the state of mind and future usefulness of the pitcher if he is derricked (or left in), the collective muscle tone of the bull-pen staff, the ability of his pinch-batter to hit against the present pitcher and the relief pitcher who may be brought in to face him, the ability of the substitute fielder (who will take the place of the man removed for a pinch-hitter) to handle high flies in left field late in the afternoon, the danger of scrambling the pitching rotation just before an important series in Chicago (where one of the club’s fast-ball pitchers has a girl friend who is apt to keep him up late at night), and the possibility that those clouds beyond the Grand Concourse may roll in and rain out the last few innings before the team can make up a two-run deficit. It was only Casey Stengel’s honest attempt to re-create and recount all these circumstances that led to his verbal misadventures when he was asked, “Why did you yank Duran in the seventh?

This is great stuff—smart, funny, disarmingly (and charmingly) devastating in its defense of Stengel. Angell concludes by wagging his finger at a favorite target, greedy and clueless owners "who would prefer to believe that their field leader is not a manager but a management expert who has been hired simply to administer their personnel." Angell ends the brief tribute with this wonderful, evocative image: "We can think of no more heartening sight for a squad of suggestible, nervous, and incurably superstitious young athletes than that bowlegged father-figure—the tribal juju man, wise in battles—hobbling off the mound after having made his impossible decision, muttering to himself and rotating his fists, and then executing his cabalistic little hopping dance in order to avoid stepping on the foul line." 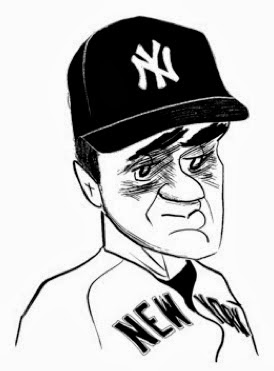 In a comment in The Talk Of The Town nearly four decades later, Angell said goodbye to another cherished, enduring Yankee skipper. Joe Torre left town in 2007 under difficult and unhappy circumstances, and Angell took the opportunity in the November 5th issue to consider Torre's grace and humanity, often battered and bruised during his spectacular eleven-year run as Yankees manager. Angel writes: "Baseball will stick it to you; it means to break your heart, and though old fans do understand that it’s losing, in all its variety, that makes winning so sweet, the departure of Joe Torre is something else altogether. Gone after twelve years at the helm of the Yankees, the longest uninterrupted run since Casey Stengel’s 1949-60 tenure, Torre was victim of a corporate midfield takedown: the decision by the owner, George Steinbrenner, and his nepotic front office not to renew—or not acceptably renew—his contract, after the team’s failure to progress beyond the first round of post-season play in the past three Octobers." Angell marvels at the "attachment and identification" that Torre enthused in his many fans, noting that Torre's "composure and steadiness in hard times became as familiar as his odd, tilting trudge from the dugout to the mound to call in a fresh pitcher. A habitual modesty interwoven with an awareness of the difficult daily grind powerfully secured him to his players."

Disgusted with management, sympathetic to a manager besieged by pressure, Angell ends by describing Torre's graceful way of dealing with the rigors of managing in The Bronx:


The shock of Torre’s departure will not soon go away, but of course we should have known how it would play out. Only the owners, down in Tampa, seemed startled (at times, anyway) by his decision, but if they knew anything about him how could they not have known what would follow? Is it possible that they have no sense of the calamity to the franchise and to the fans and to baseball itself that the departure of Joe Torre from New York represents? He, at last, supplied the touch of class, the Augustan presence, that the Yankees had so insistently proclaimed for themselves and have now thrown away. For Torre, it was still about the players. Meeting the press at the Stadium after the third divisional game, the last victory of his regime, he said, “Every time we go to the post-season, there’s nothing that’s going to satisfy anybody unless you win the World Series. And that’s very difficult. . . . I understand the requirements here, but the players are human beings, and it’s not machinery here. Even though they get paid a lot of money, it’s still blood that runs through their veins.” There was a little more in this tenor and then he brightened: “For a guy that never got to the post-season as a player, I’m having a hell of a lot of fun when you look back on the whole thing.”

Note, beyond avaricious owners and Stengel and Torre's lengths of tenure, what links these two comments over thirty-seven years: the image of a manager and his long walk to and from the mound. It's a journey that Angell has witnessed and considered thousands of times, in meaningless chilly games in March and in engrossing chilly games in October, its narrative embedded in the game's mythology. It's just a man at work: Stengel in the team's mid-century glory years, Torre in its late-century rebirth. To Angell that work, and that walk, tells a far greater and enduring story than of a strategy session, pep talk, or pitching change, it tells the story of a team and its young and old fans, of everyone's need to fasten on to someone, in good times and bad. So long.


Top photo via The New Yorker.