Filling in a Story with a Song 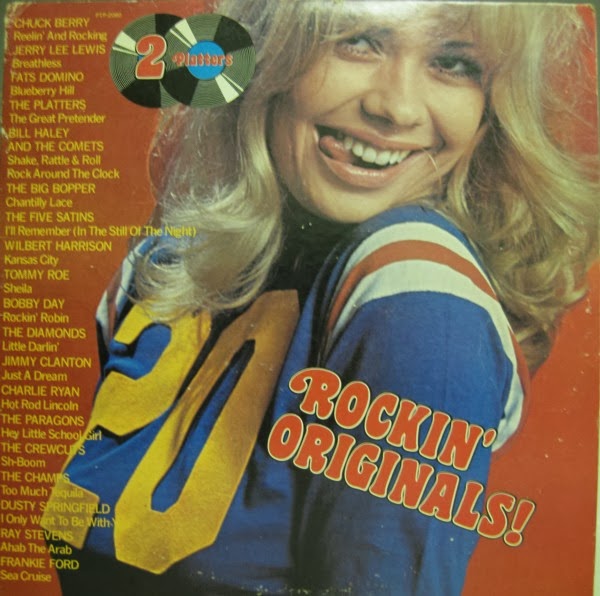 I usually respond to music first, lyrics second. I've always loved a good rock and roll instrumental, but even an instro's got to have a name. The first memory I have of drawing a line—or having the line drawn for me—between an instrumental and its title is listening to The Champs' 1960 song "Too Much Tequila" when I was a kid. I discovered the tune on 20 Rockin' Originals, one of many low-budget compilation albums released on the Pickwick label. (This is the album where my long education into Jerry Lee Lewis began, as well.) My family owned the record and I'd spin it in the rec room, loving "Too Much Tequila's mid-tempo Latin groove and somehow connecting its end-of-the-night vibe with the hangover implied by the song's title. I didn't really know what a hangover was but I sure knew "Tequila," the frantic song to which "Too Much Tequila" was a follow-up single—and, well, I got the joke. Tequila: giddy, shake-your-hips happiness. Too much tequila: misery fighting with a wan grin to keep the party going. I didn't know such language when I was a kid, of course, let alone the dissolution behind over imbibing, and 1960 sure seemed a long way in the past to me. But I smiled at the connection the song made between its headache-y shuffle and the sorry acknowledgement of its title. It was a good early education in the power of evocation.

Since then, I've enjoyed the instrumental that narrates a story as its music and title come together. Here's a recent cut, "Pigtails and Kneesocks" written by guitarist Eric Stein of the great Greenhornes. It's from their 2002 album Dual Mono. There's a blacktop story in these 12 bars somewhere, its blend of sex and innocence unsettling. But it's told, or remembered, from whose point of view? The girl's? The boy's? The grown woman's? The adult male's? Are we on the playground, or are we somewhere decades later, cursed by nostalgia? The beauty of an instrumental is that the spaces inside of it are so vast that they can evoke a number of stories at once. This might be a deeply personal song, or it might be fantasy. Or it might be that the images the song produces matter to me because they're filtered through my own memories of recesses at Saint Andrew's, of girls in uniforms flying on swings. And what about those ethereally howling backing vocals, what stories do they tell? Anyway, it rocks.

Another favorite is "Seka's Wedding," a haunting song from Charlie Pickett's 1986 album, Route 33. By the time I first heard this cut, I was considerably more worldlywise than I was when I puzzled over "Too Much Tequila," half getting the gag. I sure knew who the porn star Seka was, and that news of her nuptials produced this disconsolate, sighing ode is very funny. "Seka's Wedding" is nothing less than a recording of disappointment, echoing around in self-consciousness and awkwardness. Imagine the heartbreaks around the world, now that Seka's betrothing herself to only one dude. She's already semi-retired, and now she's getting hitched? Hang on to those VHS tapes, guys; an era's over....

Email ThisBlogThis!Share to TwitterShare to FacebookShare to Pinterest
Labels: charlie pickett, instrumentals, rock and roll, songs, the champs, the greenhornes

Thanks for the correction!