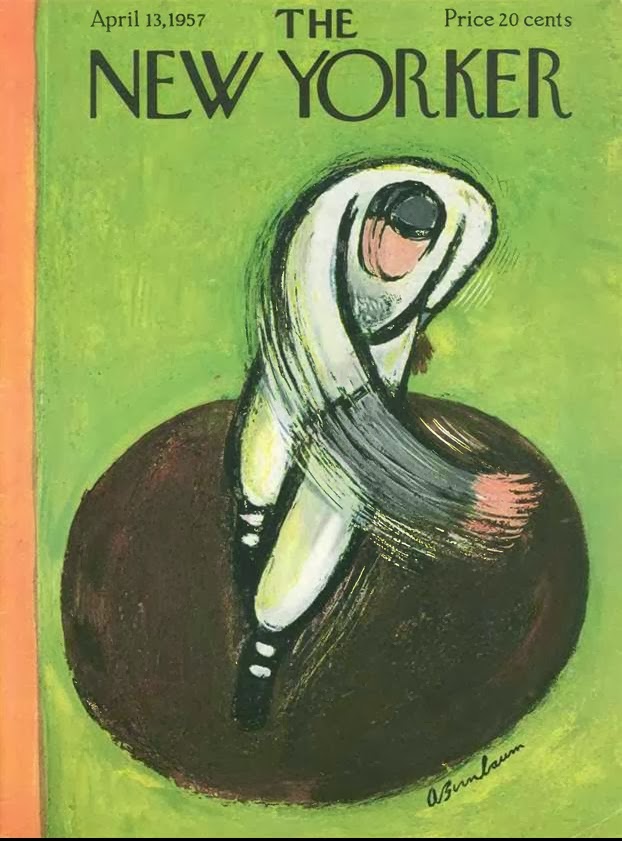 Roger Angell had been on the staff of The New Yorker for nearly two decades by the time he filed his first Spring Training report in 1962, which essentially launched his career as a baseball writer. His first piece appeared in the magazine in 1944; he was named Fiction Editor in 1956. Throughout the 1940s and 1950s he wrote and published many short stories, as well as film and book reviews and the occasional "comment" in the Talk Of The Town section at the front of each issue. Two of his baseball-related comments exhibit Angell's knack for the puff piece, winsome prose he'd occasionally turn to in his baseball writing over the decades, usually in the form of self-standing segments within his longer, more ruminative essays.

For kicks, I've rounded them up, along with their accompanying illustrations (the artist who created them remains a mystery to me, unfortunately). From the September 30, 1950 issue:

We went to the Polo Grounds on a sparkling day last week and found ourself witness to a ballplayer's "day." It took us a few minutes to find the athlete being honored—a pitcher—but we finally spotted him in the crowd around home plate, uncomfortably surrounded by aldermen, Legion caps, Masonic watch fobs, and a fife-and-drum corps, all from his home town. There were a good eight or ten speeches before the pitcher was permitted to accept a check, wristwatch, radio, and a travelling kit, and all through the ceremonies, a fan near us kept shouting, "Where's the car? where's his Buick, ya cheap skates?" After the delegates had straggled back into the stands, the pitcher warmed up and was socked for four runs in the first inning. He was eventually removed for a pinch-hitter. We found the proceedings rather embarrassing, with all the marks of an unsuccessful birthday party for a six-year-old. There was the same Participation by Superfluous Elders, the same Odious Comparisons of Gifts (by the noisy fan), the same Crackup of the Birthday Boy Under Pressure. If we are going to continue to have "days" for ballplayers, let's have the ceremonies after the game is over, or maybe after the season is over.

Angell didn't write this next comment, but it sets up his piece published the following week. From the May 4, 1957 issue:

In anticipation of the start of what is called the Silly Season, the women's page of the World-Telegram & Sun carried a big feature on baseball recently, for the announced purpose of initiating women into the mysteries of the game. We guess we had better warn the ladies not to expect any help from The New Yorker's advertising columns. We ran an ad a couple of weeks ago for Schaefer Beer (which sponsors the Dodgers) that showed a young lady and her escort at a ballpark, each clutching a cup of the brew. In the girl's other hand, there was a filled-in score card, and you never saw a sillier piece of work. According to her card, the Dodgers sent only their pitcher to the plate in the third inning, and in the fourth they gave up their turn at bat with two our and a man on second.

Here's the terrific Schaefer Beer ad in question, from the April 13 issue. She's flirting, it looks like. I don't think she cares too much about this particular game. And maybe she's holding his score card. Incidentally, this issue also featured the great cover from Art Birnbaum at the top of this post. 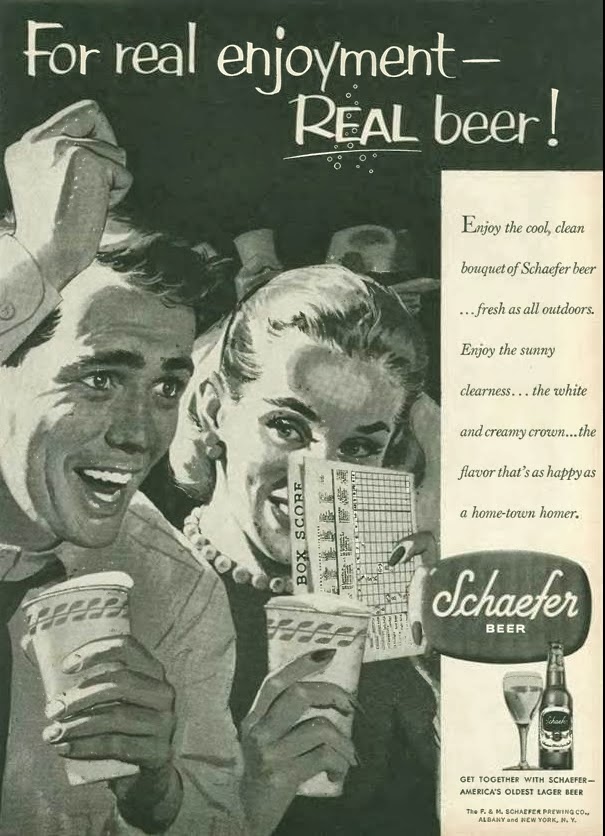 Don't advertising men know anything about baseball? Evidently not. Last week, we took the trouble to point out some hideous mistakes on a filled-in baseball score card that had appeared in a Schaefer Beer ad in this magazine. Then our attention was drawn to The New Yorker for April 27th, which contained two advertisements incorporating such hilariously improbable baseball scenes as to lead us to believe that the copywriters responsible are either Englishmen or elderly Wellesley alumnae. Each of the ads involved at least one clear violation of the rules of the game. One of the strange little scenes shows a rookie player (who, by the ungainly looks of him, is now back in the Nebraska State League) lighting up a filter cigarette for an umpire on the playing field. In the accompanying dialogue, the umpire says, "Say, good smoke. Darn good taste. But...uh, son...don't you know cigarettes aren't allowed on the playing field? Shag those Parliaments—and put 'em in my locker!" Violation! Rule 9.00 in the "notes" section of the "Official Baseball Rules" states that "Umpires, on the field, should not indulge in conversation with players." It happens that there is no rule stating that cigarettes are not allowed on the playing field. Nor is there a rule against player's being invited by umpires to place small gifts in their lockers, but we'll wager that the Commissioner of Baseball would be interested to hear of such an invitation.
The second ad shows a trim, bearded young Sikh, clad in a turban and a pink Excello shirt, and spotting a bracelet and a large sapphire ring, who is standing on the playing field and apparently signing an autograph book for a member of the visiting team. Double violation! Rule 3.09: "Players in uniform shall not address nor mingle with spectators...before, during, or after a game." Rule 3.15: "No person shall be allowed on the playing field during a game except players and coaches in uniform, managers, news photographers, authorized by the home team, umpires, officers of the law in uniform, and watchmen or other employees of the home club." Rules or no rules, the identity of this mysterious Indian fascinates us. (The advertising copy doesn't mention him once.) Having dismissed the unlikely possibility that he is a new colorfully costumed watchman for the home team or a photographer for the New Delhi Tribune, we think we have come up with the only logical answer. He must be a new player—a pitcher, from his build—who has been unearthed by a scout for a second-division club and is being photographed in the act of signing a contract. We have named him Dizzy Singh, and we advise Birdie Tebbetts to keep a sharp eye out for Dizzy's betelnut spitter.

The ads in question: 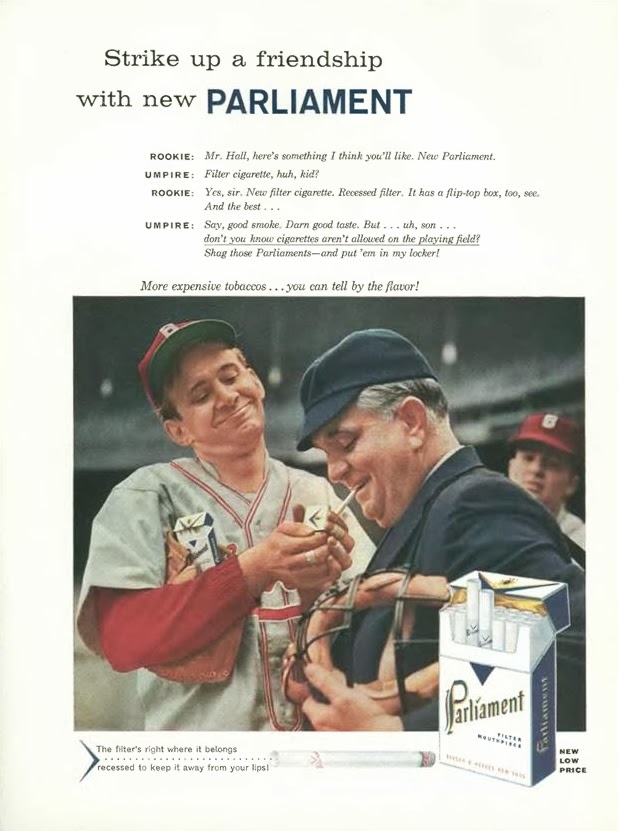 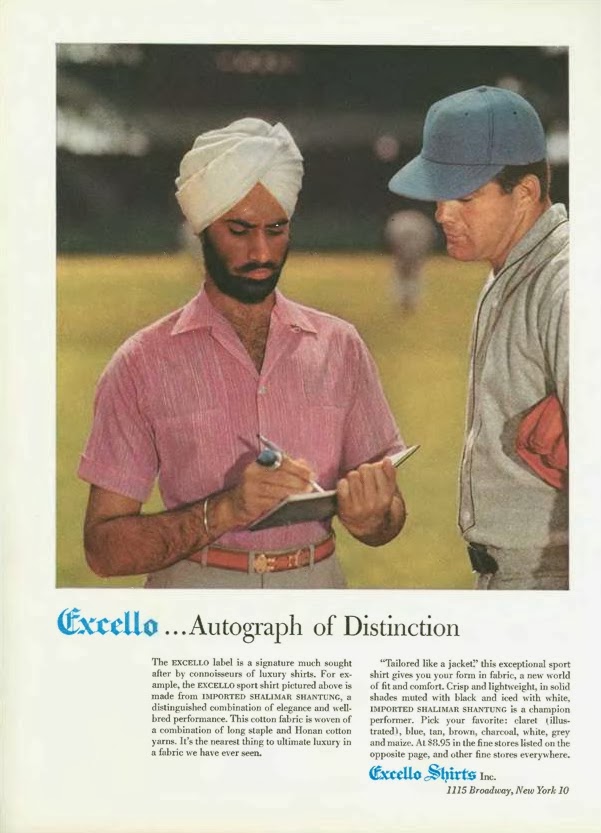 These comments are breezy, inconsequential, and a bit corny—not to mention mildly politically incorrect. In the "Talk Of The Town" style, they're written in the (now-defunct) anonymous first-person plural, congenial hors d'œuvre to get you to the meatier politics, arts, and culture. As such, they're middling pieces in the Angell cannon; he hasn't bothered gathering them between covers. But that doesn't detract from their small and nostalgic pleasures.
Posted by Joe Bonomo at 10:35 AM

I had a little too much free time on my hands, so I tracked down the September 1950 game Angell attended at the Polo Grounds. It was the 9/17 game against the Cardinals, and the Giants starter (and honoree) was Sal Maglie.