I recently watched a documentary on MLB Network about the tumultuous 1977 baseball season, one my favorite campaigns. Inspired, I turned to the fantastic MLB Classics and now-defunct
ClassicsMLB11 channels on YouTube. On the latter I found several full (likely unauthorized) This Week In Baseball episodes that brought me back to many air-conditioned Saturday afternoons of my youth when I'd catch up on the week's shenanigans, heroics, and pratfalls via Mel Allen's good-natured narration and comic theme and incidental music that said, All's right with the world, baseball's being played and school won't start again for years.

I also watched and savored in its entirety the legendary Game Six of the 1977 World Series when Reggie Jackson smacked three home runs on three consecutive pitches against three different hurlers. The feat inspired Howard Cosell to some pretty laughable, lovable heights of rhetoric, and the memory of the game is embedded in me; I jumped up and down with my brothers and dad in our rec room when Reggie knocked his third homer into the scarily black bleachers of Yankee Stadium. What I watched especially closely this time around was the game's conclusion, because I wanted to witness again in real time the madness of a Championship-clinching game as celebrated in The Bronx in the late 1970s. Among the complaints leveled against baseball during this era was the increasing drunken unruliness of fans and the sport's inability or unwillingness to guard against their recklessness. Though I remember the night clearly, it seems remarkable to me now that such on-field chaos was allowed to occur with abandon, so dulled are we now to the battalions of somber cops and their enormous horses ringing an outfield pre-festivity, prepared to halt any and all unrest. The image of Reggie, futilely holding his helmet out in front of him as a shield, darting from right field toward the dugout like a halfback with time ticking away, is remarkable, and prehistoric.

Inspired by Roger Angell's astonished, "frame by frame" recap of Yankee Chris Chambliss's pennant-clinching home run of a year earlier, and the mayhem it subsequently set off, I grabbed a few images of a petrified Reggie dashing for safety, heartily laying out a couple fans along the way. The number one hit on Billboard the week of October 18, 1977 was Debby Boone's "You Light Up My Life." For spit-take inducing contrast, hum along to Boone as Mr. October runs for his life. Reggie might've been thinking, rollin' at sea, adrift on the water, could it be finally I'm turning for home, but in far saltier and more panicked terms. 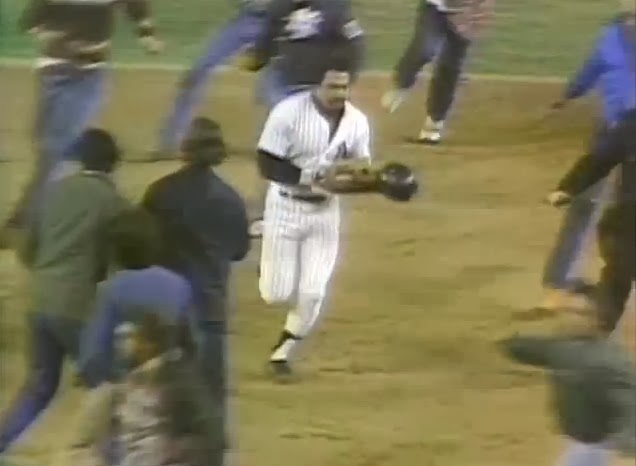 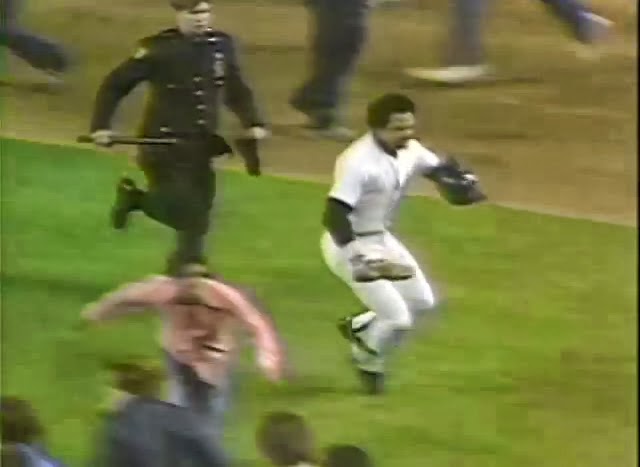 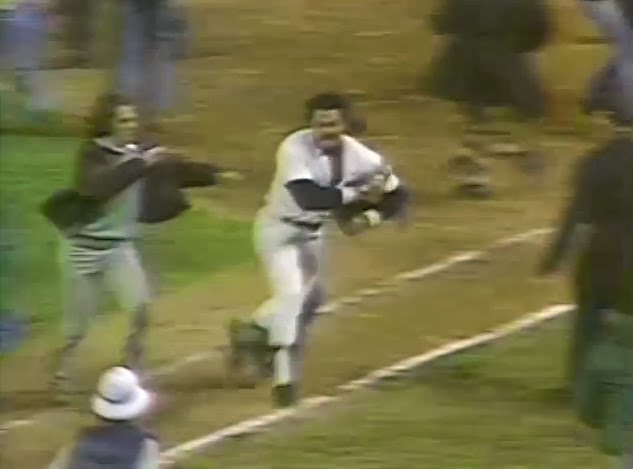 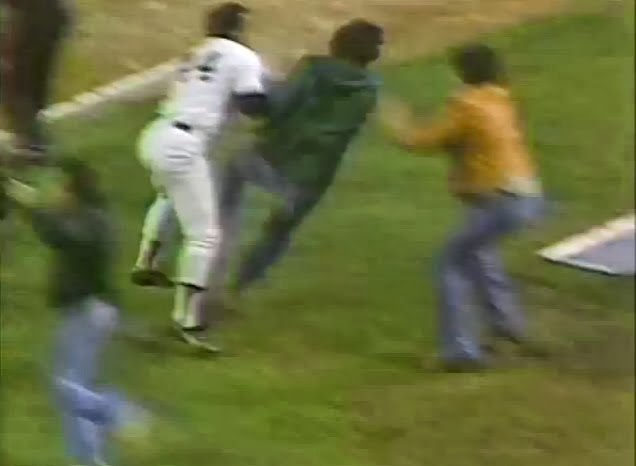 For a more appropriate soundtrack, here are the Dead Boys at CBGB, filmed the same month the Yankees won the Series. Their debut Young Loud And Snotty had just been released on Sire. "Don't touch me tonight I'm a high tension wire." That's more like it.

pure awesomeness, as ever.