A nice find today via Open Culture, Jack Kerouac's hand-drawn maps of his and Neal Cassady's hitchhiking trip from July to October in 1948. As I'd speculated—and hoped!—here, it seems as if Kerouac and Cassady sped right through DeKalb on the Lincoln Highway. 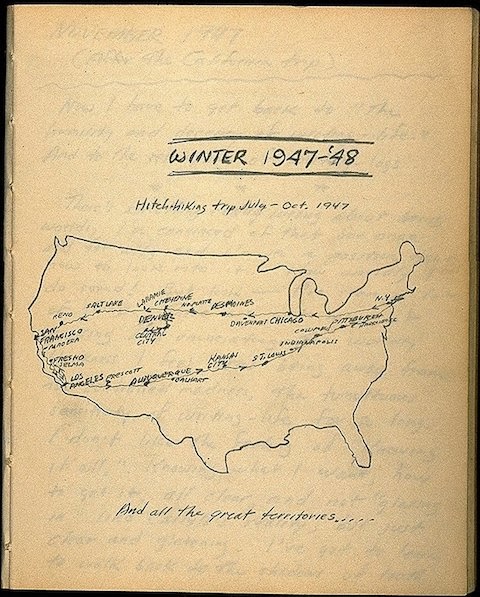 
Surely most ardent readers of Jack Kerouac’s novel On the Road have tried to map Sal Paradise and Dean Moriarty’s American journey. Above, partially alleviating your own need to take the pains of sketching out that great Beat journey yourself, we have a map drawn by the author himself. Pulled from Kerouac’s diary, it traces the route of a hitchhiking trip of July through October 1948, which no doubt fueled the still-potent literary impact of his best-known book, which would see publication almost a decade later in 1947. Each stop has a label, from the iconic  American metropolises of New York City, Chicago, San Francisco, Los Angeles, and Washington, D.C. to the less-known but no less evocative  smaller towns like Des Moines, North Platte, Laramie, and Selma.

Marshall links to other sites with other On the Road maps, including one post with images of the automobiles Kerouac and Cassady caroused in. Here's the '49 Hudson: 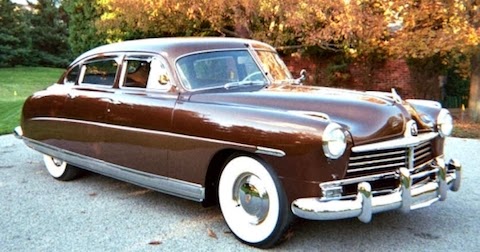 This is truly great to read! Walking down Lincoln,a freshman just having read On The Road, I often day dreamed about the possibility of Kerouac, Cassady and perhaps even Ginsberg ripping down a younger DeKalb. I've heard rumors of Ginsberg having read on campus in the 80's? Its interesting, no matter how long my past's heroes have been sitting on a shelf, I can't help but feel excitement towards news that may connect them closer to my own life. It makes the mental images I have of them seem more "real".