The Origins of Super Rock 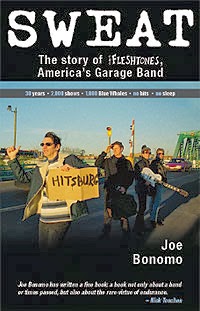 Fleshtones drummer Bill Milhizer once defined his band's patented Super Rock as "taking the best, most exciting elements of rock and roll, and exaggerating and amplifying them beyond proportion, with no apology whatsoever." Crucial ingredients in that wacky stew are cover songs. One of the great pleasures I experienced while writing Sweat: The Story of the Fleshtones, America's Garage Band was compiling the list of songs that the Fleshtones have covered since forming in 1976. (The list is featured as one of the appendixes at the back Sweat.) One of the ways I attempted to understand what made the Fleshtones tick was by identifying the diverse musical and inspirational currents that they've plugged themselves into over the decades. Avid vinyl fans and collectors, the guys in the Fleshtones—especially Peter Zaremba and Keith Streng, and earlier on sax player Gordon Spaeth and his brother Brian—have always turned to obscure singles, scratchy b-sides, and deep album cuts to find songs to cover and reasons to live.

Naming and finding these tunes, plenty of which I hadn't heard, was a tremendous and joyous education for me as I researched the book. The band adds to the list every other month, it seems. Here are some of my favorite songs that the Fleshtones have covered, in no particular order:

Email ThisBlogThis!Share to TwitterShare to FacebookShare to Pinterest
Labels: covers, rock and roll, sweat: the story of the fleshtones america's garage band, the fleshtones

that index was one of my favorite parts of your book.

I've always liked bands that root out great covers (Detroit Cobras, Rubinoos, Joan Jett)and used to "Give a Little Hand" to my friends in the Untamed Youth via mix tapes I shared with Derek, uh Deke. Boy, that was a long time ago....

UY cover Some Kinda Fun! That come from you? ;-)

no Joe, that was a little before my time.

Cool story: My grandpa was a music hound (gee where did I get it?) and got old singles from jukeboxes. When he passed away I inherited them. Among them was Dave York's "Beach Party." I taped it for Deke and it ended up on one of their records.

Love the pedigree on that Boys in the Band record: Leiber, Stoller and Feldman?!? The Phynx?!?!

Yeah, I've never seen The Phynx but it's right up the guys' alley. Ha.