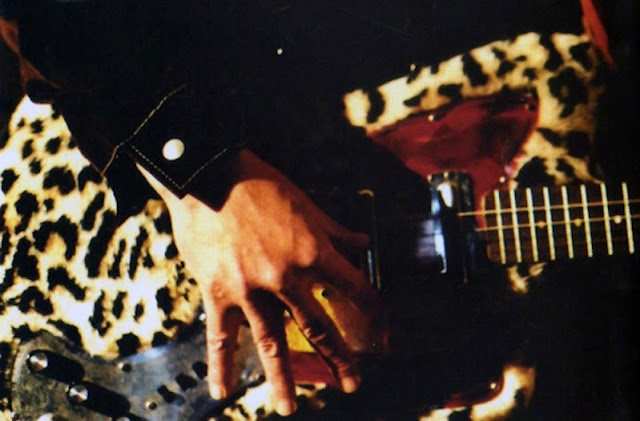 Regrettably, I've seen the great Bodeco only once, in 1993 at Stache's on High Street in Columbus, Ohio. The band was late getting to the stage because when their gig time arrived they were eating at a cheap Chinese restaurant up the street; someone from the club had to go fetch them. After they paid their bill and wiped their mouths, they hit the stage and tore it up: I didn't know who Bodeco was, and that show is still one of my favorites. What I learned later: the band—the line-up that night was Ricky Feather, Brian Burkett, Wink O'Bannon, Jimmy Brown, and Gary Stillwell—hails from Louisville, Kentucky, and their name derives from "Bo" of Diddley and "'deco" of Zydeco. And that's all you really need to know. Bodeco plays muscular, gut-bucket, funky, 12-bar rock and roll, greasy, honest, and fiercely propulsive, led by guitarist and singer "Shaggy" Feather, who growled into the mike at Staches that night like he was pissed off but determined to have a blast. The groove Bodeco lays down is insistent and raw, but loose and swinging. That night in Columbus I picked up the album they were supporting (1992's terrific Bone, Hair and Hide) and since then I've snatched up everything. There are many bands who lock in to a rootsy, retro, lo-fi sound and mine it for all it's worth. Bodeco is great because their songs (about half of which are instrumentals) and ensemble arrangements—including Latin-flavored bongos and shakers as well as over-driven blooze and rawk guitars—are so guileless and timeless and invested in age-old rock and roll values that kitsch and retro stylings are beside the point. Bodeco plays the real thing as passed down from blues to rockabilly to Link Wray to the Swamp to Bo to the Meters and back, leading with spirit and affection and fun. They're playing out and about still, mostly in the south.

Whenever I need to press re-set, I reach for Bodeco. It's probably a good thing that the band hasn't released many albums. Their slim but pulsing oeuvre hasn't overstayed its welcome, indulging eternally in a Platonic, bad-ass, trance-inducing groove.

Here are some faves. Pour a Wild Turkey and turn it up.

These guys look good, I'll be checking them out. I was going to tell you about Go To Blazes, but I saw them on your YouTube page. Great band!

These guys look good, thanks for the tip, Joe. Go To Blazes does the same for me.