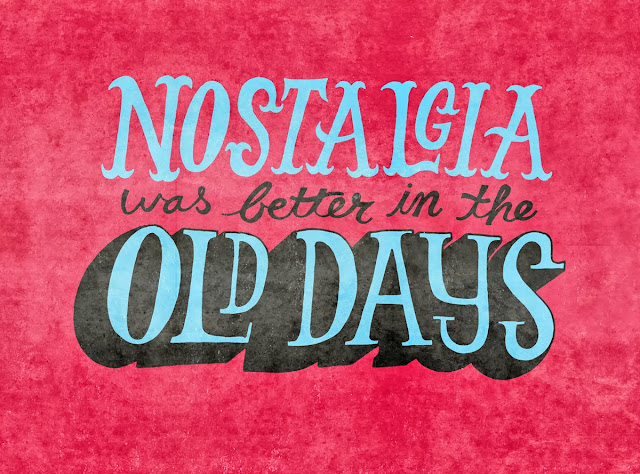 Julie Beck, in her July write-up at The Atlantic covering new books about nostalgia, cites an interesting dilemma in the pre-20th century "treatment" of nostalgia. In discussing the various ways medical professionals dealt with longing for the past, she writes, "How to treat this primordial sludge of symptoms depends on the situation and, I guess, your perspective. For a little boy who missed his wet nurse, doctors brought her back and then slowly conditioned him to spend time away from her. The soldiers sometimes were treated with less patience. French doctor Jourdan Le Cointe thought nostalgia should be treated by 'inciting pain and terror,' as Svetlana Boym describes in her book The Future of Nostalgia."


Le Cointe cited the example of the Russian army's outbreak of nostalgia in 1733, on its way to Germany. The general told the troops that the first one to come down the nostalgic virus would be buried alive, and actually made good on his threat a couple times, which nipped that right in the bud.

When nostalgia finally made its way to the United States, after the Civil War, the "scare it out of them" tactic was replaced with "shame it out of them."  American military doctor Theodore Calhoun thought nostalgia was something to be ashamed of, that those who suffered from it were unmanly, idle and weak-willed. He proposed curing it with a healthy dose of public ridicule and bullying. Maybe this is why most people don't feel nostalgic about middle school.

Other dubious cures tried over the years include leeches, purging the stomach, and "warm hypnotic emulsions," whatever that unspeakable horror might be. Doctors did sometimes go with the obvious solution of just letting the patients go home, which more often than not cleared their symptoms right up. But even that wasn't guaranteed to work, if the home they longed for had changed significantly or just no longer existed.

This last development is the most interesting to me. Consider the logic: a patient suffers from nostalgia—a disease coined by Swiss physician Johannes Hofer in the 17th-century from the Greek nostos, for homecoming, and algos, for pain— and that patient is sent home to visit what he yearns for. The "what" in this case is really the "where," but it all might have changed irrevocably. Treatment then fails.

When is the past ever the same? When is "back there" ever the way it was? Nostalgia is less a yearning for a place or time or person than a kind of distracted grief, an acknowledgement of loss dressed up as a wistful sigh. The ludicrousness of myopic nostalgia-treatment aside, this particular misunderstanding of nostalgia's slippery nature is poignant. It's interesting to note how human attitudes evolve relative to permanent states of the human condition. The litany Beck cites of inhumane if well-intentioned responses to nostalgia underscores the fact that until relatively recently humans have been fighting nostalgia —that is, considering it a hostile force to be eradicated, destroyed as a bacterial virus might be. Yet, nostalgia is in our DNA—you might as well treat hunger by starvation, or sleeplessness by staying up all night. To be alive is to be nostalgic. To argue, as some other-century doctors quaintly did, that one can "cure" nostalgia by going back is foolish, and understandable. How many times we chase the cure before we realize that going back—to a place, a relationship, a time in life—is a placebo.


Illustration by Chris Piascik, via ChrisPiascik.com
Posted by Joe Bonomo at 8:52 AM

Email ThisBlogThis!Share to TwitterShare to FacebookShare to Pinterest
Labels: julie beck, memory, nostalgia, the atlantic, the past