"The piano as battlefield": Alain Feydri on Lost & Found 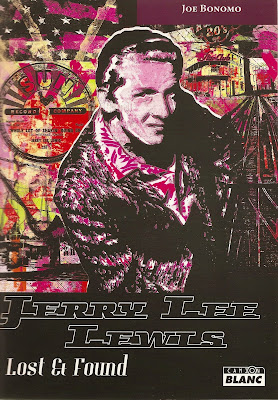 French music journalist Alain Feydri recently reviewed Jerry Lee Lewis: Lost and Found in the fanzine Dig It!. I asked Janique Jouin, who heroically translated Sweat into French, if she would translate Feydri's review into English. She generously obliged, admitting that she works best moving from English to French, and suggesting that I "English up" the translation. Modesty and respect for Feydri forbid me, and besides, I like Jouin's attempt, which she graciously allowed me to publish here. It captures something essential, I'm guessing, about Feydri's style. I'm grateful for his kind and effusive words:

Once you close this book, you can be grateful to Bonomo for not having spared the iconic Jerry Lee Lewis, for having avoided being hypnotized by the myth, and having most of the time stuck to this minefield of a discography which is the great untamed one. We're far from absolute rejoicing. Joe Bonomo, who we already have to thank for this amazing Fleshtones’ biography, has refrained from entering in there as you enter the Holy Land, as a contrite devout, with one’s hands together, blank-eyed and gape-mouthed. Ready to swallow anything. It’s almost the exact opposite. He doesn’t keep his opinions and biases for himself. So, of course, it’s a little bit about the hero's fingers magnetized by the booze, his drinking sprees, and pills swallowed by the box. About the fire, too, that burned his groin, nest of so many sins, just before Homeric rages and slaps given out at will. Bluntly. When God himself can hardly call him to order. It’s about his wedding with his young cousin Myra, too, the source of so much trouble. No serious book about Jerry Lee Lewis could avoid this. But the most important thing is somewhere else, based on the music and by someone who proclaims his belonging to others tribes: punk-rock, garage-rock, indie-rock! Who can praise "Shake Some Action" and evoke Charlie Pickett, the New Bomb Turks and whoever! He’s just like us! We like the way he tells it, explains it in great detail, leaves Jerry Lee behind, and finds him again a few sentences later. Tracking him passionately. The intact emotion inspired by this music crosses the pages, this unique excitement he describes with the right words, the paragraphs crashing into each others like a train crashing into the terminus platform. A book whose backbone remains Live at the Star-Club in Hamburg, a great record, with no air pocket that, literally, pulverizes you. As if there, far away from home, the Killer had had set the turbines of Hell into motion. The Piano as a battlefield. And even if some of us already know it, nobody so far has made a better effort than Bonomo, to say it again so beautifully! With his personal credo, saving Lewis’ Sun era, then telling about the late 60’s country records, on Smash. Tirelessly separating the wheat from the chaff, never taken in by the thickness of the character. Which requires a real discernment, considering all the records the high voltage Louisiana man has cut. A passionate, obstinate book, proudly rooted in a true point of view. Which makes it look like his unruly subject. Portrait of the artist as a mad dog!