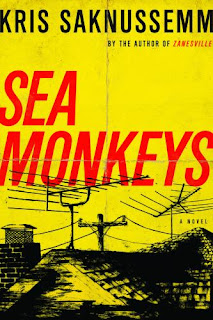 Kris Saknussemm's Sea Monkeys—he calls it a Memory Book; some editions (see image at the left) bear the words "A Novel"—presents a dilemma: throughout the book Saknussemm's writing is vivid, lyric, and urgent, but things go a bit slack as the Saknussemm persona enters and proceeds through his twenties. In short, Saknussemm gets annoying, having evolved into a drug-abusing, serial-womanizing, self-absorbed guy. None of this behavior precludes a good narrative, of course, but as Saknussemm turns inward, his gaze on the world narrows, his curiosity is sacrificed to blackouts or idle-brained epiphanies, and his observations become insular and pinched. Some of this has to do with the diminishing returns of self-destructive, obsessive behavior—but I'm bothered most by the fact that adulthood might be less interesting than adolescence as subject in memoir.

Is this fair? I've certainly read many, many good works of fiction and autobiography that dwell in and on adulthood, but the presentiment, native curiosity, and struggle to match language to action that marks childhood are gears that move more urgently and dramatically than those that power the engine of The Grown Up (this grown up included). When Saknussemm stands on the edge of adulthood, trying to understand his alcoholic preacher father, his unhappy mother, his confounding but loving sister, his friends, the odd and captivating northern California landscape, strange adults, weird classmates, weirder teachers, and, perhaps most profoundly, an incident when an older boy raped him, his writing is at its strongest and his book's searching energy is at its most humming, precisely because in childhood we are searching all of the time, often without being aware, often internally.

The book's last third recounts Saknussemm's reckless alcohol and drug abuse and his rather self-satisfied sexual conquests of his students, his friends, his friends' friends. Some of these liaisons are written about tenderly and with perspective; others are tossed off like snippets from Penthouse letters. Cheers, I'm all for the guy getting laid, but the litany of sexualized women becomes dull, as any obsession or addiction becomes dull, finally. (To wit: the second volume of Peter Guralnick's biography of Elvis Presley.) As a child, Saknussemm, like most of us, found little room for smugness—he was too busy trying to make sense, not avoiding it. He was too busy navigating through the unknowable and the new, not the routine or self-obliterating.

OK, so it's my problem, really. I'm just the reader, whose wheelhouse happens to be the mysteries of childhood.

The book's final essay-chapter is fantastic, Saknussemm at his best. Here, he recalls a crazy adolescent stunt (which may or may not have happened; some of the pieces in Sea Monkeys were originally published as fiction), when he, after Neddy in John Cheever's "The Swimmer," attempts with his friends to cross his neighborhood via only rooftops. Look at this wonderful straddling of childhood bravura, imagination, and nerve with the adult's blinking wondering on the meaning of it all:


Once, long ago, they told us in school there was a time when a squirrel could cross an entire state without ever touching the ground. But they didn’t tell us that California foothills that had been golden for centuries would suddenly lose their live oaks and hawks to brick- veneer houses sprouting silver antennae that shone in the sun. Those houses filled the entire valley in less than two years and made us think even more intently about the squirrels of the not-so-distant past.
Then one night, when the moon was full and there were no good television shows on, the idea came to me—like a magical cure. Like the night I taught myself how to ride a bike.
Maybe we could turn the houses back into golden grass and trees, if we traveled the twenty-two miles of the valley without ever touching the ground—leaping over the shingles and ceramic tiles of all those roofs—at night when no one was watching and we were supposed to be in bed. We could reclaim the roofs. All of them. If we started from Noel’s house, in the newer subdivision, we stood a chance.There were three of us in on the expedition—Noel, Kim and me. Kim thought we should tell the newspapers or the Guinness Book of World Records, but Noel and I wanted to keep the journey a secret. We wanted to leave while the moon was bright. We wanted to leap between the black-windowed houses with the dogs barking and the water gleaming in the swimming pools.
It was harder work than we thought. Kim was fat and sometimes almost fell. We heard sirens and got scared, but the air was sweet and biting with the scent of distant alfalfa and freshly watered lawns. We could hear the steady whoosh of the trucks on the interstate as we always could back in our beds, but the sound was more acute and resonant in the open air and made us wonder harder than ever where they all were going.
We kicked sun-dried, pulpy newspapers out of rain gutters, we whistled down chimneys, we broke off a TV aerial and carried it like a standard, then chucked it like a javelin into an empty doghouse. We were simultaneously explorers and burglars-two very great things to be at least once in life, and no one in the world knew where we were or why we’d gone.
We learned an important lesson that night. We found out you can hide behind a chimney while a dachshund barks its head off only so long before you realize it’s a dachshund. You can cross a hundred roofs but you will never experience that delicious life-mad fear the same way again. You will never whisper as you whispered that first time, or feel so intimately concerned with the fine fur on a cat’s back, seen in the sudden illumination of a flashlight held in a frightened homeowner's hand.
Twenty-two miles is a hell of a long way, and no, we didn’t make it all the way, by any stretch of even our imaginations. But did we return home? That’s my question. Home is a mysterious place—seemingly the same but forever changed, when you’ve traveled as far as we did that night. So many years later, and I’ve lived a hundred lifetimes’ worth of nights beneath that moon. I’ve scaled derelict oil tanks on a beach in North Africa, and fallen off a camel drunk in the heart of Australia, only to be awakened by wild horses splashing on a red-rock creek. Still I don’t know if I found my way back home that morning or if I just reached a jumping-off place. Jump with me, go higher and higher.
I suppose the truth is, we leap from house to house, and inevitably sometimes we stay too long. We grow afraid. The distance seems too great. Eventually we forget how we arrived—we’re so busy remaining.
If you ever get that way, my recommendation is to go up on the nearest roof. That’s Where the adventures begin. Have an expedition party-I may even join you. But We must leave immediately, because We have many roofs to cross and darknesses to leap before We learn the secret of returning.