I've been on a Roger Angell bender of late, as previous posts have made clear. Along the way I've written about Angell's marvelous ability to "turn the game slightly" (after Wallace Steven's definition of metaphor) and to see baseball in large ways; what I've neglected to celebrate are Angell's narrative gifts. For decades he's been a fiction editor at The New Yorker, and in his best baseball essays he brings to bear a fiction writer's eyes and ears for sensuality, mood, significant gestures, physical description, and telling narrative details—this week my favorites are his 1996 descriptions of Joe Torre: his "rumpled face" and his "prairie mortician's gait and glumness when he headed for the mound to remove a pitcher." Angell's storytelling gifts are are pleasingly on display in "Streakers" from the November 29, 1982 issue of The New Yorker, one of his annual season recaps. (He excerpted the essay in Game Time, the most recent of his baseball books, published in 2003). My favorite parts of "Streakers" dramatize the afternoon that Angell spent at Cesar's Inn, a small bar/hotel in Milwaukee, during the World Series between the Milwaukee Brewers and the St. Louis Cardinals (the Cards won the Series in seven). At the risk of indulging what Phillip Lopate has elsewhere decried as the romanticizing of the saloon, I'll admit that, as a committed Fan Of Bars, especially of the townie-dive sort, I love the way Angell extols the simple virtues of Cesar's and of its locally-famous owner (Audrey Kuenn, wife of Brewers manager Harvey Kuenn), neither sentimentalizing the patrons nor condescending to them.

The passage is so alert and fun and well-written and packed with evocative details that I'll quote the bulk of it: 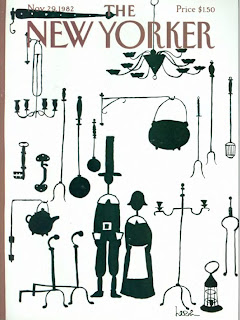 I belonged to the Brewers by now, in short, and my affection for the team and the town had been secured, if that was needed, by a noontime visit I had made the previous day to Cesar’s Inn, the West Milwaukee tavern owned and operated by Audrey Kuenn; Mrs. Manager. The place is only a few blocks from County Stadium—you can see the banks of lights from the front door—so it’s convenient for Harvey; the Kuenns live in the back of Cesar’s, with their rooms separated from the bar by a Dutch door, the top half of which seems to be open at all times. The bar is a low, smoky, exceedingly cheerful room, with cardboard cartoon cutouts of Harvey’s Wallbangers stuck up behind the bottles, and the roar of Brewer talk among the patrons competing with the big, electric jukebox—a good jukebox: the J. Geils Band’s “Angel in Blue,” Alabama’s “Mountain Music,” Eddy Duchin’s old “Time on My Hands,” Smokey Robinson, the Andrews Sisters. There is a pool table jammed into one half of the lounge, and the lights on the wall are imitation baseballs, with little crossed bats underneath. Photos and paintings of Harv everywhere, of course. When I was there, the folks at the bar were youngish men in T-shirts and mustaches and old high-school-team windbreakers and emblazoned industrial caps; they mostly drank Miller’s, but one man near me at the bar was working on Hennessy’s cognac with Pabst chasers. The clientele at Cesar’s Inn turns up in bunches after the shifts change at big manufacturing plants in nearby West Allis—Harnischfeger (overhead cranes) and Rexnord (chain belts) and Allis-Chalmers. The late shift sometimes includes men from another neighborhood plant—Gorman Thomas or Jim Gantner or Pete Vuckovich—in for a brew after a night game. On busy nights, Bob McClure and Mike Caldwell have been known to slip behind the bar to help out.

I introduced myself to Audrey Kuenn, a trim, extremely pleasant woman in blue slacks and a tan blouse, who told me that she had experienced a few moments of doubt when Harvey was named manager, back in June, because she didn’t want to lose her close friendship with the Brewer wives, who call her Mom. But it didn’t change; they all went on sitting together in Section 3, just as before, and screamed the team home. The Kuenns have been married for eight years (each was married previously), and now I asked Audrey if she’d ever seen Harvey play ball. “No, I didn’t,” she said. “It used to be the old Braves who played in this park, you know, Eddie Mathews and Joe Adcock and the rest”—the Braves won a World Championship in 1957 but abandoned Milwaukee in 1966, moving to Atlanta and leaving a very bitter feeling among local fans for their perfidy—“and I never got to see any American League players.”

“He was something,” I said, and she said, “I’ll bet. But I don’t think I could have stood it, watching Harv—I get so excited.”

Our conversation was conducted in fragments, because Audrey Kuenn had bar business to look after, and the phone kept ringing (the Kuenns are in the book, and one of the callers that morning was a man who told Audrey to tell Harvey to tell Gorman Thomas to keep his eye on the ball; “I sure will,” she said), and the Kuenns’ three dogs—Nicky and Jingles, the boxers, and Ugsly, the pug—seemed a bit restless, too, and no wonder. Then the bar talk and Series talk went up a notch or two when a young man and his girlfriend came in, bringing along their boxer, name of Harley, who had a half-embarrassed, dog-in-a-paper-hat look, because he had been painted Brewer blue from head to foot and nose to tail (blue hair spray, it turned out), with a tan “1” on his back and the Brewer baseball-mitt logo in tan on his forehead and a wiggly tan “Go Brewers” in script on each flank. “It’s better on his other side,” Harley’s owner told me, pointing to the message. “I got better at it the second time.” Audrey Kuenn Went out back to tell Harvey to finish getting dressed, because it was time for him to get to the park, and when she returned, just before Harvey came out and said hello to everyone in the place, and then goodbye to everyone in the place, she said to me, “When we got to the hotel in St. Louis the other day, I said to Harv, ‘Can you believe we’re here?’ and he said, ‘Never in a million years’.”

Nothing needs to be added here; I'll let the details do all of the work, as Angell does.

Top photo of Cesar's Inn via OnMilwaukee.
Posted by Joe Bonomo at 8:56 AM

Beautiful record of an extra-baseball scene. You’ve whetted my appetite for your Angell book (I know, I know. I’m stumbling onto it 5 years or so late).

I enjoy your essays, Joe. Is there some way of getting holding of This Must be. . ..? Amazon et al say it’s unavailable.

Stuart, thanks for writing and for the kind words. I've got some copies of Obsession around here. If you want to write me at jbonomo@niu.edu we can work something out. Thanks!