Roger Angell and the Distant, Distant Past 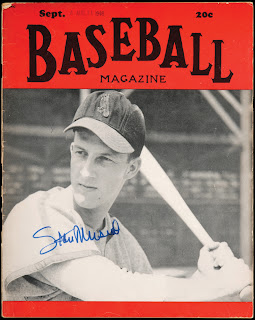 In "Early Innings," an essay in The New Yorker on February 24, 1992, Roger Angell—perhaps inspired by the taut, ridiculously entertaining World Series of a few months earlier, perhaps tugged by thoughts of mortality and nostalgia, perhaps simply on assignment—turned his attention to his earliest memories of baseball, producing a characteristically warm, detail-rich essay on memory, longing, and time, a vivid snapshot of the Depression Era as recalled by a precocious ball fan and avid reader.

One paragraph in particular stands out as a striking illustration of the corrosive effect of late-Twentieth century's literal and figurative NOISE, and of the distance a fan had to travel, both in his imagination and in his city, to see and experience baseball. "Sports were different in my youth—", Angell writes,

a series of events to look forward to and then to turn over in memory, rather than a huge, omnipresent industry, with its own economics and politics and crushing public relations. How it felt to be a young baseball fan in the thirties can be appreciated only if I can bring back this lighter and fresher atmosphere. Attending a game meant a lot, to adults as well as to a boy, because it was the only way you could encounter athletes and watch what they did. There was no television, no instant replay, no evening highlights. We saw the players’ faces in newspaper photographs, or in the pages of Baseball, an engrossing monthly with an invariable red cover, to which I subscribed, and here and there in an advertisement. (I think Lou Gehrig plugged Fleischmann’s Yeast, a health remedy said to be good for the complexion.) We never heard athletes’ voices or became aware of their “image” Bo Jackson and Joe Montana and Michael Jordan were light-years away. Baseball by radio was a rarity, confined for the most part to the World Series; the three New York teams, in fact, banned radio coverage of their regular-season games between 1934 and 1938, on the theory that daily broadcasts would damage attendance. Following baseball always required a visit to the players’ place of business and, once there, you watched them with attention, undistracted by Diamond Vision or rock music or game promotions. Seeing the players in action on the field, always at a little distance, gave them a heroic tinge. (The only player I can remember encountering on the street, one day on the West Side, was the Babe, in retirement by then, swathed in his familiar camel-hair coat with matching cap.) 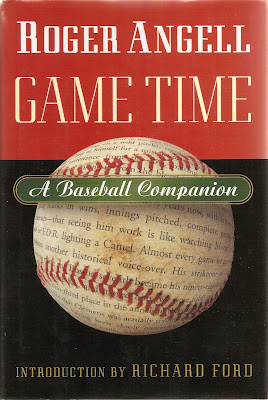 I understand those of you out their inwardly sighing, or rolling your eyes. Every generation laments the purity of its past, its long-gone riches trampled and sullied in the name of dubious progress. In my time. Kids today! Etc. To his credit, Angell often catches himself when he's being mawkish, but I think that the origin of this essay, which seems to be highly personal and urgent, even for Angell, required that he shrug off any inner voices that might've said, This is precious. Angell really wants us to see how much the sport—less so, the game—has changed. The spectacle of the ballpark in the early 1990s seems quaint relative to the bombast we experience now—I sometimes have to plug my ears during games, but not at Wrigley!—and Angell has duly noted this in subsequent essays. Regardless, in 1992 the '30s and '40s must've seemed as if they stood in distant centuries to Angell.

He once saw Babe Ruth on the street!

Near the end of the essay, Angell describes living briefly in Missouri as a teenager; his father visited and became involved, with his son, in a pick-up game with some ranch-hands. The feasibility of such spontaneous, enthusiastic ball-and-glove sporting now, Angell marvels and laments, is minuscule. He worries about how sentimental he's becoming with these memories, but guards against it with intimacy, sincerity, and candor: the blended wellspring of any great essay, as "Early Innings" surely is. "We know everything about the game now," he sighs near the end,

thanks to instant replay and computerized stats, and what we seem to have concluded is that almost none of us are good enough to play it. Thanks to television and sports journalism, we also know everything about the skills and financial worth and private lives of the enormous young men we have hired to play baseball for us, but we don’t seem to know how to keep their salaries or their personalities within human proportions. We don’t like them as much as we once did and we don’t like ourselves as much, either. Baseball becomes feasible from time to time, not much more, and we fans must make prodigious efforts to rearrange our profoundly ironic contemporary psyches in order to allow its old pleasures to reach us. My father wasn’t naive; he was lucky.