Fortuity, plus or minus: Roger Angell on the breaks 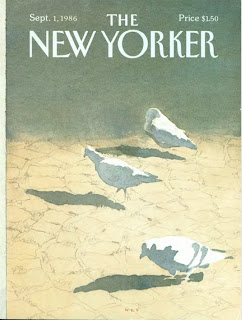 In the late summer of 1986, while happily watching his beloved Boston Red Sox cruise into the baseball postseason, Roger Angell mused on the nature of luck, both of the good and bad variety. In "Fortuity," an essay that appeared in the September 1, 1986 issue of The New Yorker (it was reprinted two years later in Season Ticket), Angell explores the place of fortuity in the game of baseball, of the vagaries of hot streaks and cold streaks that plague players and teams alike in indiscriminate, seemingly mean-spirited fashion. He concentrates on two improving teams, the San Fransisco Giants and the Oakland A's, the latter a team that had suffered plenty in the decade but that seemed to be righting the ship as they'd recently hired Tony La Russa, who brought a new level of acumen and confidence into the clubhouse. (La Russa, of course, would guide the A's to three World Series, in 1988, 1989, and 1990, winning in '89.) In 1986 the A's enjoyed streaks where they won games in "clusters" (a favorite word of Angell's), and endured streaks of the opposite value. From his privileged perch in the press box and via visits to clubhouses, Angell observed the A's closely (with one eye on the Red Sox' ascension) and wondered, as he has his whole career, on the degree to which luck guides the sport. Near the end of the piece, he describes waking up in Maine on vacation late in the season and turning to the sports pages to discover that the A's had lost yet again, this time to the Twins: "and as I studied the box score in the paper and tried to squeeze more news out of it than it could convey, I murmured to myself. 'Oh, if the A's would only—'."

Here, the essay opens outward in the generous, reflective manner of Angell's best pieces on the game:


Then I stopped. Would only what? I thought about it for a moment or two, and then it came to me that what I badly seemed to want for a team I cared about was an end to bad luck, an end to bad news—no more more fortuity, to use Sandy Alderson’s word. I wanted the exact opposite of what my friend had seen as established: I wanted good news forever. Then—within an instant, I think—I perceived something I hadn’t quite understood about baseball before. Alderson had said that thirty or forty percent of the game was beyond his control or the manager’s or the players’ control. But I am a fan, and my lot is far worse, for everything in baseball is beyond my control; for me every part of the game is just fortuity. Because I am a fan, all I can do is care, and what I wish for, almost every day of the summer, is for things to go well—to go perfectly—for the teams and the players I most care about: for the Red Sox, for the A’s now, for the Mets, for the Giants, for Tom Seaver and Keith Hernandez and Roy Eisenhardt and Don Baylor and Wade Boggs and Carney Lansford and Tim Shanahan and Darryl Strawberry and Roger Craig and many, many others. I think every true fan wants no less. We wish for this seriously, every day of the season, but at the same time I think we don’t want it at all. We want our teams to be losers as well as winners; we must have bad luck as well as good, terrible defeats and disappointments as well as victories and thrilling surprises. We must have them, for if it were otherwise, if we could control more of the game or all of the game and make it do our bidding, we would have been granted a wish—no more losing!—that we would badly want to give back within a week. We would have lost baseball, in fact, and then we would have to look around, without much hope, for something else to care about in such a particular and arduous fashion.

Affectionate and wise observations from a man who'd been enjoying baseball since the 1930s and who'd been writing about it thoughtfully since the early 1960s. Love it, curse it, roll your eyes at it: baseball is his game, with all of its profound disappointments and trivial joys. No other sport requires the kind of duality that Angell describes here, our wish to control destiny and our love of the game's capriciousness. Angell has made a career out of exploring baseball as a narrow subject; the point of view of his fan-persona, his love and knowledge of the game, and his deliberate and searching writing about it, leads him to larger subjects that the game, and his impulse to write, contain. His best essays are both detailed observations and wide-screen rumination: the precise, evocative details cohere, as in a pointillism painting, to a vaster story.

What's especially poignant about "Fortuity" is what it innocently portends. Seven weeks after this issue hit the stands, the Red Sox lost the World Series to the New York Mets in an excruciating manner: "It Got By Buckner!" being only the most infamous of the gaffes and bad breaks suffered by Red Sox Nation that fall. No more losing! the fans cried. Heartbreak, indeed. Yet Angell—a Red Sox fan in his blood, who got to cheer on and write about the team's eventual 2004 World Series Championship; he was 84 that autumn—would have it no other way, as melancholy as that is to admit.