As It Had Always Been: Roger Angell and Clichés

Writing about Spring Training in The New Yorker on April 23, 1979, classicist Roger Angell goes a little meta while observing a journeyman pitcher (the San Francisco Giants' Gary Lavelle) warming up under the eyes of his pitching and catching coaches, Larry Shepard and Tom Haller, respectively. Angell observes: 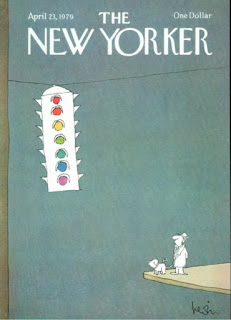 All this seemed to be happening with unusual clarity—Shepard’s stance and Haller’s crouch, and the sound of the ball hitting the glove, and the low slant of the afternoon sun, and the odd look of batted balls and infield throws when they are seen almost from ground level about three hundred feet away-and for a brief moment I had the feeling that I could also see myself within this scene, with my feet up on the row just below me and my elbows on my knees: I was watching myself watching baseball. This was peculiar, to say the least. I knew that I had observed almost exactly this same scene dozens of times, or perhaps hundreds of times: some young pitcher warming up on the sidelines with a coach beside him, and then the pitcher walking into the game with his large strides and with his warmup jacket over his arm, and then (usually, not always) the kid getting his ears knocked off in there. This time, it had seemed to be waiting for me, so to speak, and all I had to do was to walk into the picture and sit down in order to make it fresh again, and also to make it old—to bring it back just as it had always been.

A paragraph later, Angell admits to being embarrassed by old-school baseball clichés (in this case, a manager wanting to climb back down the ladder and become a low instructor, "to work with the kids"). But in a moment, Angell's implicating himself, acknowledging that he's continually fallen for the game's clichés, that it's the transcendence of those hackneyed phrases and gestures that renews the game for him:


I’m still not entirely sure why the sight of some young pitcher warming up in spring training means so much to me, but I would almost rather watch and write about that than see Reggie Jackson or Pete Rose come up with men on base in some jam-packed, roaring stadium in October. The old coach with his hands in his pockets watching the young man pitching is the same sports cliché—it’s almost a recruiting poster for baseball—but I’m not sure that it should be resisted for that reason. Its suggestions are classical. A mystery is being elucidated before our eyes; something is being handed on. The young man may fail (probably he will), but in time he may do better. One day, he may surprise his tutors, and they will turn and begin to take note of him when he is in the game. He will become better known, possibly famous, he might even become one of the best pitchers ever. It could happen; probably it won’t. Either way, it touches something in us. Because baseball changes so little, it renews itself each year without effort, but always with feeling.

He seems to be talking about a bit more than a routine event beside a meaningless game. At his best, Angell maintains that delicate balance between sentiment and sentimentality; he's a master acrobat. The reasons that drew him to Florida each year to write up the Spring Training reports, the duties of his job notwithstanding, involve the hoary stereotypes of the sad, pale winter baseball fan, the lure of eternal springs, the possibility that "wait 'till next year!" (that old cliché) might mean this year; what delights him is how the ordinary and routine keeps surprising him, how the picture he keep walking into develops subtly each time. That's reason enough for him, and for us, to go back every year.