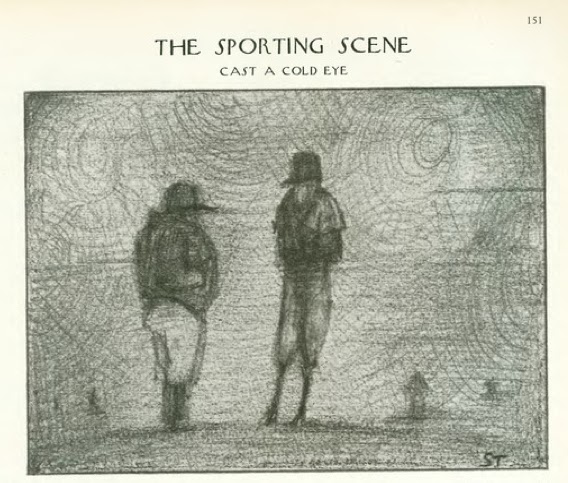 Nearly overcome by the gloom in his essay "Cast A Cold Eye," in the November 15, 1976 issue of The New Yorker, is Roger Angell's brilliant recap of one of the most iconic baseball moments of the 1970s. Chris Chambliss's bottom-of-the-ninth, game-winning home run in Game Five of the 1976 Championship Series between the New York Yankees and the Kansas City Royals is remembered mostly for its aftermath: the vivid assault of the field by overjoyed (and over served) Yankees fans and Chambliss's tense, insane attempt to circle the bases. It's one of my favorite memories of baseball and, frankly, one of my favorite images of New York. Major League Baseball has recently opened its video vaults. Here's a fabulous three-minute summary of the October 14 game, the homer, the bedlam. And here's Angell's translation:

The ending was a sudden multiple tableau—almost a series of movie stop-frames—now fixed in the New York sporting memory. Frame 1: Chris Chambliss has just swung at Mark Littell’s very first pitch of the ninth inning, a fastball. He has swung from the heels, and the ball is now suspended somewhere out in the darkness above the right-center-field fence. Chambliss stands motionless at the plate, with his feet together and the bat still in his right hand and his head tipped back as he watches the ball—watching not in admiration (as Reggie Jackson has been known to do) but in true astonishment and anxiety. Frame 2: Al Cowens and Hal McRae, the Kansas City center fielder and right fielder, stand together at the base of the wall, waiting and looking straight up in the air, like a pair of bird-watchers anxious to confirm a rare species. Frame 3: McRae leaps, twisting his whole body into a single upward plane, with the left arm extended and the open, straining glove at its apex. Frame 4: McRae descends empty-handed, and falls back against the fence in despair, slumping there like a discarded marionette. A whole season is gone. Frame 5: Now it is Chambliss’s turn to leap—a great bound of joy, with both hands raised high in triumph. He begins his ritual tour of the bases, running slowly at first and then (Frame 6, Frame 7) with increasing attention and urgency, as he sees surging, converging waves of out-scattering, frantically leaping spectators pouring onto the field from the left-field and right-field grandstands. These people sprint through descending streamers of toilet paper and torn-up newspaper and other debris, and through the reverberating, doubly and triply reechoed explosions of shouting. They all meet near second base—Chambliss, the thickening and tumbling crowds, the waves of noise, and the waves of people (multiple frames here, faster and faster, all blurring together)—and now it is plain that he is almost running for his life. He is knocked down between second and third, and springs up again, holding on to his batting helmet and running now like a fullback, twisting and dodging through the appalling scene. It is a new game—one for which we have no name yet, and no rules. Chambliss makes it at last to the dugout, without touching third or home (third base has disappeared), and vanishes under the lip of the dugout, with his uniform shirt half torn away and the look on his face now is not one of joy or fear or relief but just the closed, expressionless, neutral subway look that we all see and all wear when abroad in the enormous and inexplicable city. Later, Chambliss comes back onto the ripped-up, debris-strewn field with two cops, and after a few minutes’ search they find home plate and he steps on it.

Angell characteristically expands pure frenzy into pure narrative, evocative, deceptively organized, and vivid. I imagine that he was there—I can't picture him at home grumbling that he's forced to watch the game on his nemesis, television—and I picture him simultaneously revelling in the present-tense madness of it all and taking it in with a wide-angle lens. What's especially notable about this small recap—which Angell's been the master of since he began writing about baseball in the early-1960s—is the buoyant effect it seemed to have, retrospectively, on what came before it in the essay. "Cast A Cold Eye" is, as the title suggests, a somewhat grim piece, an assessment of a game that Angell loves but that he fears is changing irrevocably for the worse. The villains are those that Angell had been griping about for a couple of years at this point: postseason night games in frigid temperatures to satisfy television executives, the appearance of “cookie-cutter” stadiums and artificial grass, free agency and explosive player salaries, implementation of the Designated Hitter, the rising, competitive popularity of professional football, etc.. In the midst of the bottom-line corporatizating of the game comes Chambliss's homer and all of the pent-up Bronx mania. Angell didn't seem pleased with the uncouth fans—he'd wag his finger at them for a few more years before shrugging his shoulders and accepting more coarsening of the sport—but he was delighted that the game could still surprise him—us—with moments like Chambliss's homer, which catapulted the Yankees into the World Series for the first time since 1964.

Perhaps so moved by his disconsolate response to the dynamics of the sport, Angell ends "Cast A Cold Eye" with highly unorthodox gesture: he gets not only personal, but autobiographical, bringing his then six-year-old son John Henry into the essay in its final moments. Earlier in the year his family had tried to see a Mets/Cubs game but steady rain fell and Angell figured that the game would be called. By the time they arrived back home, naturally, the rains had ended; they watched the rest of the game on television. The essay ends:


"I am sorry, John Henry," I said. "I didn't think they were going to play today."
"Oh that's all right," he said at once. "I liked it there. That was cool."
So it was all right, after all. And maybe one batter is plenty to see, the first time. It was a beginning.

A deeply affectionate person always risks sentimentality. Angell does so here. As a writer he didn't regularly offer glimpses into his private life, especially in his early pieces; his baseball-watching persona is warm, but guarded. A sport going awry, a miraculous home run, and the game as seen through a young boy's warm eyes seemed all of a piece for Angell in 1976. It is a new game—one for which we have no name yet, and no rules. He was fifty-five. It was a beginning.
Posted by Joe Bonomo at 10:40 AM