Family on the Moon

I was alerted (via Retronaut) to the photograph below at Universe Today: 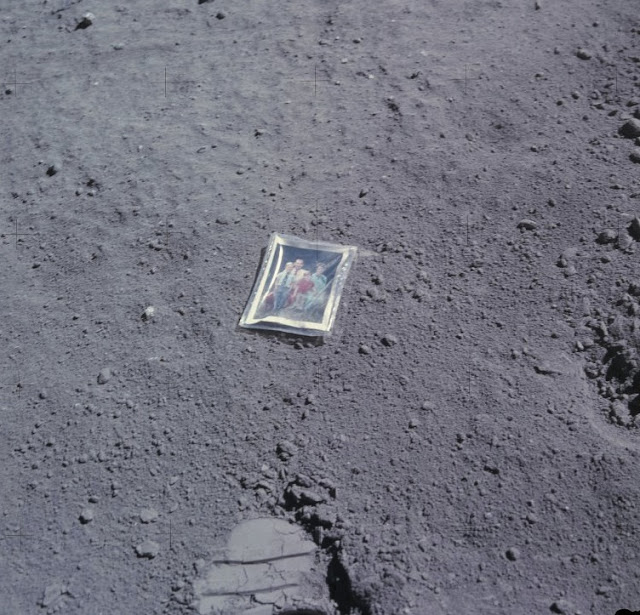 
On April 23, 1972, Apollo 16 astronauts Charlie Duke and John Young embarked on the third and final EVA of the mission, exploring the Descartes Highlands via Lunar Roving Vehicle. During the EVA, before setting up a Solar Wind Collector, Duke placed a small family photo he had brought along onto the lunar surface and snapped a few photos of  it with his Hasselblad film camera. This is one of the photos.

The portrait shows Charlie, his wife Dorothy, and their two sons Charles and Thomas. It looks like they are sitting on a bench in the summertime.

The family photo, gingerly wrapped in clear plastic and slightly crumpled from being stashed in the pocket of a space suit, was left on the Moon. It presumably still sits there today, just inches away from Charlie’s boot print—which, presumably, is also there.

At the time of this writing it’s been exactly 40 years to the day that this photo was taken.

It's safe to say that I'll be obsessing over this for a while. A posed family portrait, Sears-perfected, wrapped in plastic, resting on the surface of the moon: it's so potent an image—a fact—as to be nearly beyond belief. This is the stuff of myth and lyric poetry, of surreal dreams that you wake from and barely recall. Dad's footprint—patriarchal, protective, massive—will remain by the photo for eons, during which families on earth will take root, sprout, and wither generation after generation after generation, homes built, houses razed. Duke's own lineage might one day vanish. But his early 1907's family will stay, smiling, on the surface of the moon, a cartoon-like transposing of the promises of the suburban Space Age, an odd but moving intrusion of the frail human family into time-free, infinite darkness. This stuff doesn't happen in real life. Right now, I can't think of anything weirder. Or more affecting.
Posted by Joe Bonomo at 7:12 PM