"The shape and color of time": Kazin and brownstones

"... Every image I had of peace, of quiet shaded streets in some old-time America I had seen dreaming over the ads in the Saturday Evening Post, now came back to me as that proud procession of awnings along the brownstones. I can never remember walking those last few blocks to the library; I seemed to float along the canvas tops. Here were the truly American streets; here was how they lived. To get that near to brownstones, to see how private everything looked in that world of the cool black painted floor and green walls where on each windowsill the first shoots of Dutch bulbs rose out of the pebbles like green and white flags, seemed to me the greatest privilege I had ever had. A breath of long-stored memory blew out at me from the veranda of Oyster Bay. Even when I visited an Irish girl from my high school class who lived in one of those brownstones, and was amazed to see that the rooms were as small as ours, that a Tammany court attendant's family could be as poor as we were, that behind the solid 'American' front of fringed shawls, Yankee rocking chairs, and oval daguerreotypes on the walls they kept warm in winter over an oil stove—even then, I could think of those brownstone streets only as my great entrance into America, a half-hour nearer to 'New York.'

I had made a discovery; I had stumbled on a connection between myself and the shape and color of time in the streets of New York. Though I knew that brownstones were old-fashioned and had read scornful references to them in novels, it was just the thick, solid way in which they gripped to themselves some texture of the city’s past that now fascinated me. There was one brownstone on Macdougal Street I would stop and brood over for long periods every evening I went to the library for fresh books—waiting in front of it, studying every crease in the stone, as if I were planning its portrait. I had made a discovery: walking could take me back into the America of the nineteenth century." 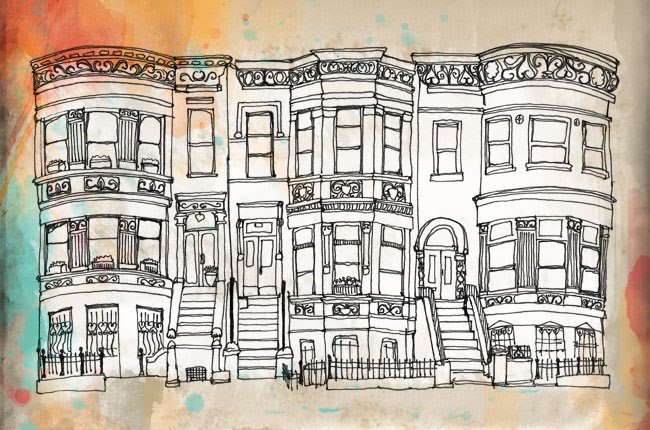 Many decades later. Sketch of Brooklyn brownstones by Claire Bonnor via The Boho Bandwagon from Boheem Design, a graphic design agency based in Sydney, Australia: "Ahhh, Brooklyn. Take me in. It's all too easy to whip out the digital camera to try to capture the charming streets of Park Slope. A few days ago I hopped aboard the F train with sketchbook, pen, coffee and bagel in-hand, and parked myself opposite a row of these quintessential Brooklyn abodes for about 2 hours."

On a related note, I recently contributed a piece to Essay Daily on Luc Sante's "My Lost City," one of my favorite essays about New York City:


Every generation, it seems, mourns the beauty of its surroundings, no matter how shabby or troubled, certain already of its vanishing to the next generation, which will continue the process of loss and discovery. Meanwhile, while recognizing with a twinge of pain our own, minor losses, we come closer to understanding the grand sweep of history and our small but essential place in it.
“My Lost City” is Luc Sante’s sobering tribute to a city he barely knew.