I've always been interested in the idea of shape constancy: our perception of an object remains constant even as our perspective on it, or sensations of it, changes. In short, we adjust to changing stimuli so that the world remains knowable and rational. Our apprehension of a door is an oft-used example; I remember it from a Psych class in college. Here's an image from Wiki:

Regardless of how distorted the image of the door becomes—narrower as it's opening or closing—we still perceive the original rectangular shape; the third image above doesn't freak us out, and we don't think the door is melting or somehow shape-shifting. We know it's the door, only that it's shape changes relative to our distance from it and the degrees it swings on its hinges. All of this, of course, happens beneath our rational consciousness, and happens with light and location, as well, and with music and speech. From Wiki:


In music, subjective constancy is the identification of a musical instrument as constant under changing timbre or "conditions of changing pitch and loudness, in different environments and with different players." In speech perception this means that vowels or consonants are perceived as constant categories even if acoustically, they vary greatly due to phonetic environment (coarticulation), speech tempo, speaker's age and sex, speaker's dialect, etc.

You know it's your dad's voice, whether he's in the room with you, on the phone, on tape, Skyping, or yelling over a hill.

Is there such a thing as memory constancy? Our recollections vary widely (wildly), changing shape and size, re-told and amplified, and though the essence of a memory might stay the same, the archetypal story that it tells, so many of the particulars fade and are replaced. A door doesn't have a story to tell; we have a story to tell about the door; the door remains a door no matter how it's perceived; a story of the door changes depending on when I'm telling it, to whom I'm telling it, and on what I need from the story. There's very little constancy in memory, it seems, apart from its obsessive nature. 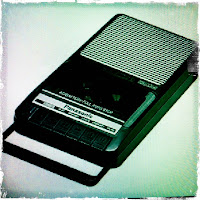 Take dad's voice: though I know it's him across the various iterations above, my recollections of having heard him might change. When I was 8, my dad worked temporarily in Germany. I think it was for a month and a half, which at my age was an enormity. Before he left, he recorded himself reading one of my and my younger brother's favorite Curious George books. A week or so after he left, my mom sat with us in our living room with a tape recorder and the book, and issuing from a cheap Certron cassette was my dad's voice. Delighted, we read along with him (I remember distinctly the sound of the pages turning on the tape). Psychoacoustics: I knew that it was my dad, though he'd been pinched down to quarter-inch tape, reduced to a sonic signal, invisible yet present everywhere in the room for the cherished half hour or so as we listened to the tape. My memories of that event, however, have changed considerably as I, and my brother and father, have grown, as the event has receded into the past and grown mythically, as my love for narrative and sound and my obsession with adolescence and domestic spaces and family has deepened. What has remained constant is the event; what's morphed, depending on my mood, my desires, my needs, is my emotional attachment to the event. Vivian Gornick writes of the difference between a situation and the story that we make of it. (Art: to put together.) Perhaps the only constant in the past is the past itself.

I used to think that a .gif file was a good metaphor for memory. I'm less sure about that. True, a memory has no fixed start or finish, and a memory is an obsession in that it plays constantly as a .gif file does. But too much of a .gif remains too constant: the particulars remain the same as the story is told and re-told. That may be my past, but it's not my memory.
Posted by Joe Bonomo at 12:58 PM

Email ThisBlogThis!Share to TwitterShare to FacebookShare to Pinterest
Labels: memory, shape constancy, the past, writing

Thinking about "constancy in memory" led me to re-examine Dali's painting The Persistence of Memory. Forty years after he painted it, Dali said he finally understood what it meant: "The melting watches represent the Golden Fleece. Jason's voyage symbolizes the pursuit of perfection, just as bending time epitomizes my long journey seeking the light of truth." Hmm. Should we trust the old trickster on that? I don't know. But it's interesting how the "event" of the painting became, quite literally, myth-like for him.