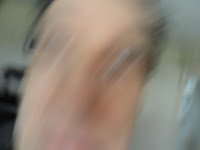 A scratch on a 45 or an album was the uninvited bully, the mean kid who shows up at your party, a little gouge you'd see with a sinking stomach as you held the album up to the light to reveal the chip, the dent, the cut. We'd try to shoo away the skip by placing a penny on the tone arm or, when that didn't work and we were feeling bold or desperate enough, by pressing down ever so lightly on the needle as the skip approached—right after the chorus or right when the solo starts or during the first line of the bridge, the interruption you'd come to know as a wound that never healed right—my finger shaking slightly, and I'm hoping for just the right touch, just the right balance between pressure and lift so when that skip comes the needle would move right through him, unafraid, and the next time we'd play the album the needle would play right through him again and eventually he'd get the message and skulk away. Or if I didn't succeed, if I lost my Zen-like poise there in basement or if the gouge was just too deep, no magic touch could finesse that scratch out of the room, he was there for good, the unwanted step-sibling, the weird cousin who came for the summer but stayed, blinking at a past of melancholy at which you could only guess—there for good, to trip the song into permanent disability. Yeah, a scratch was like that, a figure out of bad dreams who showed up one day and stayed. No amount of gentle laying-on-of-hands or Windex or dusting or praying would ever get rid of him, and the world would go out of focus and back into sharpness and something would change for good, though you couldn't name exactly what it was.
Posted by Joe Bonomo at 5:32 PM