The Crack In The Picture Window 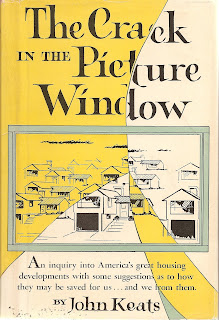 Or, "An inquiry into America's great housing developments with some suggestions as to how they may be saved for us...and we from them." So writes John Keats in The Crack In The Picture Window, a snarky, wholly of-its-era screed against faceless Suburbia. A Southerner by birth (he was born in Moultrie, Georgia in 1921), Keats attended the Universities of Michigan and Pennsylvania before seeing action in the Pacific during World War II. He published The Crack in the Picture Window in 1956 while reporting and writing for the long-gone Washington Daily News. During that decade Keats bought one of the Thousand Islands in Lake Ontario as a vacation home for his family, far, far from the suburbs. He was wrote several books of social criticism during his career, including Schools Without Scholars (1958), The Sheepskin Psychosis (1965), and What Ever Happened to Mom's Apple Pie: The American Food Industry and How to Cope With It (1976), but is best known for The Crack In The Picture Window. Keats died in 2000, in Kingston, Ontario, Canada. He was 79.

I picked up The Crack In The Picture Window years ago during one of my many manic forays into the literature of Suburbia, a subject that has long fascinated me. Keats's book is a prose time capsule: he lists several august titles in the bibliography (for "The scholarly reader who wishes to bog himself down with further researches into development life, its origins, delights and despairs"), including articles from The New York Times, American Journal of Sociology, and U.S. News & World Report, as well as sober Congressional findings, yet the tone of The Crack In The Picture Window is deathly snide and sarcastic. In it, he dramatizes the life of Mr. and Mrs. John Drone (yep). "Welcome to the Inquest," Keats begins,

For literally nothing down—other than a simple two percent and a promise to pay, and pay, and pay until the end of your life—you too, like a man I'm going to call John Drone, can find a box of your own in one of the fresh-air slums we're building around the edges of America's cities.

"There's room for all in any rice range," he continues, "for even while you read this,"

whole square miles of identical boxes are spreading like gangrene throughout New England, across the Denver prairie, around Los Angeles, Chicago, Washington, New York, Miami—everywhere. In any one of these new neighborhoods, be it in Hartford or Philadelphia, you can be certain all other houses will be precisely like yours, inhabited by people who age, income, number of children, problems, habits, conversation, dress, possessions and perhaps even blood type are also precisely like yours. In any one of these neighborhoods it is possible to make enemies of the folks next door with unbelievable speed. If you buy a small house, you are assured your children will leave you perhaps even sooner than they should, for at once they will learn never to associate home with pleasure.

Note the delicate diction. We're not going to get anywhere if Keats keeps holding back. He winds up, "In short, ladies and gentlemen,"

we offer here for your inspection facts relative to today's housing developments—developments conceived in error, nurtured by greed, corroding everything they touch. They destroy established cities and trade patterns, pose dangerous problems for the ares they invade, and actually drive mad myriads of housewives shut up in them. 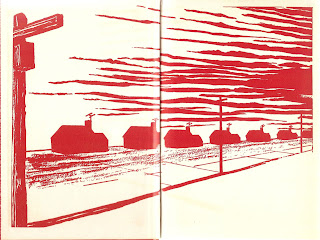 Paging John Cheever. John and Mary Drone live in suburban Washington, D.C., interesting to me because so did I. In fact, my parents purchased their split-level on Amherst Avenue in Wheaton, Maryland just a few years after the fictional Drones bought their box in northern Virginia. The Crack In The Picture Window condemns, punningly and witheringly, if unfairly and broadly, suburban anonymity, its "unnatural community," its colossal mortgages, stultified self-expression, necessity for "wonderful gadgets," and promises of "friendly neighbors but not true friends." Poor Mary Drone: "In short, Mary's ennui stemmed from the same sources which fed the ennui of Rolling Knolls. In Merryland Dell there was once again physical monotony, the enforced intimacy with neighbors, the homogeneity of the inhabitants, the constantly expressed desire to move 'sooner or later,' and—most of all—complete surrender of social and neighborhood affairs to a disillusioned, inexperienced, inept, frustrated matriarchy." I can't believe it took so long for the Key Parties to make it into Merryland Dell. But by then poor Mary was probably mad.

The Crack In The Picture Window is understandably dated, worth tracking down because of that. The book swiftly joined a long line of mid-century titles condemning the suburbs, many of which were written with an Apocalyptic tone, warning that the suburbs were going to destroy the fabric of American life from within. We're half a century away from Keats's warnings and the Organization Man in the Gray Flannel Suit and, for better or worse, the suburbs are still thriving, the incidents of suicide and "Mother's Little Helper" pill-popping within an acceptable range. Keats's writing is unsubtle, as most sourly humorous muckraking is; what makes his book especially notable are Don Kindler's incisive illustrations, also of-their-era, but far more evocative than Keats's heavy-handedness, and sometimes downright unsettling. I can find nothing online about Kindler, which is a shame because I'd like to see more of his work. Click to enlarge: 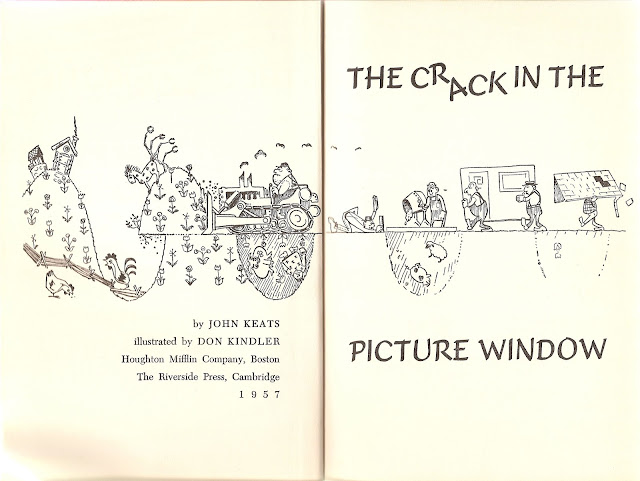 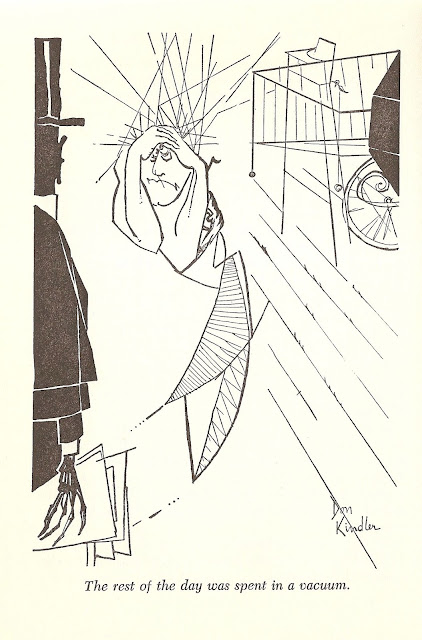 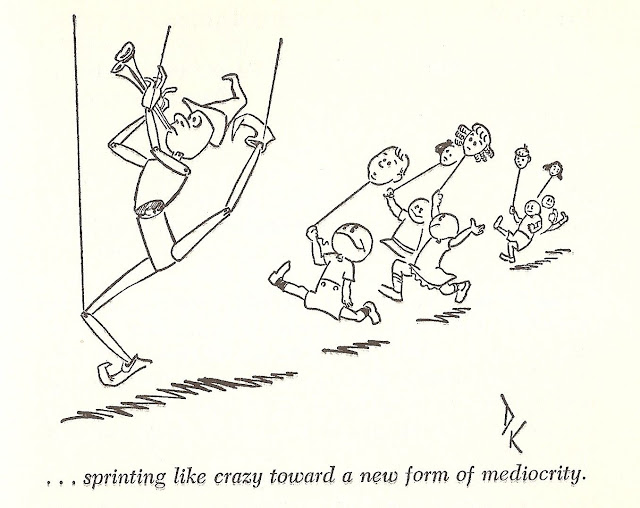 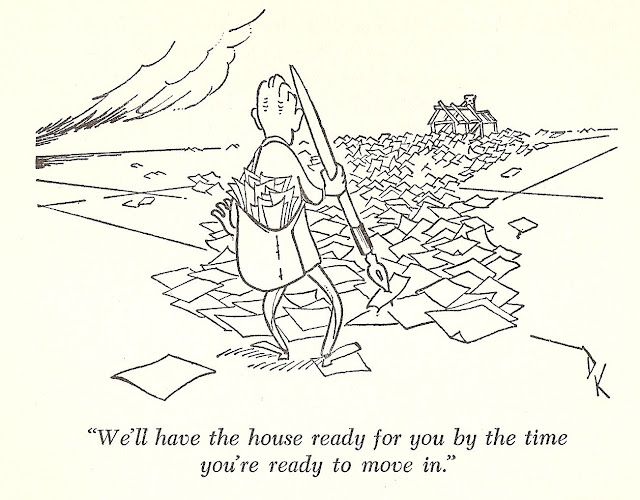 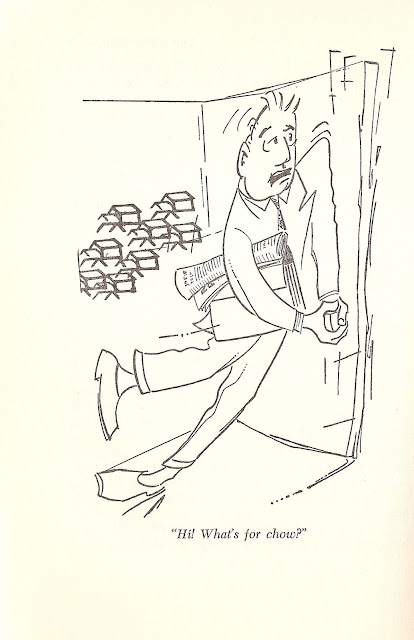 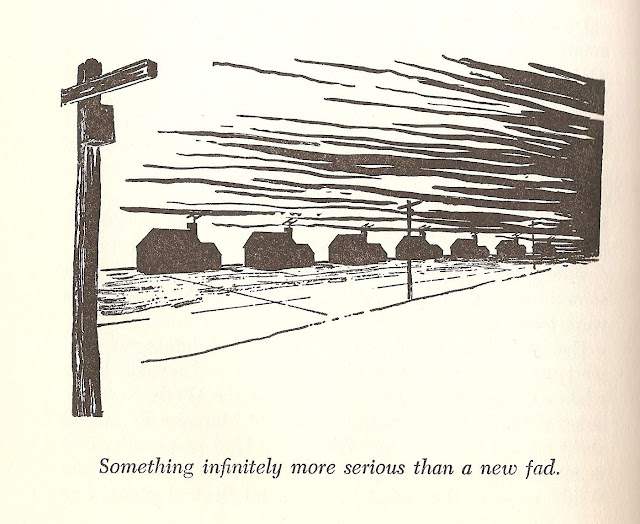 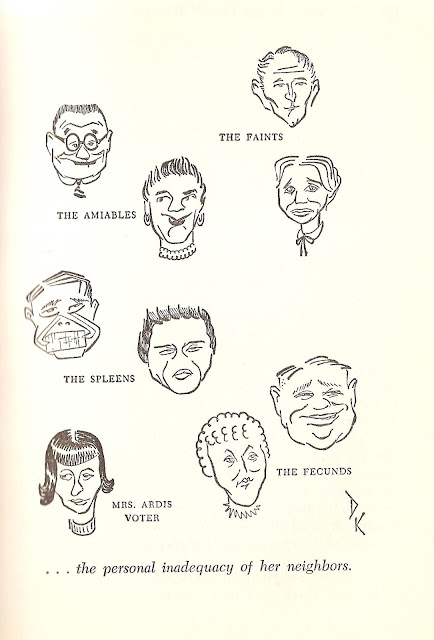 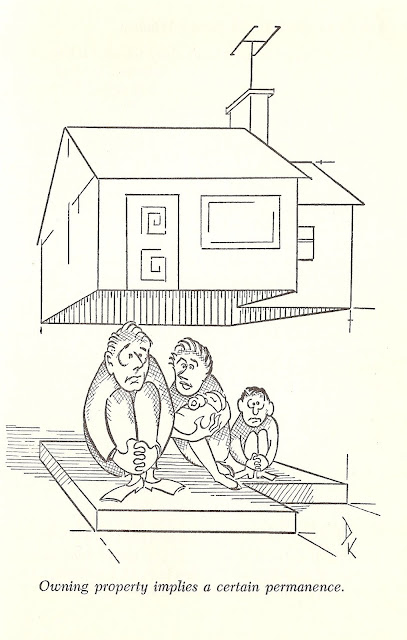 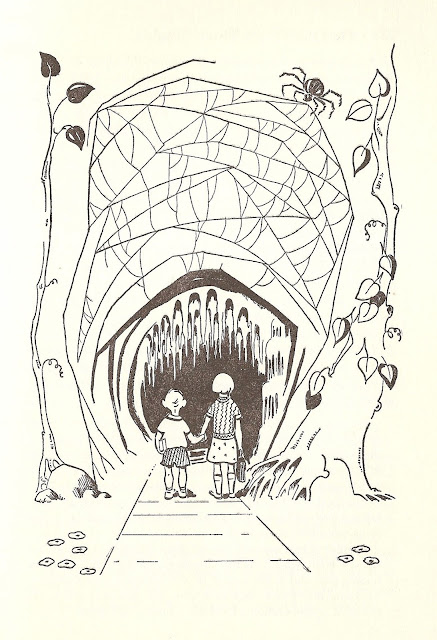 From Money Magazine, 2016. On electing Levittown, Pa to one of the 50 Best PPlaces to Live in the US

"A planned community that dates to 1952, this Philadelphia suburb is relatively new compared to its neighbors. Yet what Levittown lacks in history it makes up for with affordable homes, outdoor spaces, good schools, and humane commutes. The median house in 2016 sold for just under $185,000; that’s a welcome relief to sticker-shocked home buyers moving to Levittown from other Philly burbs. Coupled with a median household income of $76,747, it mades sense that the town’s foreclosure rate is one of the lowest on our Top 50 list.

Levittown is part of the top-notch Bristol Township School District, which has strong academics as well as unique extracurriculars such as a multi-school squad of drummers and dancers. As part of Bucks County, Levittown locals have access to more than 700 acres of parkland, including running trails, biking paths, and a 134-acre wildflower preserve. Other family-friendly activities include touring the historic Peddler’s Village, apple picking at Shady Brook Farm, and riding roller coasters at Sesame Place, a Sesame Street-themed amusement park."