"Field Recordings from the Inside" 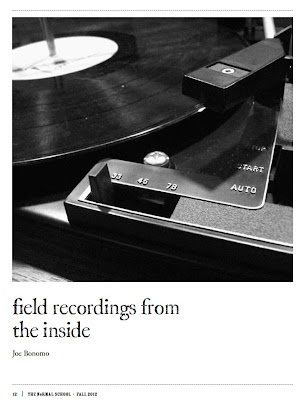 I was recently named the Music Columnist at The Normal School, where my writing will appear in each issue. My first piece "Field Recordings from the Inside," in which I take on 10cc, a Beatles cover band, and Late Elvis, appears in the current issue. I'm honored to have an essay next to work by Phillip Lopate, Ned Stuckey-French, Patrick Madden and many others.

From the opening of my essay:


My younger brother Paul had developed a phobia of listening to records played at the wrong speeds. We’d be listening to a 45 or an LP, and if I moved the RPM knob one way or the other and the song lurched into nasal, pinched hysteria or growled down to a menacing dirge, Paul would cover his ears, his eyes flashing. Sometimes he’d dash from the room, sometimes he’d cry. I can’t claim largesse these many decades later, manfully acknowledging that I soothed my younger brother in his distress—once in a while I’d torture him, quickly switching a record to the wrong speed to see his (predictable) reaction. Older Sibling Job Description, maybe, but an unkind responsibility not without its trails of remorse. Inside of me: that a record could be insidious, that music has an interior darkness I didn’t know about. Look what it can do.

Some music for your reading pleasure: