Conversations With Greil Marcus is out this Monday, October 1, with University Press of Mississippi's "Literary Conversations Series." For more than four decades, Marcus has explored the connections among figures, sounds, and events in culture, relating unrelated points of departure, mapping alternate histories and surprising correspondences. He is a unique and influential voice in American letters. Renowned for his ongoing "Real Life Top Ten" column, Marcus has been a writer for a number of magazines and websites, and is the author and editor of over fifteen books. His critique is egalitarian: no figure, object, or event is too high, low, celebrated, or obscure for an inquiry into the ways in which our lives can open outward, often unexpectedly.

In the book I've collected fourteen interviews with Marcus from 1981 to 2010. From my introduction:


Keith Richards has said that rock and roll is music for the neck down; Marcus has spent the better part of his career expanding that definition. Though he’s considered by most people a music critic—"Most of the time music is where I start," he concedes to David Weich. "Something musical makes a breach, opens up questions that I wind up pursuing"—these interviews illuminate Marcus’s considerable breadth of interests and knowledge.

You can order from Amazon here or directly from University Press of Mississippi here. 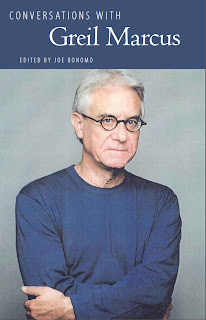 "I think Lester [Bangs] has had an enormous influence in terms of keeping people honest. He worked very hard not to lie, either by commission or omission. He worked very hard to say what he meant, to find out what that was, and then to find a way to express that as strongly and as plainly as he could. He continues to have a huge influence on people in that way."

“Some of us always used to say that rock and roll isn’t music. They’d say what is it? We’d say ‘life itself'.”

“Echoing through all of rock and roll is the simple demand for peace of mind and a good time. While the demand is easy to make, nothing is more complex than to try to make it real and live it out."

“I can’t write about music in a purely aesthetic manner. It doesn’t intrigue me.”

"I try not to walk through the world with preconceptions and rules, that something is good if it fits certain categories in certain ways. I just don’t understand that stance. It’s just so sterile...."

“The last thing I want to do is lead someone not to enjoy something they in fact already do enjoy.”

“My role as a critic is to intensify the experience other people might have with a given incident or object."

"I don’t see criticism as playing any kind of gate-keeping role, or any kind of moral guardian role, or guarding the public health. Criticism is written by people who have to write. Writers write: that’s what they do. It’s not a choice. It’s a way of being in the world."

"There is an infinite amount of meaning about anything, and I free associate."

"I try and write as if the distinctions that are always being thrown in our faces between high culture and popular culture, fine art and pop art, are meaningless, because I don't hear them, I don't see them."