A memoir's insides, an essay's seams 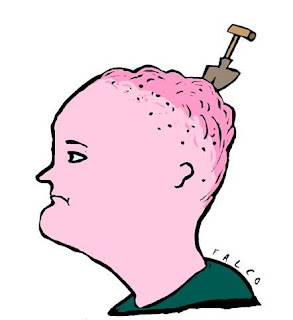 In an NPR story "Can We Learn To Forget Our Memories," corespondent Alix Spiegel reports on the recent work of Malcolm MacLeod, a memory researcher at the University of St. Andrews in Scotland. MacLeod and his co-researcher Saima Noreen devised a study where volunteers were asked to associate memories with 24 various words such as "barbecue," "theater," "occasion," and "rapid." When the subjects returned a week later they each sat in front of computer where the words appeared on the screen; if a word appeared in green, the subject was to repeat the associated memory aloud; if the word appeared in red she was to actively not think about the memory. "At the end of this process," Speigel writes,


the subjects were tested to see if there was a change in what they recalled. And there was—in the memories that had been repeatedly blocked.

"There was a significant forgetting effect, about a 12 percent drop in the level of details recalled," MacLeod says. "That's a large effect."

What's interesting, though, is which part of the memories were forgotten.

To understand, consider the following transcript that was given to me by Noreen, which is based on one of the actual memories in the study. It involves a girl getting a new pair of very short pants from her mother.


The cause of the event was me wearing a new pair of trousers that my mom had bought for me for secondary school when I first started. The consequence of the event was that at lunch time when I went to the bathroom an older girl started making fun of me for having short trousers. It was the first time I felt uncomfortable with what I was wearing. It made me feel very self conscious and I hated that.

That was the original memory, but after blocking this memory again and again, certain details began to fall away. It's not that she forgot what happened, Noreen says, instead, she began to lose the personal meaning associated with that memory.

"The fact that she said, 'It was the first time I felt uncomfortable with what I was wearing,' and also she forgot that she said that it made her feel very self-conscious and she hated that," Noreen says.

Essentially the blocking caused her to lose the fact that it was emotionally painful, which, Noreen says, is what they consistently found. In general, people didn't forget the facts; they forgot how those facts made them feel — the meaning of the facts.

This, Noreen says, is probably because what a memory means is usually derived after the event takes place. And though when you tell someone your memory it seems like it's part of the memory itself, personal meaning often changes.

"Obviously, if something negative happened but you're in a happy place now, then you might interpret that negative event as being not positive but ... potentially leading to where you are now, so you can see positive in that event," Noreen says. "You're always deriving different meanings from the same event."

And because that part of our memory shifts, it's less secure and easier to forget. At least that's their theory. But they don't yet know how long this forgetting effect will last, if it might evaporate over time.

The implications of this are, of course, are enormous. One can perhaps train oneself to actively, and successfully, "forget" the emotional scarring of a trauma or an injury, perhaps as a complement to therapy. The flip side is that one may learn how to forget the shame and guilt felt as one who inflicts pain and injury, and thus be more likely to cause additional suffering. Memory as a hall of mirrors with curtains over them.

I'm more interested in the implications of this kind of forgetting for autobiography. The more I read memoirs and essays, and the more I write autobiographically, the more I recognize that any piece of memory-driven personal writing that does not actively and consciously call attention to its own making lacks an essential integrity. Because the "meaning of facts" changes over time—given the vagaries of emotional distance, wisdom, immaturity, forgetfulness—than no fact of one's far, perhaps even near, past can ever be presented as certain. A memoir or autobiographical essay must at some point flip itself over, exposing its guts, revealing its seams and the fingerprints of its speculative author

The problem, of course, is art. (That sentence should probably be the subtitle to this blog.) Writers—excluding most militant post-modern and Language experimenters—want to fashion a text that is shapely and pleasurable to the reader, that dramatizes something essential beyond private, at times indulgent, cognition. There's a narrative in there somewhere, isn't there? (Am I getting conservative?) And if the story renders a kind of Montaignean wrestling with the "meaning of facts"—and, again, what autobiography doesn't?—than that story of shifting-attitudes toward the past must be shaped beyond "I felt this way, now this," some connective tissue that reminds us that the root of the word art is ar-, to shape, to mold.

I think more than ever that John Barth's "The Funhouse" and Robert Coover's "The Babysitter" are the most realistic stories of the last half century. Or at least, in terms of art, the most ethical, with their insistence on instability, shifting POVs, and the continually-morphing "meaning" of facts, memory, and desire. What must memoirists and personal essayists do when fiction writers reflect and translate reality so effectively? What beckons?


"Forgetting" by Alex Falco via Toonpool.
Posted by Joe Bonomo at 6:25 PM

Good stuff, Joe. Of course I am having a hard time getting past the implications of the memory research for memoirists: writing about key events, turning points, usually means conflict and pain, and writing may make one's emotional health worse. I think this could be true even as I also believe, with many other memoirists, that writing about something tends to move the memory onto the page.