A decade or so ago around the time of the Elvis Presley's birthday- and death-anniversaries, The Movie Channel would run marathons of The King's movies, more often than they do now, it seems. A few years back Amy and I enjoyed  Blue Hawaii with several drinks of the same name. It was, of course, a blast, and so we sat for a few days worth of Elvis movies with pitchers of industrial-strength Blue Hawaii's. The fun morphed into something strange: on our fifth or so flick—I think it was Kissin' Cousins or Easy Come, Easy Go, or quite possibly it was Paradise, Hawaiian Style—the obvious awfulness of the movies stopped being fun, stopped being fun to make fun of, and became excruciating. I don't know that I was fully prepared for the lurch from innocence to guilt. With each movie, Elvis looked more and more despondent; the plot twists grew more and more laughable and implausible; developments in the third act weren't merely odd, they seemed imported from another movie; the dreadful songs, never organic to plot, sprang up in increasingly ludicrous situations. By the end of our mini festival, Elvis looked to us not just bored and embarrassed, but angry. At one point, we realized that every third song in the mid-60s movies were about snacks and snacking. In one movie, the title of which is lost in the sad blur, a young woman said to Elvis, "I don't think I can take the strain." Gazing unhappily at Elvis's stretched polyester slacks, Amy turned to me and muttered, "I don't think his pants can take the strain." The treacly blue drinks in our hands were tasting more and more like alcoholic manifestations of wretchedness. Our silliness had moved beyond irony to something else, something darker and revelatory, that feeling just after nervous laughter. I don't know that I've recovered. This was many years ago. 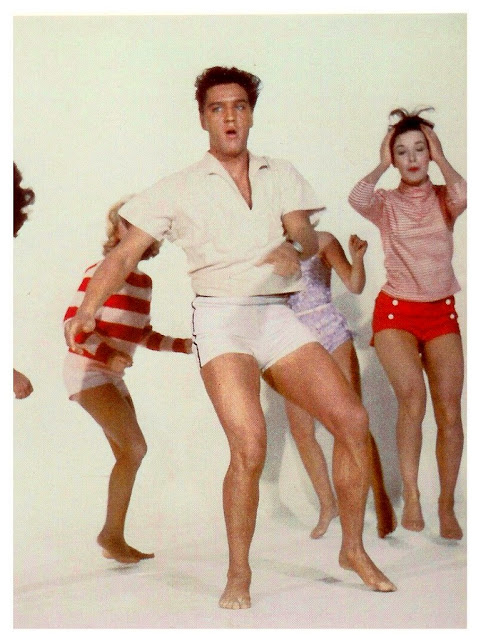