Marina Abramović, Giving Us Ourselves 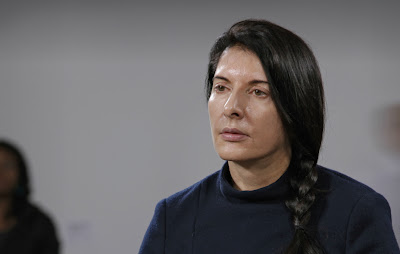 I'm late to Marina Abramović's The Artist Is Present, a performance piece that ran at MOMA two years ago. HBO's new documentary renewed my interest in this amazing work of art, and in the artist herself who's made a lengthy, dynamic career out of testing the physical, mental, and emotional limitations of the human body. If you paid any attention to mainstream media arts coverage the last couple of years, you know what Abramović accomplished in this piece: for nearly three months, wearing alternately a blue, red, or white long gown, she sat in a hardback chair in a spacious MOMA gallery facing another chair where an individual, out of an endless stream, sat and looked at Abramović as she gazed back. You could sit for as long or as little as you wished (some sat for minutes, others for hours, as the gallery-goers looked on). The effort was monumental, and I think heroic, on Abramović's part: beyond the physical and mental stamina and commitment involved—each day she sat in the chair from the gallery's opening to its close for the duration of the piece—there was a spiritual component that, I think, surprised even Abramović in its intensity.

What was profound about The Artist Is Present was the way Abramović was both present and transparent: her sensibility drove the show, but her generosity turned the lens away from her. This was, I think, a deeply personal, maybe even private, piece for Abramović, but what's moving is to watch the effects that the piece had on the various spectators, many of whom seemed surprised, even startled, by their responses, as evidenced by this "Marina Abramović Made Me Cry" tumblr. Had I attended (let alone made it to the chair; the lines by the end of the performance's run were prohibitively lengthy) I have no idea what my response would've been, but I intuitively understand those who found themselves crying, coming undone. By gently, though through fierce will, keeping her attention on each spectator, Abramović acknowledged each, said, You matter at this moment as person, subject, emotional creature, individual. As is mentioned in the documentary, this humane, deliberate recognition of an ordinary individual's worth has greater currency now given the speed and haste of contemporary life, which spurns the contemplative. The sceptic in me wonders: is this what we need, more recognition that someone is worth something simply because he exists, because she is here? But Abramović's aim seemed less to elevate the individual to unearned status than to slow us down, to remind us of our interior, reflective lives, so often obscured or ignored in 21st Century spectacle and noise.

Who knows what private conversations spectators had with the willing, patient, loving Abramović. I was reminded of E.M. Forster: only connect. Clearly there was communication between spectator and artist, in the profound sense of that word. The quiet gallery, the deliberate lengthening of time, the intimacy of gazing, the eye-contact: in this environment Abramović gave the spectators back to themselves, connected beyond rational language, and I'm certain that many of them were changed following the exchange, perhaps permanently. Who knows what the world looked like to the affected as they turned away, but the world was surely altered. But The Artist Is Present doesn't only concern the attendees and their different engagements with the work. Look at the title of the piece: art is happening here. As I watch Abramović, I see an artist in the process of shaping, of imagining, seeing, reflecting, and being. Aramović becomes not only the artist and her art, but art itself.


Trailer for the HBO documentary

Amazing—I'd missed it. And amazing response by you. It must have been so hard for her to do, so draining; how long could one really concentrate? And to get such different vibes, some disturbed or evil . . . But just looking into a normal face, whatever that is, is an awesome thing—so many cues, meanings to read without benefit or just aid of words.