DOWN AT THE ROCK & ROLL CLUB—When Hives singer Howlin' Pelle Almqvist (Per Almqvist) asked the sold-out crowd at Chicago's Vic Theatre to "make some noise," he added the option of booing. This felt like an important moment in this great, if ragged, show. The Hives' act isn't new any more—this was the second time I'd seen them, and despite some fresh stylish details (top hats and tails, a giant puppet master background), the show was nearly identical to the performance I caught at the Riviera in 2008. This isn’t a complaint as much as it's an observation: the Hives had the crowd in their collective Swedish hand, the twin-guitar riffing, maniacal stage patter, and crowd baiting igniting the venue. Mock-deigning to entertain some jeers, Almqvist seemed to be acknowledging the presence of Hives Pushback; more than once, impatient guys in the crowd yelled for the band to get it going again during the long idle stretches, and the band seemed not quite there: Almqvist's brother and Hives lead guitarist Nicholaus Arson (Niklas Almqvist) was ill, and the set was a bit marred by the several momentum-breaking pauses. At one point Almqvist muttered, "I'm tired," and before dutifully (and predictably) admitting that he was only joking, his eyes betrayed him: he seemed exhausted.

But he and his mates didn't flag for long, and by the end of the hour and a half set the Hives had delivered, again. What saves the band is their twin commitment to spectacle and to requiring that their adoring crowds get down (literally) irony-free. The former celebrates the long tradition of tongue-in-cheek Rock Strutting; the latter is a great accomplishment in the 21st century. Rock and roll is more than a half-century old, and generations of kids have grown up suspicious of its buoyancy and its corny promises. The Hives say (in their remarkably good English): You will have fun, as unselfconsciously as you can, after you Check In on your iPhone. The Hives' best songs—rocking, melodic, hooky, and anthemic—and super-tight ensemble playing, and game-playing, blast through Irony, a sonic reminder that rock and roll is fun, and that spectacle and hoarse, trite, call-and-response chanting and raised fists can be enjoyed without requisite, prickly skepticism. I'm not suggesting that Almqvist parades on the stage without a sense of irony; it's just that he plays with it in such as way that acts out its oft-forgotten origins in joy.

Two-thirds of the way though the show, Almqvist demanded that the crowd sit on the floor. I thought that maybe the folks closest to the stage would oblige; I was near the back, and to my surprise nearly everyone in the crowd around me got down. Soon, the entire venue was on its butt. We were sitting, and later kneeling, on the drink- and sweat-soaked floor of the century-old Vic Theatre, grinning and peering over each other's shoulders as Almqvist alternately baited and praised. The fun was genuine, not smirking, and even a bit surprising, given that surely this is nightly shtick on this tour. This is what I love about the Hives (and a certain other band): stubborn insistence on stupid fun, irony be dammed. Some roll their eyes, some give in. How long the Hives can maintain this effect remains to be seen. Their infrequent dashes through the U.S. will help stoke the flames for those who want to see them again and surrender, smiling, to sonic silliness.

On Belmont Avenue after the show, my ears ringing, I ran into a couple former students. One of them hadn't seen the Hives before, and he dug his first show. "There were a lot of fists in the air," he said, and I couldn't quite gauge the sarcasm-level in the comment. He's a smart guy, and knowledgeable about rock and roll, the kind of fan the Hives want to convert.

I'm not crazy about the Hives' new album, LexHives, though it's growing on me. The band's older material ("Die, All Right," "Try It Again," "Main Offender," "Hate To Say I Told You So," "Tick Tick Boom," etc.) garnered the loudest cheers, and the band seemed to get it. The new songs definitely sound greater live—the band is loud and Arson's and rhythm guitarist Vigilante Carlstroem's (Mikael Karlsson) riffing add real muscle to the new songs' bottom-free sheen. (Watching Arson and Carlstroem manically handle the riffs in "Die, All Right" and "Main Offender," I nearly wept.) "Tick Tick Boom" was the highlight, the sensational riff lifting up the sweaty crowd and keeping us aloft during the band's now-patented stage freeze, a minute or so of stock-still Swedish diorama before explosion. Following the encore, the band took deep stage bows and seemed genuinely gratified with and happy for the Chicago response, the last the band will get for a while (they return in September to the West Coast). Soon it will be back to Sweden. I hope they don't take half a decade to come back. 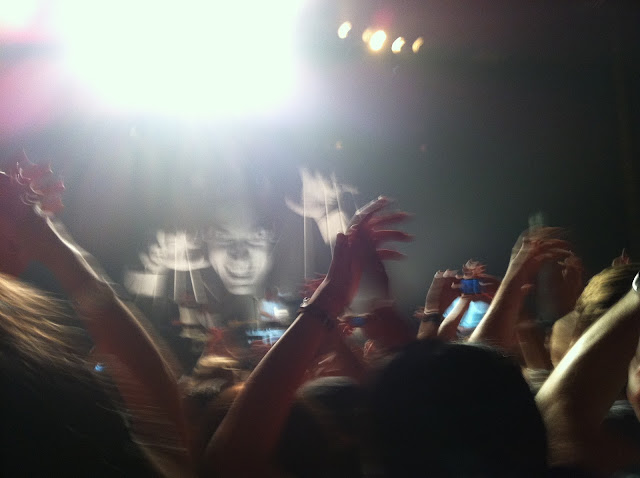 Oh, and I don't have a 22 year-old’s neck anymore. I'm always glad that the Hives make me forget that.
Posted by Joe Bonomo at 11:46 AM

Email ThisBlogThis!Share to TwitterShare to FacebookShare to Pinterest
Labels: chicago, downattherockandrollclub, live shows, rock and roll, the hives, the vic