Going Through and Forgetting 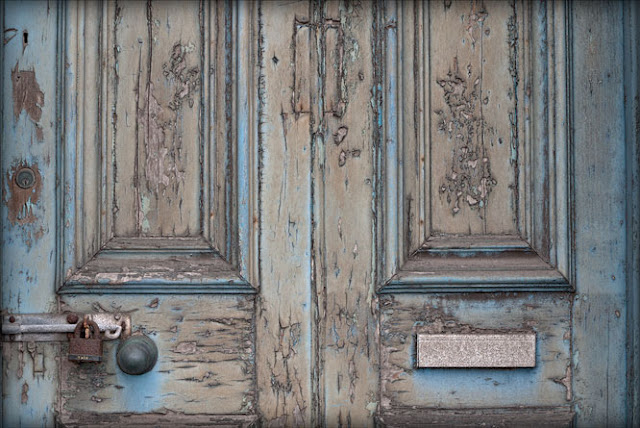 Recently at BPS Research Digest, the "brain and behaviour" blog of the British Psychological Society, I read about a wild discovery: merely walking through a doorway increases forgetting. A study led by Gabriel Radvansky "shows that the simple act of walking through a doorway creates a new memory episode, thereby making it more difficult to recall information pertaining to an experience in the room that's just been left behind."


Dozens of participants used computer keys to navigate through a virtual reality environment presented on a TV screen. The virtual world contained 55 rooms, some large, some small. Small rooms contained one table; large rooms contained two: one at each end. When participants first encountered a table, there was an object on it that they picked up (once carried, objects could no longer be seen). At the next table, they deposited the object they were carrying at one end and picked up a new object at the other. And on the participants went. Frequent tests of memory came either on entering a new room through an open doorway, or after crossing halfway through a large room. An object was named on-screen and the participants had to recall if it was either the object they were currently carrying or the one they'd just set down.

The key finding is that memory performance was poorer after travelling through an open doorway, compared with covering the same distance within the same room. "Walking through doorways serves as an event boundary, thereby initiating the updating of one's event model [i.e. the creation of a new episode in memory]" the researchers said.

Concerned that these results might have occurred as a result of the simplistic nature of virtual reality, Radvansky and his team conducted a second study employing actual physical rooms with objects in them. "Participants passed through this real environment picking up and depositing objects as they went, and again their memory was tested occasionally for what they were carrying (hidden from view in a box) or had most recently deposited. The effect of doorways was replicated. Participants were more likely to make memory errors after they'd passed through a doorway than after they'd travelled the same distance in a single room." Wishing to discount the memory-enhancing effect of context—i.e. "the basic idea being that we find it easier to recall memories in the context that we first stored them"—


Radvansky and his team tested this possibility with a virtual reality study in which memory was probed after passing through a doorway into a second room, passing through two doorways into a third unfamiliar room, or through two doorways back to the original room—the one where they'd first encountered the relevant objects. Performance was no better when back in the original room compared with being tested in the second room, thus undermining the idea that this is all about context effects on memory. Performance was worst of all when in the third, unfamiliar room, supporting the account based on new memory episodes being created on entering each new area.

This is fascinating. What I find especially interesting is the door as metaphor, something figurative that is empirically vetted by these experiments. If metaphor is a carrying over, a bridge between the rational and the irrational, a study like this suggests that tat bridge is a sturdy one. Think of the door and its many associations: through a doorway I enter, depart, seek shelter, find shelter, hide, discover, expect comfort, experience surprise, shed a persona, adopt a persona. All of these and more we associate with the doorway, the dividing line between inside and out, private and personal. It makes sense to me that when we go through a door, a page turns, narratively speaking, in our imaginations and in our memory. We feel that a new section, a chapter, had begun, or we revise the rooms, the chapters, we were in earlier. Joyce Carol Oates understood this as she imagined poor Connie at the end of "Where Are You Going, Where Have You Been." Connie's standing at a literal threshold as she's preyed upon by Arnold Friend. In the story's final moments, before she submits to Friend, Connie's poised at a doorway, behind her her flimsy, inessential house, in front of her "so much land that Connie had never seen before and did not recognize except to know that she was going to it." Richard Rodriguez, too, at the end of Hunger of Memory, recognizes the power of the doorway: Rodriguez is leaving his parents' home after a holiday dinner, and at the door gives his father's coat to him. "In that instant," he writes, "I feel the thinness of his arms. He turns. He asks if I am going home now too. It is, I realize, the only thing he has said to me all evening." Framed in a doorway, Rodriguez, as all great autobiographers can do, recognizes a silhouette of himself in an image of lasting value, at a door through which he departs and thus everything behind him changes, and is partially and permanently lost to memory.

A painting's frame is a door, too, through which we enter and through which we depart to re-enter the world, maybe changed slightly, having forgotten for a moment where we were. What we remember of the world in which we were standing has been affected, or more likely, begins again.

Of course, John Ford got it, too: 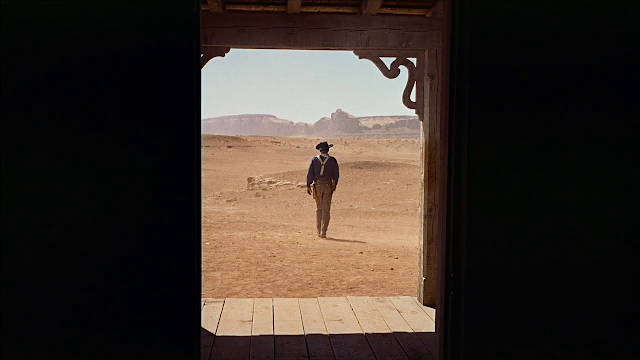 What's your favorite door scene in a book, movie, or song?


Image of door via ePhotoZine.
Posted by Joe Bonomo at 5:52 PM