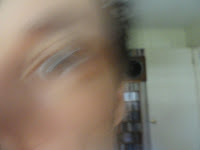 The block party behind our house would fade into dusk as if stage lights were being lowered, all that was left were gray silhouettes of neighbors, bikes, grills, and parked cars, the dart-like movement of the kids and the lumbering of parents cut-outs against the receding dark out of which something else now would arise, the unnamed smells of Scotch and Bourbon, car headlights coming on one-by-one to illuminate neighbors sighing and sagging and laughing into their lawn chairs, the tinkle of ice and lowered chuckles a new timbre against the careening Big Wheels and girls' laughter, the booze a kind of foreign oil moving across the tide of my childhood, and so I'd sniff, curious, something added to the strange odors of grown-ups, a smell that seemed to come with the dark and the spent, long afternoons, food eaten, stories swapped, a new, exotic tenor out there in the suburban air, a strange current, beguiling, not mine, humming through the next few years as I grew unafraid of its wattage, plugging in, a decade later winding up with my buddies in the woods behind Kemp Mill Shopping Center chasing Cutty Sark with orange soda that we bought at Giant Foods, that same strangeness, now vivid and joyous and cut with mayhem, descending with a different dusk—into which I awoke, later, wrapped around my ten-speed bike in the county strip along Arcola Avenue, my feet twisted through the spokes, a dog barking somewhere, lights in a strange house coming on, my older brother staring down at me, the streetlight behind him, his car idling, my mom waiting a half mile away on the front porch, blurry.
Posted by Joe Bonomo at 10:59 AM