Riotous Excursions at the Public Theater 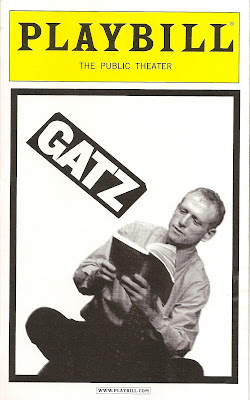 A decade or so ago when I was staying in New York City for a month, The New York Times providentially was running in its Sunday editions installments of The Great Gatsby. "The wait between reading each chapter," I wrote in Defunct, "allowed Jay and Nick and Daisy, whom I already knew absurdly well, to move again inside my imagination, and against the backdrop of the Brooklyn and Manhattan streets I was walking everyday, with new vividness.  Best of all, Fitzgerald’s story felt as if it were unfolding in real time.  Each Sunday, after contemplative absence, I caught up with the characters, I reinvested." Recently I experienced the novel in an even more temporally interesting way: Amy and I saw the Elevator Repair Service's production of Gatz at the Public Theater in Manhattan, happy to catch the last performance of this extended, acclaimed run. Gatz is a staged reading of Fitzgerald's classic novel, and what was promised to be a six-hour event was, all told, with intermissions and a dinner break, an eight-and-a-half hour affair. Just a day at the office with Nick and Jay.

The 9-5 scope of the reading is uncannily appropriate, as Gatz takes place in a drab, nondescript office that provides an indeterminate service, evocative of the early 1990s with stiff-backed chairs, bulky desktop computers, and industrial-gray-metal tables and towering, box-stuffed shelves casting a Roethke-like dolor to the scene. The clunky computer, it turns out, is on the fritz. Distracted, our pale employee (played by Scott Shepherd) notices a dog-eared copy of The Great Gatsby propped up in his Rolodex, pulls the book out and, bored but curious, starts reading aloud, half to himself, half to the audience. Sentence by sentence, Shepherd works his way through Nick Carraway's opening monologue, in the process becoming Carraway himself, a kind of office-performer who's slowly vanishing into the book that absorbs him. Through director John Collins' brilliant staging, the reader's office colleagues—a mousy brunette, a swaggering manger-type, a zaftig secretary, the unassuming IT guy—slowly become characters from the novel. The seamless move from a man reading aloud from a book to a man transformed, and transported, by that book is Gatz's genius stroke: as in any immersion in great art, one's setting becomes immaterial, replaced by the imagination's  broader and more substantial navigating of the interior realities the work of art creates. It was not an accident that "Nick" begins reading from the novel only after his computer malfunctions: forcibly removed from our digital realms, we can more fully embrace the deeper, more textured experience of narrative art. Yes, Gatz is "about" The Great Gatsby—it is a word-for-word rendition—but it's really about the power (and value) of narrative and the imagination. This performance revived and transformed my appreciation for Fitzgerald's novel.

Gatz is also theater. Collins and Associate Director Steve Bodow morph a drab office into 1920s East and West Egg and points Manhattan by emphasizing actors' gestures and body language over scene and costume. The cheap office couch becomes plush furniture in Daisy Buchanan's home in one scene, a pool in another, and a coffin by the end. Office chairs are spun around the stage and repurposed, serving as car seats and fashionable, overstuffed lounging chairs and the sad thin piece that props up a grieving George Wilson in his greasy gas station in the Valley of Ashes. In a remarkable scene—the over-the-top party at a Manhattan hotel that concludes with Tom Buchanan breaking Myrtle Wilson's nose—the directors and cast recreate a chaotic bacchanal by continuously throwing into the air and around the set (which is, remember, a business office) fistfuls of memos and invoices and receipts, the meaningless business correspondence fluttering and landing softly like nothing less than confetti and streamers dropped by gay-seeking partiers, but the result is a gargantuan mess. These kinds of narrative/thematic transformations are enthralling, and the movements among them create a momentum of spectacle that corresponds with the novel's air-tight, suspenseful narrative.

Near the end of the performance, sitting at his desk, Shepperd appears to lose his place in the novel, and yet you notice that he's still reading. Eventually, he stops the charade and closes the book. You realize that he'd memorized the entire novel, that the book was technically a prop in his hands all along. I'd been prepared for this—the fact that the actor had committed the novel to memory buzzily preceded the show's run, and is even listed in the production's FAQ—yet his gradual move away from the novel toward pure recitation was still startling, absurdly impressive, and strengthened Gatz's acknowledgement that Fitzgerald's prose is to be savored and read as sensual language thickened with ideas and essaying into the human condition. Shepperd's take on the powerful closing paragraphs of the book was ideally pitched: yes, I knew these lines, but hearing them in the context of an ordinary office setting temporarily brought to life by the imagination and by lyric language—by an artful rendering of the world—only made these lines, their evocation of hope and loss, greater and more poignant. If art seeks to return us to the world refreshed, as poet A.R. Aamons suggests, than Gatz succeeds; it also returns me to The Great Gatsby refreshed.


Image of cast of Gatz via Elevator Repair Service
Posted by Joe Bonomo at 1:14 PM

i just got only one thing to say about this
WOW!!!!
It was really an awesome experience.

How cool—I envy your getting to see it. And what an interesting and evocative essay/post, wow. Some who were forced to read the novel are going to hate it; its academic ranking will go up and down. But it's one of those works of art that some of us just love and can't be persuaded to take for granted its poetic beauty.