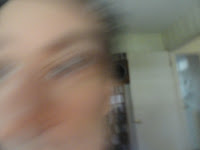 Steady rain made the station wagon feel like a submarine, how many leagues under water, as we were on the way to piano lesson at Mrs. P's, a drive through slick winding roads after school let out, through and into neighborhoods I'd only see for these lessons, homes I wouldn't trick-or-treat at, homes which windows I wouldn't glance into while walking home from school, guessing at the lives inside but mostly shuddering at the infinity of it all, that home like mine that home like mine that home like mine until it became too much, too heavy, this pre-knowledge that the impossibly unknowable stuff going on inside my own home were reproduced in their unknowableness in other homes, every home, so I'd slide further down in the forest green seat as my mom drove us to the lesson when I'd rather be home in front of the TV or down in the basement with a paperback, but resolutely the submarine made its way where what awaited me was a glimpse of Mrs. P's husband in the hallway at the top of carpeted stairs, where were their kids? the exotic smells so strange and the weighty sense that this is a home, too, like mine and not like mine, and when my fingers later rested on Middle C and I tapped out "Happy Birthday" or Three Blind Mice" the focus on something helped, Mrs. P standing over my shoulder, the rain outside falling calmly now, a soft curtain that if only for an hour or so drew together all of these odd, unfamiliar homes.
Posted by Joe Bonomo at 10:30 AM