The Alphabet, Punk through 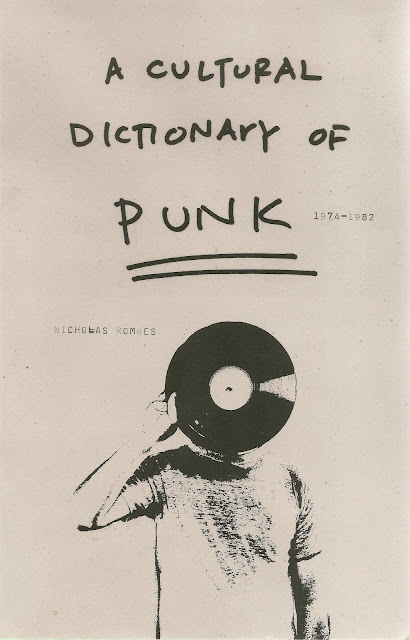 I've arrived late to Nicholas Rombes's A Cultural Dictionary of Punk: 1974-1982, a smart, sweeping, ambitious piecing-together of punk culture and history in the form of alphabetical entries. Continuum published the book three years ago; Rombes, a Professor of English at University of Detroit Mercy, had previously written two books on film and a book for the 33 1/3 Series on the Ramones' debut album (disclosure: Rombes and I share a publisher and editor). Wide-ranging in his vision, he takes a lively approach in A Cultural Dictionary of Punk: since punk is by its nature unstable and resistant to received forms, a strictly chronological history might reflect the subject less vitally than a kind of free-form, associative gathering of seemingly unrelated ideas, in essence a repudiation of traditional history. The result is fun, spiky, surprising, and edifying.

Rombes sifts through an impressive storehouse of artifacts, texts, documents, activities, and movements, from songs and albums to film, advertisements, television, novels, self-help manuals, poems, essays, nostalgia, art aesthetics, rock and film criticism, politics, 'zines, and recorded/recordable media. What interests him is how and where the punk ethos has been variously defined in different quarters, creating echoes among disparate events, people, and places. If Rombes' modus operandi sounds a lot like Greil Marcus's, it differs in a significant way: Rombes writes much more about the Manhattan punk scene of the late-1970s than Marcus ever did; Marcus disdained that scene. (I was surprised by Marcus's repudiation of the New York punk scene; he's right to detect a cartoonish quality there that, save for the Dickies and a couple of other bands, is lacking in earnest UK and California punk, but if Suicide had been a Berkley or a San Francisco band, I'm convinced that Marcus would be praising their insurgent punk sensibility to this day.) Rombes is also a bit of a traditionalist, arguing that hardcore in the later DC but especially California permutations over-politicized punk and introduced distasteful elements of nihilism and ugliness. For Rombes, the Ramones and the Sex Pistols remain the paragons of punk style and ethos. Celebrated rock critics Lester Bangs, Dave Marsh, Richard Meltzer, and the less heralded such as Charlotte Pressler, and John Rockwell of The New York Times, are lauded. Most of the artists and albums you'd expect to be in here are here.

But Rombes is less interested in establishing and arguing for pecking order than he is in dismantling order, and searching for the many, sometimes surprising appearances of what he adroitly calls the "punk imagination."  He looks at early appearances of the word "punk" (most interestingly "whistle punk," a term used in early 20th-century logging circles—and who knew that New York City Mayor Firoello Henry La Guardia had a copyright on the word "punk" in the 1930's?), discusses writers not associated with punk such as Barry Hannah, John Ashbery, Joan Didion, and Benjamin Spock (!) as exhibiting dissenting flavor or social critiques in their work that indirectly reflects or influenced punk, and discusses the violence and disorder of the Patty Hearst abduction as a kind of stand-in for punk before punk had to happen. Provocatively, Rombes argues that Ronald Reagan and punk, usually described as mutually exclusive rivalries, had many more correspondences than not:


During the early to mid-1980s, Reagan provided a ready target for anybody who felt alienated from "society." And nostalgia cannot be measured solely in economic or social-policy terms. What matters and what is worth saying is that Reagan had things in common with the punk imagination:a return to basics; a rejection of the excesses of the counterculture and the hippies; a mastery of performance; a do-it-yourself work ethic.... The restrained, minimalist cool of Talking Heads and the Ramones was a version of the Velvet Underground stripped free of excess and commandeered down to the pinprick simplicity that wold be the hallmark of Ronald Reagan's speeches.

Rombes concludes the Reagan entry this way: "Reagan's 'return to order' shared so much with punk—which by and large cast him as the Enemy Father—that it will likely be decades before it becomes acceptable to draw this comparison."

As his title indicates, Rombes brackets punk in a particular time frame; he's generally cool to postpunk. From his entry on Sonic Youth: "You want to understand—you want to be on the side of Sonic Youth, whose name alone should redeem a handful of dull albums—and you strain to listen for even a hard of pleasure here, in these arid songs made, it seems to you, by people who hate music....if I love any shard of this music, does that mean that I'm missing the point? Or is the joke on me?" No Wave artists and a few later 1980s hardcore bands receive a similar critical shoulder-shrug from Rombes, who reveals himself by the end of this book as a lover of music that surprises without abandoning the old-fashioned pleasure principles of song construction. Unsurprisingly, the Dictators are heralded here, as an influential group that drew from both punk instincts and an unabashed love for popular culture and pop music craft, however snottily deconstructed.

Rombes has written a lively, powerful, important book. A Cultural Dictionary of Punk belongs on the shelf with Jon Savage's England's Dreaming, Greil Marcus's In the Fascist Bathroom, and Clinton Heylin's From the Velvets to the Voidoids, other books that smartly excavate the chaos of late 1970s/early 1980s punk, and its precedents and aftermath.

Here is an excerpt from A Cultural Dictionary of Punk at Berfrois, covering Spiro Agnew and "Paint It, Black," among other topics.
Posted by Joe Bonomo at 10:42 AM