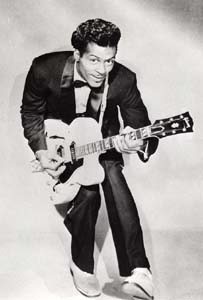 How many hundreds of times have I heard Chuck Berry songs? At home, in the car, at parties, in the bars, on TV, on the radio, in my head, in any number of a thousand songs that rip off him and his band's 1950s high water cuts. Berry is so monolithic, so legendary, such the prime mover that he barely exists as a flesh and blood man (his low-profile adds to the mystique). His songs aren't really songs anymore, they're blueprints in an archaeological museum; less words, melody, and performance on analog tape than Platonic models. Sheer repetition coupled with mythology have rendered Charles Edward Anderson Berry inhuman, his songs rumors of a man who once existed, or was invented, it's unclear.

How great when a song can still surprise. Tonight Ame and I were driving, listening to a roots show on local public radio, when "Johnny B. Goode" came on. Because I hadn't been looking for it on my Chess box, because I wasn't already bored by its oft-told stories before it played, because my mind was elsewhere (as it turns out, still enjoying the close of the Rolling Stones' "Country Honk," which preceded Berry in the set), because I wasn't burdened with solemn appreciation for the Father, because I didn't start with the reference books, because this wasn't a Sweatin' To The Oldies infomercial at 3 am after last call, because with all great rock and roll we catch up to it a moment after it begins, led first by the rush of blood, then the heart, then recognition in the form of a Yes! and a smile and a shared glance with a friend or a stranger, then a lurch to turn UP the song—none of which we can articulate in language, with sentences, until another moment or two passes—because of this I heard "Johnny B. Goode" for the first time today. Then it was over. Actually, it was over before Chuck got to his first solo, the recognizable notes and style already descending into formula, routine, ancient black and white, archetype, cliché, Happy Days. But for that minute, a bell never sounded so sweetly rung by human hands.
Posted by Joe Bonomo at 8:10 PM