When I read essays written by my students in which they explore episodes from their childhood and adolescence, I often find myself imagining them as kids during the era when I was a kid, archetypes helplessly bounding across the decades, meeting shyly on playgrounds and back yards. This is an unconscious transformation of their past into mine, and perhaps it's irresponsible—but it simply happens, one era's transparency laid on top of another era's. We're all kids. Then, a glaringly of-the-period reference pops up—a television show, a popular toy, a Top 40 song—that reminds me that this person was 12 only a decade ago. Occasionally a student will embed in the essay a jpg of a parent or childhood friend, and there's that cognitive dissonance again: Eighties, and increasingly Nineties, hair and fashion in all of their glory, as overwhelmingly nostalgic or cringe-worthy for my student as my era's images are for me. 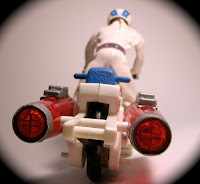 This isn't news, but still I'm interested in why I import into the further past a dramatizing or reflection of a moment from, say, 2000, or 1998. Lazy reading? I hope note. This must have something to so with the way narrative art connects personal moments across time in a chain of collective remembering. My students, essaying themselves and versions of themselves against their (relatively) far past, become silhouettes, pushing back against nostalgia and scepticism and wordlessness as any human has done across centuries. Just yesterday in workshop a student wrote about visiting woods that had been precious to her when she was a child, and the present-tense grief she felt upon discovering that the wide creek she'd labored to heroically leap over as a girl is but a narrow trickle she can easily step over now. The creek didn't change shape; she did. In making this melancholy discovery, she no longer was a woman remembering a girl ten or so years ago, but a human momentarily transcending her origins in time and place. I have no idea if this student's draft will become better, or bigger, but the impulse behind it already places my student in a long tradition of remembering versus writing—regardless of what 2000's TV show's tweener star might have been lovingly emblazoned on a backpack she clutched fearfully as she jumped the creek, or failed to.

If I teach long enough I'll encounter drafts with references to the writers owning cell phones at age five and growing up having documented the world—and been documented—via social networking and  24/7 video phones. How will this affect their writing, their ability to transcend their time and place through language and imagination? Do essays move forward fueled by period details, or are they weighed down by them? If, after Wallace Stevens, an ordinary object slightly turned becomes a metaphor of that object, then certainly a slightly turned Cabbage Patch Kid or Furby has the same potential for talismanic transport as a lava lamp or a Major Matt Mason. So the problem can't be in decade-specific details, but in the way they stubbornly fail to lift out of their context into the ether where we live and read unburdened by birth dates.

The burden rests, as they all do, on the essayist, not on the world. Chatty Cathy, meet Teenage Ninja Mutant Turtle. What do you have to talk about?


Edited image of Evil Knievel Super Jet Cycle via Yesterville.
Posted by Joe Bonomo at 11:56 AM

I really like your observation that essays are limited when they fail to transcend their local context, and it's a really interesting question you pose, whether or not our constant self-surveillance and running commentary hinder this ability. I think it's pretty clear that people are becoming more burdened with the details of the present. On facebook, you can see a constant stream of minute autobiographical details in pictures and status updates that each person felt was important to share for whatever reason, updates on everything from the new baby to what's for lunch. Each moment in the day becomes a potential status update. But it’s also interesting to consider that each person has reasons for wanting to share some moments and not others, even if those people making those posts might not reflect on why they’re doing so. There’s some meaning lurking behind the compulsion to document and share. And it’s good to keep in mind that we’re still in the early stages of the self-surveillance era. Maybe we’re like a child who’s been given a new toy. Why are we so fascinated by this toy, and what will happen when its novelty eventually wears off? What uses will we find for it?