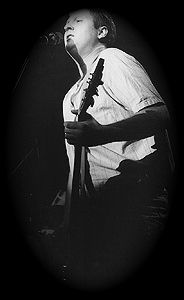 maelstrom not being my modus operandi in the 1980s, raised as I was on the Monkees and the "Red and Blue" albums, tuned as I was to the Beatlesesque, to hooks-per-minute, to T.A.M.I. R&B, to Weasel on WHFS 102.3 FM carrying the torch of 1960s AM radio into the alternative decade, noise being for me something I knew all too well internally as a kind of obsessive litany of voices, of personas watching me watching me watch myself, seeking instead through rock and roll a way to lift myself out of my lousy self, a self insisting on analysis and over thinking, seeking in rock and roll grins and self-mockery and good times against the earnestness I heard in hardcore and post-hardcore, and let's face it, the fear I felt in the scowling face of that music, chagrined to this day that I turned down an invitation from the quiet girl who lived above the "Zoo bar" on Connecticut Avenue to see the Dead Kennedy's, turned her down out of silliness, couldn't let go, because as a punk she scared me, not as a "punk," but as a woman who was willing to hear more than I was willing to hear in noise and in formlessness, who stood a few feet closer to chaos, admitting to darkness that I indulged in the books I read and the movies I watched and the bad poetry I wrote, but darkness that I avoided in amplification, preferring Mod to Rocker, skinny tie to Doc Marten boots, the Slickee Boys to Minor Threat, and so I avoided the roar, and when I listen to Hüsker Dü now and regret what I missed—Zen Arcade and New Day Rising, the transcendent shows, the camaraderie among folks who in my puniness unnerved me—I know that I would have had to have been a different person then, a kid willing to fall into the limitless darkness of a mouth roaring, letting go of pop songs and formalism, of mid-60s hooks and riffs and their modest, three-button suit revolts, I would have had to have let go, and when I did and went to see Hüsker Dü at the Psychedelly in Bethesda in 1984, my fears were founded, though played off coolly, as I stood as near as I would have ever let myself to the roar, the loudest show I'd seen, loud in Yes to the anarchic and disorder as well as pure wattage and sound, as Mould and Grant stomped and screamed and required that I look where they're looking, too, my ears ringing and my face red, and when the kid jumped up onstage to sing along to a song and forgot the words and stood next to Mould looking like a lost kid, humiliated, the complicated look on his face was a relief to me, something human, something behind a pose, a kindness, actually, betrothed me from somewhere, so that if I had let go and gone down into the frightening roar this kid and I might've shared a moment of understanding, or vulnerability, something, had I let go.


Photo of Bob Mould via artrocity.
Posted by Joe Bonomo at 5:21 PM

Email ThisBlogThis!Share to TwitterShare to FacebookShare to Pinterest
Labels: Hüsker Dü, memory, rock and roll, the past

And yes, I was that kid. Bless.