"I Never Wore Earplugs. That Would Have Been Cheating." 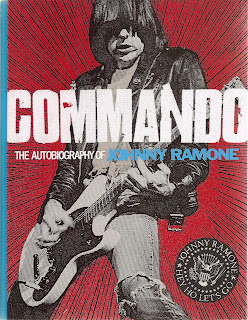 Johnny Ramone's autobiography Commando is exactly what I expected. If you've watched any of the early-2000s interviews with Ramone, you know what you'll get here: Johnny's version in Johnny's voice. There is in Commando, as there was in John Cummings' personality, excessive order, and more than a little meanness, and, also like him, there is little stylistic excess. I never met him; I'm friendly with many people who knew him personally and so I'm familiar with his reputation as a Right Wing taskmaster with little patience and a fascistic control of his band's finances and image. In Commando his voice is dry and forthright (you can hear the Borough accent), lacking in self-interrogation. Orwell famously said, "An autobiography is only to be trusted when it reveals something disgraceful. A man who gives a good account of himself is probably lying, since any life when viewed from the inside is simply a series of defeats." Ramone seems to have heard Orwell, however distantly. He doesn't spare himself the occasional self-criticism (granted, "Maybe it was a little out of character for me" is about as revealing as he gets) and he's not shy about exposing some bad decisions and poor judgement, especially in his reckless, aimless adolescence. Commando is hardly Ramone's end-of-life mea culpa, an opportunity to sensitively, unsparingly essay his life for telling contradictions and graphic self-awareness. Essentially, what governs Commando is a late-life shrug: we did what we did as best we could.

I'm a little surprised at—and a bit uneasy with—how appealing I find Ramone's voice. I think that I would've loved talking to him; we could have discussed baseball and rock and roll all night long, and when the subject turned to politics I would've dodged the issues on which I knew we wouldn't agree. But I would certainly have known where he stood. Our shared ground might have been broader than I would've guessed. On rock and roll's joys, myths, and promises, Ramone is great. "I’ve always thought you’re better off playing shorter," he declared flatly.


Ramones songs were basically structured the same as regular songs, but played fast, so they became short. When I saw the Beatles at Shea Stadium, they played a half-hour show. I figured that if the Beatles played a half-hour at Shea Stadium, the Ramones should only do about fifteen minutes. You get in your best material, and leave them wanting more. I don’t think anyone should play for more than an hour.

That's a pretty brilliant ethos, and served the Ramones, and rock and roll, well. Touchingly (ridiculously), Ramone genuinely felt that his band, along with the Clash, was going to become huge, epochal stars and were going to change rock and roll in a revolutionary and permanent way, become the Beatles to the Clash's Rolling Stones. When he admitted to himself that this wasn't going to happen—around the time of End of the Century's commercial disappointment in 1980—life in the Ramones became "a job," the place where Ramone went to work, didn't feel the need to hang socially with his fellow employees (Dee Dee, Joey, etc.), and came home, punching the clock like any blue-collar guy, like his hard-working father, a bar owner and, later, Union rep. In an early 20th Century, self-made-man, charming kind of way, Ramone had a goal: when he had a million in the bank, he was going to hang up his Mosrite and retire in sunny Los Angeles. In 1996, that's precisely what he did (acknowledging that he made considerably more money after retirement through Ramones merchandising).

There are some great nuggets in the book: Ramone's love of rock and roll was ignited by the jukebox at the scruffy bar owned by his dad (Johnny credits "the nameless guy who changed the records"); his ticket stubs from mid-60s Stones and Beatles shows (including Shea Stadium in 1965); Johnny's flipping the bird on the Ramones' first album cover—for decades he was disappointed that so few people appreciated that gesture (distracted by the legendary iconography, I'd never noticed); in 1978 before Elvis Costello performed on, and infamously changed songs during, Saturday Night Live, the Ramones had been asked to replace the Sex Pistols in the slot; they'd refused, via Johnny ("We don't substitute for anybody"); the band turning their backs on the jacket of their last album, 1995's ¡Adiós Amigos!, to better shield their fans from their lined, 40-something faces. Johnny Ramone's story—a borough-bred misfit and juvee, lost after failing at military school, walking hazily through years of drug use and petty crimes, experiencing an epiphany one afternoon on the streets of Forrest Hills ("I don't know what it was, God maybe, but it wasn't something I had heard before") after which he cleaned up, devoted himself to crappy construction jobs, assuming his lot in life, meets up with like-minded rock and roll nuts, gets let go from his Union-protected job via Affirmative Action (so goes the tale), revs up his dormant rebellious, jingoistic side, starts a rock and roll band, butts head with authority, wins, loses, goes to work for twenty years, and retires a millionaire—is utterly, amusingly, American. Of the final fade:


I knew that someday it had to end. What a great job, what great fans we had. I mean, there are people who really have to work for a living. They work in coal mines; they sweep streets; they collect garbage. Being in a band was taxing on the mind because of all the travel, and there were certain pressures, but it was nothing like real work that most people do. I'm sure baseball is more grueling. I was very lucky.

Ramone's personal creed—his job was to work hard with diligence, and to capitalize on luck—didn't leave much room for dissent. He's frankly exasperated with Joey Ramone's life-long Obsessive Compulsive Disorder ("There is no way for me to understand this affliction....I saw it as being irresponsible and unorganized"), Dee Dee's erratic drug use and personality, and the European lifestyle in general. (One of the funniest photos in the book is of a sourly glum Ramone parked out front of a hotel in France, the look on his face saying, there's no baseball, there are no ice cubes, the shower's over the toilet....) It appears that Johnny Ramone rarely took side glances as he lived: everything he wanted, cared for, was straight ahead in the form of tangible, practical goals: a dollar figure in the bank, Republican national might, mercifully short photo sessions, milk and cookies after a show and ESPN Sports Center in the hotel room that night. Anyone who threatened to pull him away from his goal-obsessed march—band members, messy romance, drug abuse, personal sloppiness, hippies, producers—were merely, barely, tolerated. He had work to do.

Judging from people I've spoken with who knew Ramone, this stubbornness and narrow-mindedness could be wearing, and I'm putting that mildly. Confined between book covers, his personality is appealing, if odious at times. Entertainingly predictable. I laughed a lot—you know what you're getting, and what's coming, with Ramone. Many have said that if Ramone hadn't been the whip-cracking, unyielding force that he was, the Ramones might not have lasted beyond 1978. And, yes, rock and roll would have been lesser because of that. Unless, of course, you agree with Johnny himself, who honestly admits that most Ramones albums in the 1980s and 1990s were sub par, and that they were looking embarrassingly old by the end.

Commando's final chapter is difficult to read: Ramone is essentially narrating his own death, detailing trips to cancer doctors, radiation treatment, genuine suffering and distress, with panicked and wounded cracks challenging his stoic facade. ("By the time you are reading this book, I might not be here," he writes. Ramone died in 2004.) His philosophy of life is not going to be fair, it's going to be life appears to have buoyed him up at the end, that and the support of his wife Linda and their many friends. The book ends, appropriately, with lists. It is revealing that Johnny Ramone's personality can be evoked by a list—he was unsubtle, highly organized, and driven by ranked priorities:

And this: no one looked better with a guitar than Johnny Ramone. 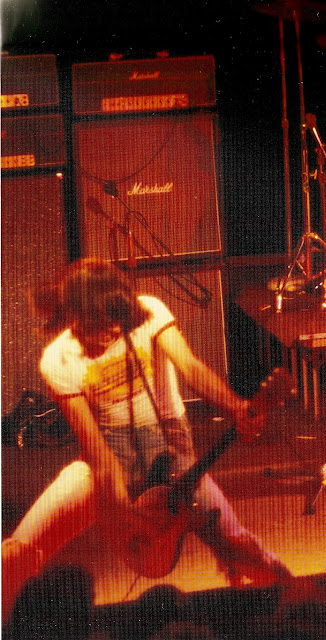