"Trying to take one day at a time": Margaret Sartor's diaries 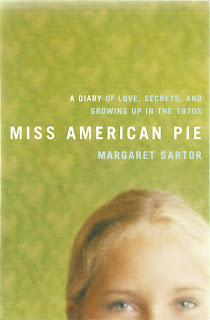 "I remember my mother claiming, loudly and usually while surveying my room from my doorway (in blatant violation of the 'do not disturb or die' sign which no one seemed to take seriously and I was powerless to enforce), that my bedroom smelled, and I suppose it did," Margaret Sartor writes in her introduction to Miss American Pie: A Diary of Love, Secrets, and Growing Up in the 1970s. "The faint odors of oiled leather tack, potpourri, paints, candy bars, skin lotion, dog hair, and dirty clothes were all of my own making, and I thought my room was an OK place to be." She adds, "On reflection,


I think the sediment of memory must resemble that room, and in my initial reading of the diaries there were times that I became aware of those long undistributed layers of sensory information, images I didn't know I could conjure, feelings I didn't know I still felt. Reading an entry, such as, "Went skiing on the bayou. Mitch kept flirting with me and I kept liking it." and an entire afternoon's experience would suddenly be revealed to me in full: the appalling heat, the relief of the breeze when the boat was in motion, Mitch's extremely short cutoffs and the fact that he wore no underwear. Scratch the surface and the past was there. Heartaches mostly. And the buried hurts and the humiliations that hurt and humiliated me all over again.

The diary to which Sartor refers is the (mostly) daily record she kept while in junior and high schools in the early- and mid-1970s, and which makes up the bulk of Miss American Pie, published in 2006. I loved this book for Sartor's affecting, searching teen voice, for its evocative details and its open window on a lost era, in Sartor's case, life in the town of Monroe, Louisiana, where Sartor was born and raised. As a voice-driven, coming-of-age narrative, the book's a great read; as autobiography, it troubles me, or at least has me thinking. Sartor culled material from her letters and notebooks as well as her private diaries, and claims that her only authorial shaping was changing names and rearranging "some sequences and details...not in an attempt to obscure the facts, but to better reveal them." I read Miss American Pie in the wake of the John D'Agata controversy, and Sartor's comments interest me. Moving around things—details, events, facts—can divulge rather than disguise, Sartor claims. She leaves it at that (this statement appears in a brief note at the start of the book) but I wish she'd explored it a little more. As it is, her book reads simply as a reproduced diary, brief, often single-sentence entries chronologically moving from 1972 to 1977. Sartor's writing captures beautifully the chaos and melodrama of teenagedom, when things can spiral uncontrollably—body, mind, and emotions—and today's end-of-the-world crises feel silly in the face of tomorrow's. The world ends at the end of a teenager's arm, and Sartor's no less self-absorbed than any of us were, which she admits to candidly in her closing essay, shyly nodding along with George Orwell, who said that "Autobiography is only to be trusted when it reveals something disgraceful." (Though Sartor's transgressions are less disgraceful than unfortunate.). But her religious and spiritual questing is genuine, and her attempts to struggle piety and seriousness with a sixteen year-old's narcissism and growing, confounding anxieties are moving. And the world beyond Margaret and her family and friends forces itself into her consciousness at times, resulting in the book's humorous moments, as external and internal affairs do battle:


January 10: I saw so many people die in a movie tonight (The Towering Inferno) that I started crying & praying for them. Mary called to say she is getting married and she wants me and Stella to be bridesmaids.

January 12: Watched the Super Bowl with Tommy and Jackson. The strong attraction to Jackson is still there, but feeling so much love can't be a bad thing.

August 8: President Nixon resigned. Made appointment to get my haircut.

Because teen years are often defined by clashing priorities and emotional needs, many of Sartor's entries possess whiplash observations in the same sentence: family to God to losing weight to Prom! to solemn horse riding. It's very effective, and at times gripping writing. What I'm wondering about is this: a diary is autobiographical, but is it autobiography? Sartor opens and closes her book with essays that put her diaries in historical context, and she writes about recovering them and present-day meetings she had with figures from her past, but she doesn't explore quite enough for me the implications of the self as subject, its possibilities and limits. There's a heft that seems to be missing from Miss American Pie, something I noticed the day after I finished reading it, when its resonances were less than I thought they would've been. Details alone do not make autobiography; those details need to be circled, opened, entered, doubted, accepted or denied. Interrogated, anyway. Oscar Wilde said that "Memory is the diary that we all carry about with us," but it isn't, because a diary is selective remembering. This is what I'm going to say now, not that. The not—what we elide, ignore, willfully or otherwise—matters as much as the this, perhaps more so.

Sartor seems to recognizes this. In her closing essay she writes, "We do not know ourselves,"


This is what I have learned. Having read through my diaries, my private past has taken on qualities it did not have before. For one thing, it's no longer private. Autobiography is necessarily limited by the mind's locked drawers and the author's skewed perspective, but putting it plainly, the girl in my story would have been nicer and wiser were it not for the misfortune of written evidence. The lives described in my diaries, including my own, are depicted only in part, imperfectly, and seen only through my adolescent eyes. What I chose to record begs the question, to me as much as anyone, of what I left out, and why. A question I can't fully answer. But to paraphrase the Apostle Paul, until the perfect comes, the parts will have to do.

Good stuff. I'd only quibble with this: the locked drawers aren't really locked, are they? If they are, writers can—must?—pick them.
Posted by Joe Bonomo at 12:36 PM

Very interesting, Joe. While her structure makes the book sound very artless and unsophisticated, her framing comments are very subtle and sophisticated.

As a memoirist I'd love to have that stuff but have learned to be wary of what it can lock you into. Paging Vivian Gornick per the writer's persona and her real story.

Exactly, Richard, I was thinking of Gornick while reading. I'd love to experience reading my old diaries, but I never kept any.