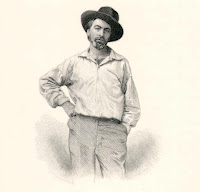 In her 1996 essay "Resolution and Independence: John Berryman's Ghost and the Meaning of Life," a memoir of John Berryman with whom she briefly studied, poet Madeline DeFrees writes about hearing Walt Whitman read aloud for the first time.  Berryman recited passages from Song Of Myself at a public event, and DeFrees was so moved that she had to leave the reading.  After finding some solace in a nearby empty room, she was discovered by her friend and fellow student Bruce Jackson, who was concerned, and who would ultimately compile some Whitman for her in a kindred-spirit gesture.

DeFrees' overwhelming response to hearing Whitman was complicated, and deepened, by the fact that she was, at the time, a nun at the Sisters of the Holy Names of Jesus and Mary, where her sobriquet was Sister Mary Gilbert. With hindsight, she writes:


By that time, I had let down my guard with Bruce and could tell him with great hilarity what a radical shift the title of Whitman’s poem signalled for me. Our Mistress of Novices had believed that to say myself with accents on both syllables indicated large reserves of egotism. Unfortunately, the word occurred in the vocal portion of the evening prayer, routinely read aloud in chapel by a succession of novices. All of us were trained to say m’self, trying our best to minimize the reflexive pronoun. Religious modesty demanded this kind of attention: and for Thy sake I love my neighbor as m’self.

I told Bruce about the intense inner conflict this created for me. Should I obey without question, or should I be loyal to the language? When it was my turn to lead prayer I put the language first, hurrying past the offensive term, but avoiding the contraction. I was not sure whether I could get away with it, but nothing was ever said.

It's interesting to read about Whitman's physical self-singing as filtered through spiritual self-abnegation, something I imagine that Whitman would've had a thing or two to say about.  After DeFrees, I'm reminded of my own brief history with being an altar boy—hardly a calling as dramatic or meaningful as DeFrees', yet an experience that was marked by intensity, often born in the clashing of my ego with my service.  That I was helplessly in the throes of puberty at the time didn't help, as the girls' round and rounding bodies in the pews threatened to render my modest cassock meaningless (metaphorically, anyway).  Yet such humming sexuality—inevitably heightened by stuffy, churchy decorum—was often relegated to my own sense of myself minus others, the complicated and seductive world ending at the end of my arm. 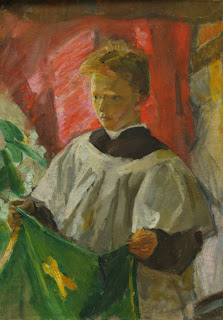 Like so many pre-teens at the cusp of teendom, I struggled mightily to focus on the mass as I served—a duty for which I enthusiastically volunteered at St. Andrew the Apostle, a duty in which I was genuinely interested.  As a beginner altar boy (girls weren't allowed to serve yet, hence there was no need to employ the gender-neutral term "altar server") I was often assigned the duty of acolyte—or, taper-lighter and -bearer—and my seat during mass was along the side of the altar, where, languishing, usually hot and uncomfortable in my cassock and dress pants, I'd wander far and wide mentally, at times bored stiff.  Later, I advanced to participating in the consecration, carrying the chalice and the Missal to the altar, assisting the priest in receiving the bread and wine, presenting the bottles (cruets) of wine and water for the priest to pour into the chalice, pouring water over the priest's hands, occasionally ringing a small black bell to indicate transubstantiation.  I'd receive the sign of peace from the priest—rare!—and accompany him with the other altar boys at the end of mass as we left, or recessed from, the altar, all eyes on me (or so I dreaded/hoped).  These activities brought me literally closer to the altar, in that I was now seated next to the priest during mass.  This proximity, and especially the washing of the hands and handling of the drying towel and the altar materials, at times lent a heft and tangibility to serving that I hadn't experienced as an acolyte during mass, or during the Station of the Cross.  My attention at the altar was usually well-focussed—by enchantment and by seriousness of purpose, but also by necessity, as I didn't want to screw up and anger the priest, especially one grim, always grouchy Father who, I learned years later, left the parish to receive help for alcoholism.

But just as often my attention wandered—to the girls, to homework, to the recess politics and the dread of Monday, or to Mark Belanger or Graig Nettles or Joe Theisman.  I was, far more often than not, immersed in myself, each syllable braying inside me, clamoring for secular attention.  I was indoctrinated at school against such egotism while in church, though certainly not as severely as was DeFrees, but my self took little heed.  I, in fact, couldn't have cared less about where the self met the spiritual; with some rare exceptions, and this saddens me to write now, my altar serving often felt obligatory come Sundays.

I possess an image now that's become representative of the years I served, meaning that I need to be sceptical of its accuracy, but mindful of what it's trying to say to me.  One of the requirements of serving at St. Andrews was the occasional morning mass duty, dreaded by all except the most devout of us kids.  When your name came up, you had to serve a week's worth of 8 a.m. mass, a tradition I now see as a wonderful thing to make a sullen teen do.  But at the time....

There were, maybe, five people who attended daily mass on a regular basis, one of whom wasn't a member of the clergy.  To a 12 or 13-year old it felt like a foreign country.  I recall sitting on the folding chair on our front porch waiting for my mom to drive me to church that week.  It was bitterly cold, I was tired, cranky, and full of anger and self-pity that I had to get up an hour before my classmates, be driven to school!, serve mass in a virtually empty church, and then endure an interminable school day and whatever drama and melodrama awaited me there.  I sat on the porch with my head in my hands, bemoaning my fate.  This was as far from selfless as I'd ever get in relation to serving mass.  My self, myself, so enlarged and all-encompassing it is a wonder that I fit in the station wagon where I sat, surly and—in mournful retrospect—treating my tireless mother with icy silence.  I don't recall any moment serving that week where I left my egotism behind, where I embraced, in the halting, timid way that a pre-teen can, the spirit and the transcendence of mass.  This I regret.


Cropped cover of Song of Myself via Shambhala Publications.  Altar Boy by Herime Steller via Photography by Charly.
Posted by Joe Bonomo at 10:50 AM

Thanks, Richard. That is a tough one: the wandering heart, the restlessness of the heart, the heart's capacity to imagine rather than forebear?