Kopp on the Killer

Over at Musoscribe, Bill Kopp takes on Jerry Lee Lewis: Lost and Found:

It’s walking a fine line to write a book that (a) tells the story one wants to tell and (b) uses lovely and descriptive language to do it but (c) writes in a way that doesn’t attract undue attention to the writing style. Bonomo wins on all three counts with this book. Here’s a representative sample of the heartfelt, rhapsodic and colorful writing found in this book’s pages. Describing Lewis’ early trio on the 1958 track “Lewis Boogie,” Bonomo writes:

As is the case with Jerry Lee’s great early Sun recordings, Van Eaton and Janes don’t so much accompany Jerry Lee as they come along for the ride – the rhythm track swings beautifully, and Van Eaton’s and Janes’ participation is crucial to the sound and vibe of the tune, much in the way that the shotgun-rider and backseat clowns are crucial for any drunken joyride.

Damn, I love that imagery: you can almost hear the music while reading the pages.

Jerry Lee Lewis: Lost and Found mostly concerns itself with Lewis’ landmark album Live! At the Star Club Hamburg in 1964, and with Lewis’ eventual turn toward country and western music toward the end of that decade. But those major turning points are placed into the needed context—musically, chronologically, etc.—so that they make sense. Though Bonomo’s story is ultimately a personal one, the reader need not be well-versed in Lewis’ life story to gain a great deal from reading.

In fact, hours spent with Jerry Lee Lewis: Lost and Found will almost surely send the reader to his or her choice of media to listen to the Killer’s best work. And ultimately, that’s one of Bonomo’s primary goals with this book. 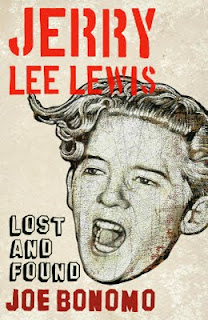 Lost and Found is out now in paperback.

I recently spoke about the book on WLBK with DeKalb Public Libary Director Dee Coover.   You can listen to the interview here: