There was little that penetrated my sleepiness most mornings that particularly vaporous summer of 1987; I'd begun working for a local temporary agency which staffed Maryland, Virginia, and Washington D.C. libraries with part-time workers.  These are institutions often desperately short of help, I was soberly informed, and this service provides necessary and rewarding staff-assistance that....

What I wasn't told until later by Mandy, Telesec's pleasant Placement Director, was that the work was, of course, tedious and mind-numbing. My initial job site was the first of many austere and wholly-foreign tax libraries I was to wander into over the next couple of summers: I was the anonymous young temp one might notice after lunch hour, toiling in a sterile, chalky cubicle to alphabetize the Library of Congress book order-forms, or organizing a more efficient system of routing periodicals to the partners and junior-partners, or setting to the task of refiling the multiplying government dockets received each Monday morning from Capital Hill. 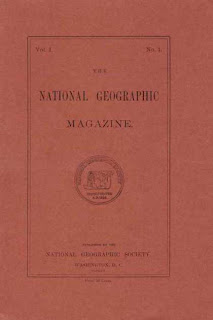 The money was good. And, to be fair, Telesec was consistently good to me during meager summers, and on occasion landed me the rare, offbeat-and-interesting job: for instance, heading a team of motley temps at the Museum of Natural History’s staff library hired expressly to merge that mammoth institution’s entire Library of Congress and Dewey catalogs, I was able to peruse the first, original copy of National Geographic with my very hands (although I probably was not allowed to). When I held, shaking and somewhat fearful, that first issue, history—and its history—became a tangible presence, the returning of the past to me. The pages felt thick, abstruse, as if the past had deepened itself into the fabric of the page much as personality can deepen into character, and character into wisdom. I remember feeling a funny blend of excitement, nerdiness, and fear, less that I'd be reprimanded by supervisor (unlikely, as she rarely left her tiny metal desk in the back) than that I'd be teased by my fellow temps, whose highlights of the day involved ascribing different girls names to the endless trucks of books that thundered off of the dumb waiters, and stinging games of Rubber Band Wars, of which I sometimes found myself in the middle, dodging rocketing rubber bands in the stacks. Their teasing would've been good-natured; we were adults, after all (save one colleague whose single burst of inspiration my way came when he mournfully informed me, concerning vexing women, "It's a poor soul who's only got one hole."). But I felt that they would've found my excitement curious, at best.

Many years later, I think about holding a relic. That issue of National Geographic was nearly a century old when I held it in my hands. Try as I might to resist the simultaneous temptations of sentimentalizing the past and frowning at the present, I can't help but feel that a century twenty-five years ago might feel like a millennium now. I'm sure each generation bemoans, or at least takes note of, the speed of its present versus the languor of its past, perhaps without value judgement, but things are radically faster now than at any point in human history, and the past recedes at lightning speed. Of course, the older one gets, the further into the past the past vanishes; though not news, this still rankles. I was young when I held that issue in my hands: my childhood ended the month before; adolescence just a week later; I didn't have a whole lot of perspective yet. But I sensed the gravity of perspective, of distance, before I could adequately essay it.


Record Store Day is an internationally celebrated 24-hour window into the past. "The original idea," says the official website, "was conceived by Chris Brown, and was founded in 2007 by Eric Levin, Michael Kurtz, Carrie Colliton, Amy Dorfman, Don Van Cleave and Brian Poehner as a celebration of the unique culture surrounding over 700 independently owned record stores in the USA, and hundreds of similar stores internationally. This is the one day that all of the independently owned record stores come together with artists to celebrate the art of music. Special vinyl and CD releases and various promotional products are made exclusively for the day and hundreds of artists in the United States and in various countries across the globe make special appearances and performances." The organizers add: "A Record Store Day participating store is defined as a retailer whose main primary business focuses on a physical store location, whose product line consists of at least 50% music retail, whose company is not publicly traded and whose ownership is at least 70% located in the state of operation.  (In other words, we’re dealing with real, live, physical, indie record stores—not online retailers or corporate behemoths)." 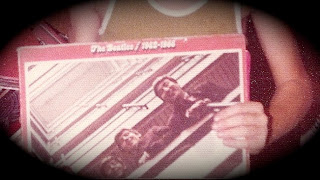 My personal honoring of Record Store Day was tempered a bit with the loss of Record Revolution, DeKalb's great, locally-owned, long-standing holdout against corporate behemoths, a place where I could still buy records and replace/refill my Discwasher D4+ vinyl cleaner kit. The shop closed up a couple of years ago, but I frequent the record stores in Chicago as often as I can. At the risk of sounding sentimental (too late), I miss holding vinyl. Of course I'm not alone in this, and sales of vinyl are improving, and many of my twenty-something students are purchasing vinyl beyond gestures in hipster irony, and the DJ culture never turned its back on the 12-inch. Hey I bought a 45 single two days ago! But the golden age of vinyl is finished. History: Christmas mornings with album-sized gifts under the tree, or the requisite joke come birthdays: "I got you a square pancake!"As with the slow vanishing of any cultural artifact into obsolescence, there's sadness and melancholy to wrestle with, but there's also a necessary girding for an inevitable future: this too shall pass, man up. It doesn't really matter, and I'll say it again: I miss holding vinyl, I miss the size of albums, humorously huge now, less against CDs than invisible mp3 files. I miss the art, lo and hi, of cover canvases, I miss peeling away the shrink wrap—and I can still smell the insides of my favorite record stores growing up, from Kemp Mill Records and Backstreet Records in Wheaton, Maryland, to Yesterday and Today in Rockville to Record and Tape Exchange in College Park....

What I miss, I think, is heft. Ballast. Thinginess, stuff in my hands, tangibility. Which generation will be the last to grow up with turntables in their house? Not my nephews' and nieces'—their parents have albums and stereos boxed up in the attic or basement; will their children's generation scoff at turntables the way mine scoffed at hand-cranked phones? I don't know that the vinyl album will ever go the way of the first issue of National Geographic—storied, antique, archival, important enough—but someday somewhere a kid might hold the last produced vinyl edition of an album, until albums too disappear, and he'll feel the mourned weight of something that he won't be able to name. But all of this sentimentality and misty-eyed longing: what is the use, where is the news?

Image of first issue of National Geographic (1888) via Cover Browser
Posted by Joe Bonomo at 7:27 PM