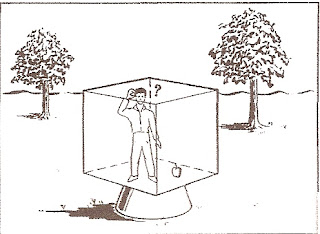 When a writer circles himself, essaying the self for subject, he's aware of Montaigne's many selves and so he circles more, in ever-widening circuits, enacting the great paradox of autobiography that the further we get from ourselves, the clearer we see ourselves, but now there are too many people events places in his generous circles so he asks himself, am I writing autobiography or biography? and remembering those many selves he tightens the circle a bit, honing in back on the "I" but all of those people events places he encountered in his movement away from the self have affected him so he includes them again, but now the circle's getting crowded so he excises some of those people events places and now, yes, the focus is back! so he circles himself more trying to capture in language his many selves but what is truth after all and so he includes the circling itself in his very subject, now admits that, yes, it's all fool's gold, this attempt to make sense, to filter the world through himself, and if the world ends at the end of his arm, which it does not, how to account for all of those people events places that his very arm points toward or tries to sweep away? and so he cirlces back out in an attempt to present not a self but a world (Hampl) but this isn't what he wanted to do, he wanted to write about that day as it dissolved into that one and that myth as it collapsed into the trite time and now it seems that in writing about himself he's become a prism through which it all passes, he guesses now that this is true autobiography, that every biography is a secret autobiography and that every autobiography must be a generous biography, too, and now he's tired, too much circling so he calls it a night, and when he sleeps he dreams fictions of his life, stories that made profound sense as he slept and no sense when he awoke ("A novelist is, like all mortals, more fully at home on the surface of the present than in the ooze of the past," Nabokov) and he realized with a start that an essay can be like a dream—it’s difficult to maintain that forward momentum, thinking essayistically = interrupting the flow, allowing in tangents, because among the reoccurring dreams he has is seeing a band live and invariably, the dream—which is narrative, and never absurd or surreal—never gets past the first song, the band stops playing, or something distracting happens in the crowd or outside the venue, and this helps him a bit though he can't say why and so he circles some more, remembering Montaigne's many selves, and sighing, he circles back
Posted by Joe Bonomo at 9:15 AM