Some Perspective on Alison Bechdel

“I think that’s probably a good model for memoir writing: acknowledging the inadequacy of your own methodology. And it’s all inadequate, really, memory and documentary evidence alike.” 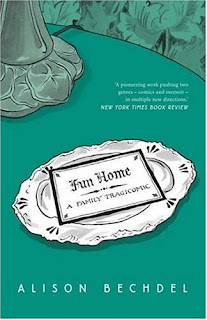 That's Alison Bechdel glossing not only her brilliant graphic memoir Fun Home, but the very notion of writing autobiographically.  Bechdel uses maps, photographs, letters, texts from books, handwriting, diary entries, typescript, cutaways, transparencies—all graphically rendered.  The photographs we see are, of course, not photographs at all but Bechdel's drawings.  She's hardly a photo-realist—she lacks the skill or the aesthetic interest—and that would defeat the purpose, anyway.  The photos in Fun Home reveal phantasms and personas that she remembers, or wishes to forget; her re-presentations of the photos are guided by her subjective interest in them, need for them, and I wonder how her subjectivity renders this face more shadowy than the photo says, or this body-language more culpable than the photo insists.

What I find especially interesting in Fun Home is Bechdel's playing with perspective, obviously a prime concern for any autobiographer, but for the graphic memoirist even more so.  A conventional autobiography is written in the equivalent of a point-of-view shot in a movie: here's the world as I (character, persona) see it.  I've always been intrigued by modes of remembering, specifically how our perspectives shift as we recall.  Here's what I saw, but what did I look like seeing it, and what did you see from over there, and what might I see from the top?  Fun Home moves among first-person, third-person, and impossible perspectives, though the majority of panels are drawn in third-person.  Bechdel's telling her story, but she's also telling a story with characters, scenes, and plot, and she makes the choice to render herself as part of a community, in front of and part of the places in which she lives, and remembers.  Her choices ask: what do we see when we remember, and how does our remembering change what we saw?


Autobiographical writing demands a blend of perspectives.  In Brothers and Keepers, John Edgar Wideman, frustrated with writing his and his brother's stories, finally gives the narration over to his brother: here, it's your story now.  Capote disappears entirely (though, of course, not really) in In Cold Blood; in The Night of the Gun David Carr investigates his own life as if it belonged to someone else; in his new Last Day On Earth, David Vann entwines his perspectives on and experience with guns and violence with that of a psychopathic killer.  No one exists in a vacuum, and Fun Home dramatizes this powerfully.

What can a graphic memoir can do that a conventionally written memoir cannot? I'm not sure how to answer that—or if, in this era of collapsing genre/form distinctions, the question matters very much—but I'm certain that Bechdel's labor-intensive model literally shows us what we might not otherwise see in a word-based memoir.  Look at the the panels above.  As in any first-person writing, we virtually, empathetically, step into the narrator's shoes, or in the case of the first panel, Bechdel's hands.  In a brave and bizarre move, Bechdel offers us a devastating point-of view shot in the second panel, the last moments of her father's life, an imaginative leap if there ever was one.  In the third, we see a characteristic blend of first-person and impossible perspectives, a kind of hyper-realism that insists on representing how the brain really thinks, sees, obsesses.

In the bottom two panels, Bechdel says this: my memories of leaning into but not quite falling over to my dad, and of leaping into his arms at the public pool—both common moments in adolescence—gain from the telling.  We two people in this strange, tragic family are two people in the world, acting out our inconsequential dramas as road versions of the same dramas occurring somewhere else.  Bechdel seems to argue that what matters more than her first-person perspective of leaning and leaping toward her father—as crucial and everlasting as that is—is the drama she and her dad create as an image of family, love, conditions, secrets, joys, and sorrow.  Ezra Pound: an image is "that which presents an intellectual and emotional complex in an instant of time."  Memory has many moving parts.