Scorsese and Harrison Living in the Incomplete World

An admission: I'm usually lazy critically when it comes to the Beatles.  I've been a Beatles nut for nearly forty years and it's often more fun to enjoy them rather than to consider them.  This is the case with my critical relationship to Martin Scorsese, too; I'm a huge fan, and though I certainly have been disappointed with his lesser movies I'd often rather simply love the work of his that I love.  This is the pleasure principle interfering with objective criticism, and I'm not necessarily proud of it. 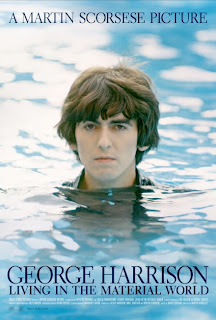 And so I watched George Harrison: Living in the Material World with pleasure—enjoying the footage I hadn't seen, the personal artifacts from Harrison's life, the interviews, Scorsese's evocative, at times impressionistic editing, Phil Spector's wild bug eyes—but I also couldn't help but be disappointed.  This is less a documentary about Harrison than it is a Promotional Film from the Harrison Estate, unsurprising given that Harrison's widow, Olivia, executive produced the film, but unexpected given that the film was made by Scorsese, a filmmaker never afraid to essay the darker side of humanity.  Recently at Slate Bill Wyman took to task certain music documentaries, specifically the Harrison film and more generally Scorsese's music nonfiction films (on The Band, Dylan, the Stones).  "We're living in the age of the schlockumentary," Wyman wrote. "Ideally, a documentary should have an arm's-length distance between subject and chronicler. And one hopes that the director is there in service of the viewer, not the subject. In the arts world, that ideal is getting harder and harder to find."  Certainly Scorsese's rock and roll fandom could lead him close to hagiography, but I was hoping that what had interested Scorsese in Harrison was Harrison's lifelong push/pull between stardom and privacy, between the secular and the sacred.  Scorsese's pretty familiar with these extremes, and his best fiction films dramatize the tensions that they create.

But Scorsese seems uninterested in presenting Harrison as a round character, E.M. Forster's definition of a dynamic person who's defined by conflict and contradiction and surprise, as opposed to a flat character, who's unsurprising, static.  As readers (or watchers of movies, listeners to narrative songs) we care about round characters: they move us, we have stake in them emotionally.  Scorsese's most indelible creations are round and complex: Henry Hill; Travis Bickle; Rupert Pupkin; Jake La Motta.  I was hoping that Scorsese would treat Harrison the same way he treats his fictional protagonists, that is, mercilessly, but with heart-breaking respect for their humanity.  As a man devoted to spiritual journeying, Harrison is obviously close to Scorsese's wandering heart, and a subject ripe for exploring the kind of fraught journeying that mark all people searching for God.  We get some conflict in Living in the Material World, but it's softened by the selective glow of friendship, memory, nostalgia (and, likely, the Harrison family's controlling hand).  Harrison's infidelities are touched upon, as his is drug abuse and his famous ire (Ringo describes Harrison's "bag of anger"), but we never get very deep into them, into the crises, character traits, and sensibilities in Harrison that drove him from the dark to the light, and back.


certainly suggests an interest in what is actual, what exists, rather than what one brings personally, if not irrationally, to the table of present-day actuality.  Documentary evidence substantiates what is otherwise an assertion or a hypothesis or a claim.  A documentary film attempts to portray a particular kind of life realistically; a documentary report offers authentication of what is otherwise speculation.

"Present-day actuality" and realism are obviously subjective states, and, as I've written elsewhere, every biography is a secret autobiography.  But rather than lessen or invalidate his documentary, I was hoping that Scorsese's private/personal intersection with Harrison's struggles would've enriched the film, made it into a kind of auteur nonfiction, dramatizing fight and surrender, pleasures and selflessness.  We get mostly lip-service paid to Harrison's personal flaws, which are backgrounded behind his marvelous generosity and genuine spirituality.  I've no doubt that Harrison was a spiritual man convinced, wryly but passionately, that the material world is little but diversion and deception.  But this view feels incomplete.  I would've liked to have seen more about the power and temptation of those diversions, which to any of us can feel as overwhelming and necessary and valuable as that which is more profound and unworldly.  I would've liked a little more foul Piggies to balance his Sweet Lord.
Posted by Joe Bonomo at 11:17 AM