The Killer, now in paperback

In a few weeks, Continuum will reissue Jerry Lee Lewis: Lost and Found in paperback.  In the book, I discuss at length and in detail the ferocious performance that Lewis gave at the legendary Star-Club in Hamburg, West Germany on April 5, 1964, backed by the U.K.'s Nashville Teens.  The show was later released as Live at the Star-Club, one of the greatest live rock & roll albums ever cut.  I discuss Lewis' career up and downs that led him to the Star-Club gig—the evening of the day in which the Beatles filmed the opening sequence of A Hard Day's Night, one group ascending in popularity, one artist descending—and then discuss Lewis' career resurgence in the late 1960s as a major hardcore honky tonk country artist.

Here's my description of "Mean Woman Blues," the opening track on the album:

Thank you, thank you very much ladies and gentleman.  I’d like to say it’s a pleasure, a great honor, to be back at the fabulous, most beautiful, I mean really swingin’ Star-Club.  Yeah!

“Mean Woman Blues,” the lead cut, is nothing short of a mini concert in and of itself.  Loch chose well: Jerry Lee had released a version of Claude Demetrius’ song on an EP in 1957, a few months after Elvis Presley had issued his own take (on the Loving You film soundtrack).  Elvis’ version was fun, swinging, and pretty dirty for the late-1950s, and he clearly has fun taking the risk.  Jerry Lee’s version is typically perverse in that the subject of the song shifts from a woman who’s so mean that she fucks with an angry face, to…well, to the Killer himself, who pinches the spotlight in the first verse and never relinquishes it.  Oh, the mean woman gets a nod or two, mostly in the form of lascivious ogling of ruby lips and shapely hips, but apparently more urgent for Jerry Lee is a discourse on his love for coffee and tea.  As always, the lyrics take a back seat to their filthy delivery which takes a back seat to Jerry Lee’s piano playing which takes a back seat to nothing and no one.  By the end, “Mean Woman Blues” is the Killer’s only (with help from the rock-steady trio of Roland Janes, J.W. Brown, and Jimmy Van Eaton, of course).  And it’s become the standard bearer: when Roy Orbison released his version of the song in 1963 he assaulted welcoming charts with Jerry Lee’s arrangement, substituting his own name for Jerry Lee’s in a kind of a geeky, understudy eagerness that somehow works. 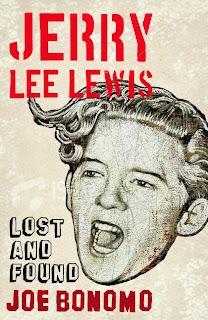 Seated onstage, he cocks his head, looks over his right shoulder at the smoke-filled crowd, lets a rolled “l” escape from juvee hall and issues a grand, onyourmarksgetsetgo glissando that leads to a suspenseful mmmm before the flag is dropped: I got a woman, mean as she can be! Barrie Jenkins, on cue from the cheers of recognition erupting before the first line is out, sprints out of the gate with a snare roll, and the forty-minute gallop is on.  What follows sets the benchmark for the rest of the album: loud, crashing, and impossibly fast.

“Mean Woman Blues” smokes.  Peter Harris’ bass is warmly recorded, providing ample road for Jerry Lee’s jalopy-joyride of a performance, and Jenkins and John Allen ably keep up, Jenkins punishing his ride cymbal in double-time and Allen battening down the hatches with a clipped rhythm, tossing out tentative licks at the ends of some lines—but for all intents and purposes the Nashville Teens sound astonished, as if they’ve awoken on a carnival ride at the crest of a steep hill.  Jerry Lee’s left hand is bedrock: sure, cocky, clock-perfect.  His right hand virtually stages a show itself: rooster-like in its swagger, proud, flashy.  Thirty seconds into the song and you can feel the sense of wire-taut fun and abandon, and the palpable fear that the whole thing might fall apart soon if the players aren’t careful.  The Nashville Teens pay close attention on the verses—remember, only thirty seconds before they didn’t know what song they were going to be playing—and hit the stops well, though the Killer rushes through them, impatient.

Soon the song arrives at the place everyone in the crowd is waiting for, the first solo—Jerry Lee lets loose a yeah-hah! and pistons his right hand in eighth notes while Jenkins and Harris squeeze shut their eyes and go along for the ride, borne aloft by a delirious whistle from the crowd.  The glissandos are hysterical now.  Jerry Lee tosses Allen his first guitar solo, which he plays well, raw and choppy, though it’s hard to hear in the mix and beneath his bandmates bashing around.  Jerry Lee speeds up and barks Go! to the band—impatient to get back on mike?  Testing the band’s endurance?  By the time the Killer does butt back in to holler that he ain’t bragging but you know it’s understood that when he does something he does it mighty good, it sounds like redundant boasting.

But in case the crowd isn’t convinced, he drops things down for a relatively quiet, minute-and-a-half break where he plays some fun with his right hand and gets cute vocally, and the tune loosens up and really starts to swing.  And this is where any cultural blockades that there might be between the Killer and his audience crumble, brick by brick. Alan Clayson makes an interesting observation: “Coupled with a time-honoured Teutonic fondness for heavy-handed rhythm, the directness of rock & roll’s repetitious lyrics enabled those adults who couldn’t comprehend a word of English to be swept along emotionally, even become superficially aroused, by ‘Hound Dog’ more readily than their opposite numbers in the U.K. who dismissed any opus containing ‘ain’t’ as gibberish, a guttersnipe corruption of the language.”  Robert Palmer was onto it, too: “Rocking out, REALLY ROCKING OUT the way Jerry Lee Lewis did on ‘Whole Lotta Shakin’ Goin’ On’ and still does every time he sits down at a piano, is the most profoundly revolutionary statement an artist can make in the rock and roll idiom.  It bypasses language, obliterates social conditioning, fulfils a basic human need for rhythmic movement, arouses primal hungers, and suggests how one can go about gratifying them.”  Palmer adds with a wink, “If you don’t believe me, go out and buy a fifth of Jack Daniels, get together with the sexual partner of your choice, and play the record again, real loud.”
What language barrier?  During the breakdown in “Mean Woman Blues” Jerry Lee’s yeah’s, oh’s, uh-huh’s, ooh’s, growls, and general vocal silliness elicit hoarse and happy cheers from the crowd.  No translation necessary, vielen dank, for the universal poetry of Rock & Roll, Bluster, and Sex; the Killer’s strong hands, his arrogant wide-leg splay at the piano, the countless lagers paraphrase the song just fine.  At one point in the show Jerry Lee joins in with the crowd as they chant Jerry, Jerry, Jerry…!  It’s the only word they really need to understand.

If you do purchase and read Jerry Lee Lewis: Lost and Found, I advise that you do so in a controlled environment.  There's some serious mayhem here.  A clip of Lewis playing "High School Confidential" on U.K. television a few weeks before the Star-Club gig: